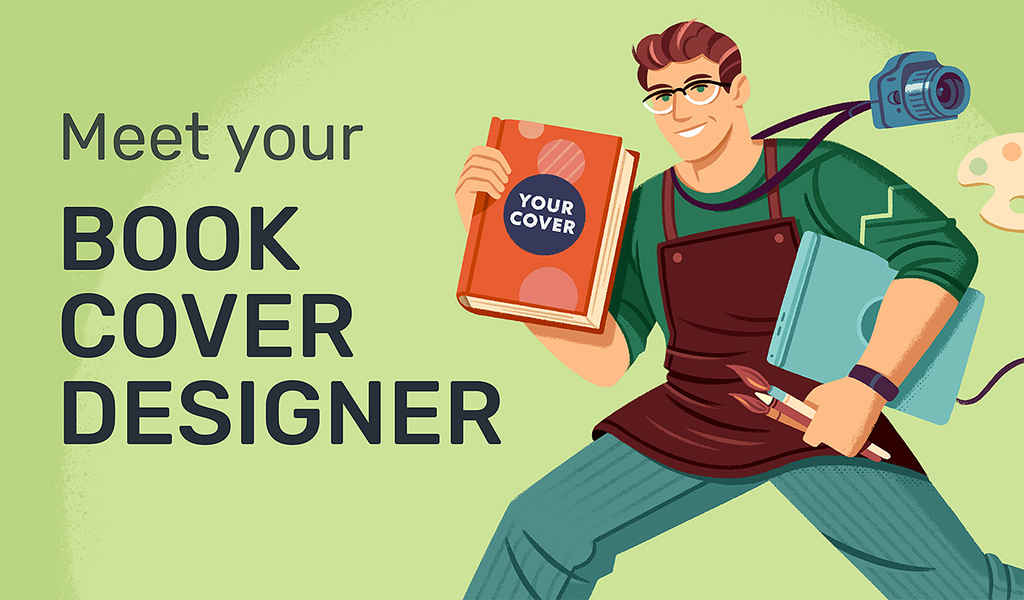 Choose from over 200 cover designers

Get free quotes from vetted designers today when you create your account.

Adam Bender's debut novel takes place in the Wild West. According to him, the landscape of self-publishing bears some similarities with that setting. In this article, he talks about how professionals helped him design his book and successfully navigate this new territory.

In my new novel, The Wanderer and the New West, a gunslinger goes it alone, fighting injustice in a near-future American West that fully protects the rights of armed citizens to stand their ground. Over the course of his adventure, however, the Wanderer learns the importance of allying himself with the right people.

In this new frontier of self-publishing — which can often feel a little like the Wild West — it’s easy for authors to take that word “self” a little too seriously. We say: “I’m a good writer — I can edit myself!” Or, “My teacher gave me a gold star sticker in art class – I can design my own book cover!” Then there’s that dark rider on our tails called self-doubt. We buy into the mindset that if literary agents don't jump at the opportunity to represent our novel, then it's not worth our own investment in good production or marketing.

"In this changing publishing industry, a good posse is key to success." @WatchAdam

While those inclinations may save some cash, they’re unlikely to do a novel any justice. Few writers can do it all, and there’s no shame in asking other to contribute their expertise to make a book what it needs to be. Authors, editors, designers — we’re all adapting to the changing publishing industry together, and assembling a good posse is key to success. After finishing The Wanderer, I used Reedsy to connect with professional collaborators to help me produce a novel that could stand side-by-side with traditionally published books.

Enter your email address for our #1 design resource.

Many self-published authors still hold out in investing in professional design services. As good as a story may be, readers do judge books by their covers — and are easily turned off by sloppy interior layouts too.

For my book cover, I wanted a pulp or graphic-novel style that would say to readers: “This is a Western, but it ain’t your grandpop’s Western.” That’s when I found Ben Mcleod.

Ben’s profile revealed he liked all the pop culture I was into, and the samples in his portfolio had this gritty epic style that looked ready for an oversized poster. I asked for a quote, and Ben quickly got back to me with an enthusiastic pitch and a reasonable price. I didn’t think twice.

"Books are judged by their covers, but a sloppy interior layout is a turnoff too." @WatchAdam

Ben started the cover design process by asking me to describe key scenes, themes, and images in my novel. I started by outlining:

To get the ball rolling, Ben sent back this initial concept based on my notes: 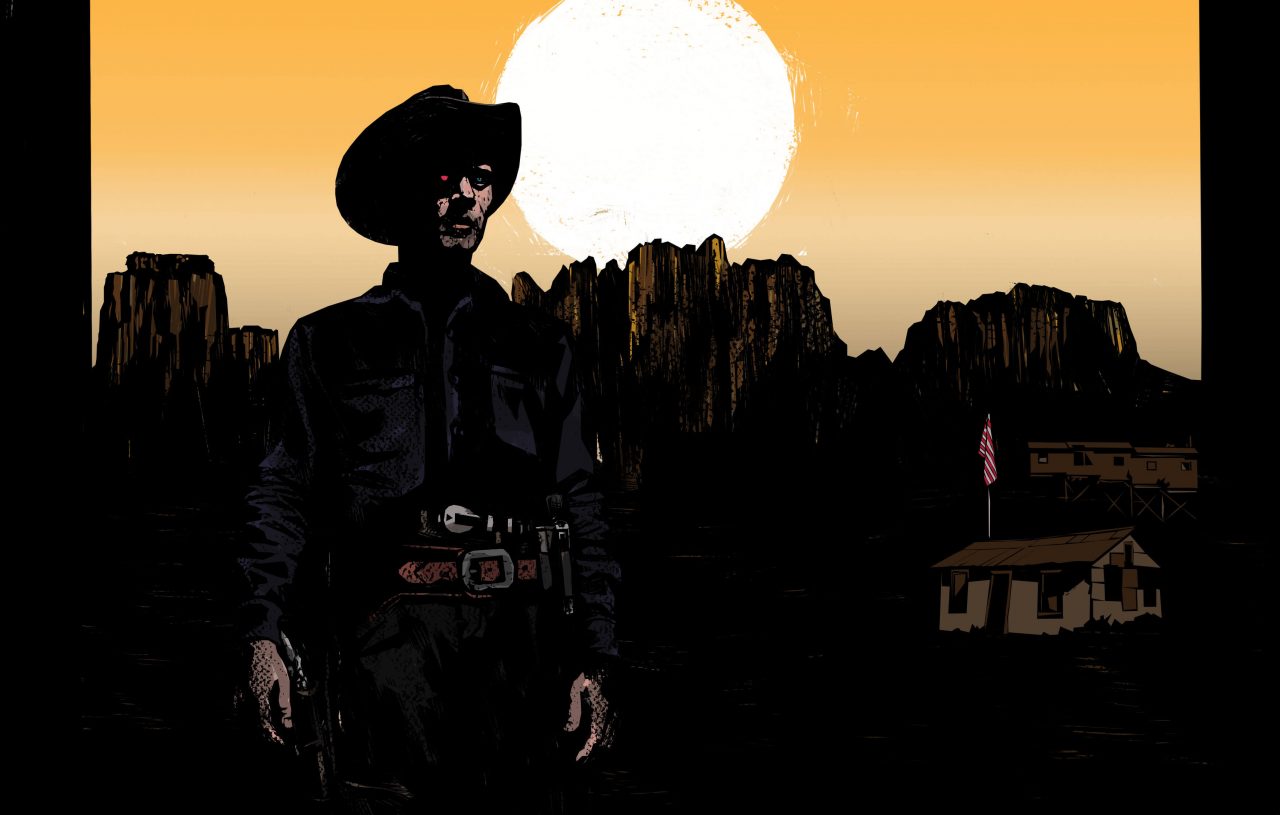 From there, we got to a near-final cover concept quickly. At first, I thought the reader might think the book took place in the past like most Westerns, so we brainstormed together some more modern elements like a road, power lines and street signs. We ended up overdoing this a little, making the cover look too crowded, so we started stripping it back again. It took a few rounds, but Ben patiently modified the cover until we got it where it needed to be. In the end, I was more than satisfied with the result: 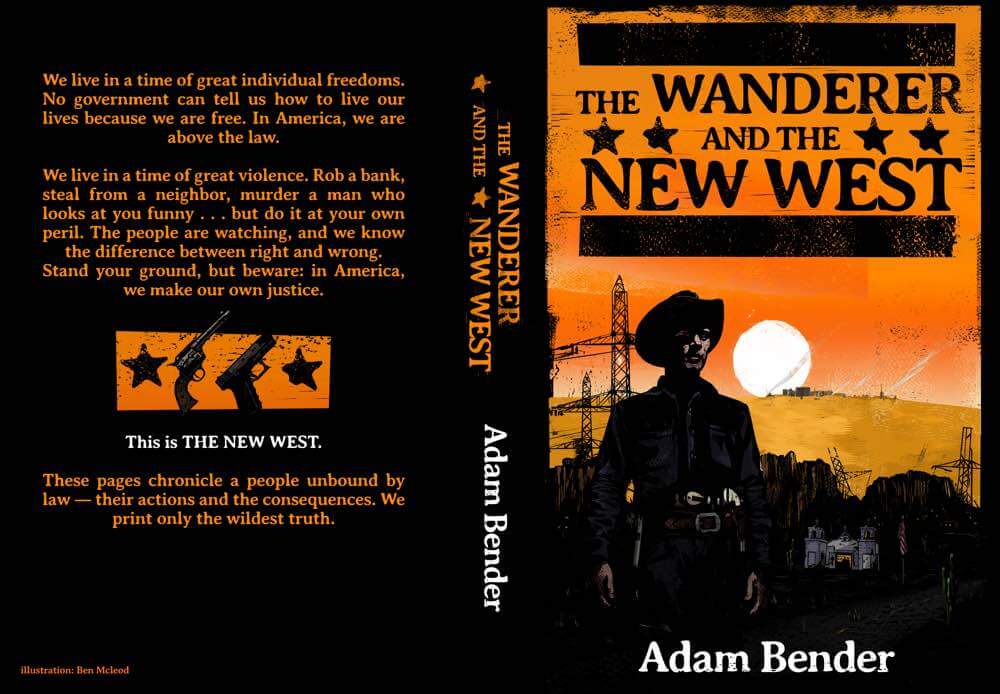 The book jacket looked great, but I still needed someone to lay out the interior and convert the whole thing to an eBook. This is something authors sometimes don’t spend enough time on because the inside of a book is “just text” and may seem unimportant. Not so! A book that doesn’t follow industry standards for spacing, headers, page numbering or countless other minor details will look majorly unprofessional. 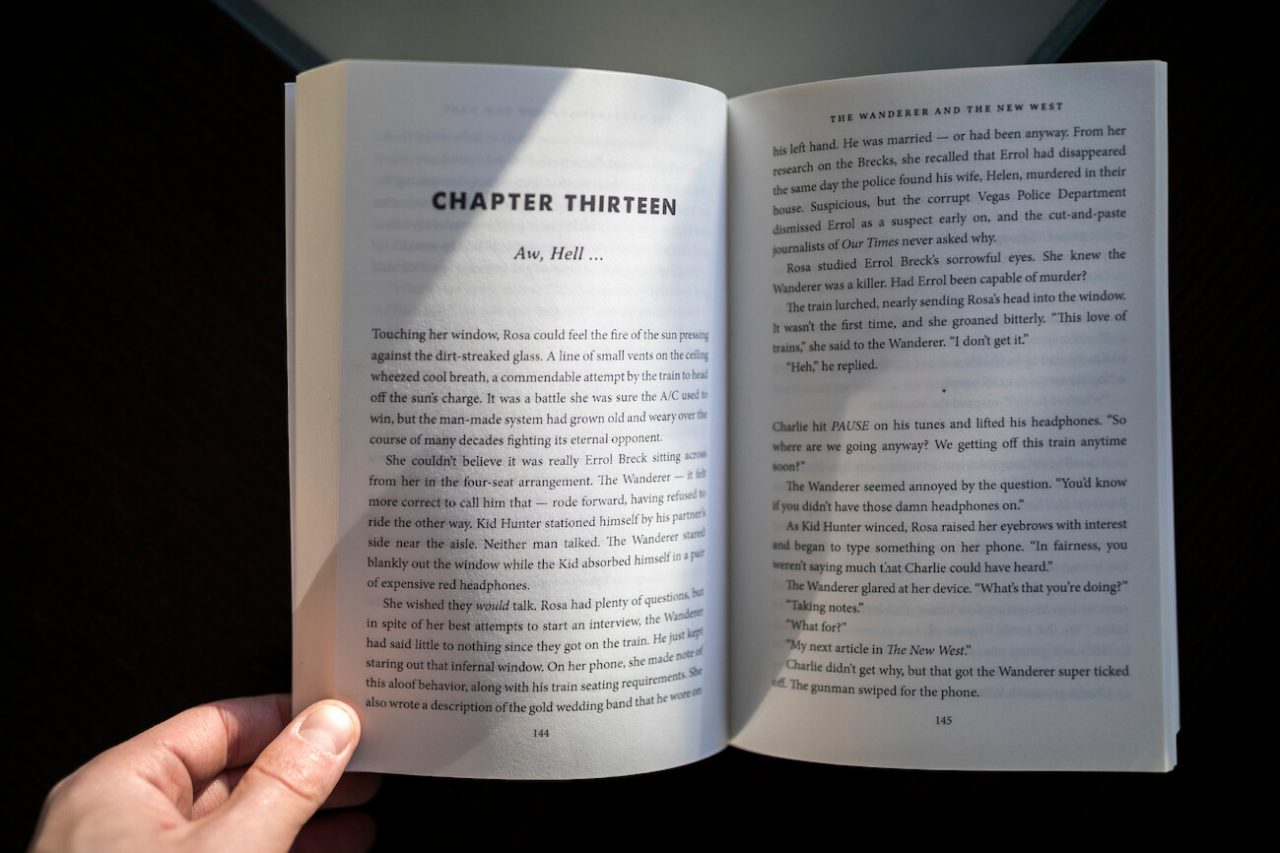 Mark Thomas came highly recommended by others on Reedsy. Ben had also worked side-by-side with him for another author and went the extra mile of asking the author for feedback on Mark — which was all very positive! After accepting the offer, I sent Mark my edited manuscript and the name of the font Ben used for the book title. I flagged some of the more complex elements in the novel, including blog-style interludes and tweet-style passages, and Mark suggested special styles to make this work without over-complicating the look of the book. 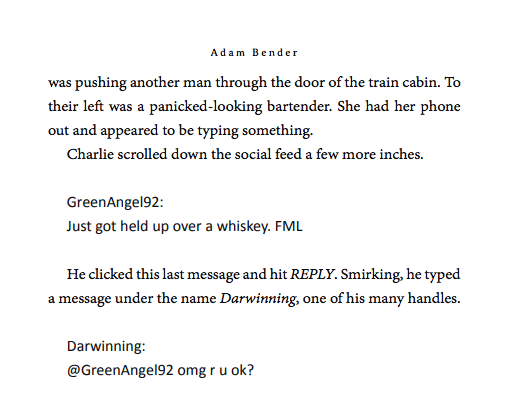 Mark sent me a draft of the interior and asked me to scan for problems. It looked great, but we went through a few rounds weeding out little imperfections. He responded quickly and in days we had a PDF ready for printing. He then helped me convert the print book into an eBook fit for a Kindle. This isn’t as simple as sticking the print version into an app and clicking “Change to eBook.” Some elements had to be simplified to work for digital reading. There were a few bugs, including some issues related to page breaks and spacing, but Mark quickly sorted them out. I was just glad it wasn’t me poring over the code!

The pride you feel when your book looks 100% professional? Priceless

The Wanderer passed a big first test when I received the proof of the paperback. The first thing I thought when I saw Ben’s cover was, “Hey, this actually looks like a book I’d want to read!” And when I opened it up, it looked like a real book too! I could see that the work of my diligent editors, Rachel Gluckstern and Jim Spivey, and Mark’s clean layout had been worth the investment.

Soon afterward, I scored a starred review from Kirkus Reviews and five-star ratings from five separate critics who reviewed the novel early on Readers’ Favorite. I couldn’t have done that without my gang of Reedsy collaborators.

"This new frontier of self-publishing can often feel a little like the Wild West." @WatchAdam

Not only did using Reedsy pay off for this novel, but the professional relationships I’ve built will continue to be valuable down the road. Even after finishing their jobs, my collaborators have been available for advice, and they’ve helped spread the word. Next time I venture out into the self-publishing frontier, it’s heartening to know I won’t be riding alone.

The Wanderer and the New West is available on Amazon and Amazon Kindle!

Please share your thoughts, experiences, or any questions for Adam Bender in the comments below!

Choose from over 200 cover designers

Get free quotes from vetted designers today when you create your account.