Native Finn, Tuire Siiriainen is an illustrator and the founder of Blueberry & Pie, a self-publishing company. With the help of a Kickstarter campaign, she published her first book through her company in August 2016 — a personalized children’s adventure called "Message in a Bottle." Read on to hear how the campaign was fully funded in just two weeks.

I was born in Finland, and have always seen stories around me. A lot of my inspiration came from my surroundings — forests, lakes, countryside cottages, and animals — but especially from children’s books. Rather than Roald Dahl and Dr. Seuss, my favorite authors growing up were Astrid Lindgren (author of the Pippi Longstocking series), or
Mauri Kunnas. Books about strong, Nordic children doing stubborn and seemingly foolish things have inspired me up to present day.

During university in Belgium, I studied marketing — which is a form of storytelling itself. While in school, I rediscovered the magic of drawing and returned to the picture books of my childhood. When I reached the end of my studies at the age of 23, I knew that I wanted to create my own picture book.

From a book idea to self-publishing

I was never fascinated by the idea of traditional publishing. To me, it seemed slow and stiff, and even though I’m the first one to acknowledge the value of a printed book, the ways of publishing them felt out-of-date.

Then I discovered the world of personalized children’s book and heard about print-on-demand (POD). It hit me instantly — this is how I want to create my book! I saw the unexplored possibilities of POD technology that would allow highly creative and inventive story concepts to come to life.

"I saw the potential of POD for bringing creative and inventive story concepts to life." @MIABBook

In the summer of 2015, my partner Wojtek and I came up with the idea for our first children’s book, Message In A Bottle, during one of our forest walks: A lone bottle with a message inside is found on a beach by an animal. On the bottle label, there is a name and an address. The animal decides to deliver the bottle to its rightful owner, and with the help of many other animals around the world, the message in the bottle finally reaches its intended destination — and the mysterious message is revealed.

The message in the bottle is created by the giver of the book, whether it’s a family member or friend. And the name and address on the bottle belong to the real child — the reader of the book. This is where the personalization aspect of the book come into play.

We hesitated regarding whether or not I should illustrate the book because I had no professional experience — but, we knew I could draw. In the end, my drawing passion, paired with the need for constant marketing artwork, led us to picking our illustrator: me. 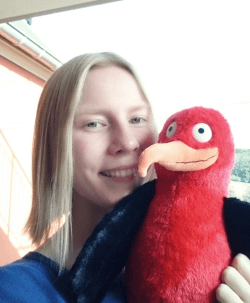 Wojtek and I wanted the story to include real geographical locations and for the bottle to be carried by the animals who really live there. To this end, we decided to hire Dr. Szymek Drobniak, an evolutionary biologist from the Jagellonian University. He joined our project with excitement, and with his help, we found our main character: a scarlet Hawaiian honeycreeper.

Of course, we also needed an author. I went through every literary agency with listed children’s authors in the UK — finding the right author proved much harder than we had initially anticipated. After seeing not only his writing style but also his visual language, we initially decided to go with the talented Tom Percival.

We also needed an excellent editor. After struggling to find the right match, we discovered Reedsy, and it was exactly what we were looking for. Through Reedsy, we found Judith Paskin who stayed with us during the whole project — helping us develop the structure of the story and the language, proofreading and making sure that every single comma was in their right place.

The final piece of the puzzle was finding our designer. Tom and Judith emphasized that the designer would be important for the structure of the illustrations, choosing the fonts, typesetting and preparing the book for the print house. As per their advice, we found the wonderful Verity Clark.

Kill two birds with one stone: pay for your production costs and sell your first 1,000 copies before you've printed a single copy.

The dream team was finally complete: an illustrator, a biologist, an author, an editor, a designer, and a digital agency that would build the website where people could personalize and order our book.

The project had so far been self-funded but we started encountering unexpected costs: legal fees, font license fees, extra equipment for the illustration work, etc. So, we decided to run a Kickstarter campaign.

Creating effective promotional material seemed to take even more time than completing the remaining illustrations. Tom, our author, created the campaign video, I prepared all the Kickstarter graphics, and we worked with professional copywriters to help us create the text for the campaign page. There seemed to be no secret sauce for a good Kickstarter page: short or long, super-detailed or broadly explained — there are examples of successful Kickstarter campaigns for all cases. But the hard reality was that 65% of all Kickstarter campaigns fail.

How we reached our Kickstarter goal

The start of a Kickstarter campaign is the most crucial moment for success. Many people with Kickstarter experience had advised me of the importance of have backers to support the campaign the moment it goes lives — this is because when the pledge sum is $100 instead $0, new visitors are more likely to join in and donate.

"The start of a Kickstarter campaign is the most crucial moment for success." @MIABBook

When we started “Message In A Bottle”, we had assembled a “Book Launch” group on Facebook, consisting of parents who gave us first-hand feedback throughout the creation of the book. When it came time to launch our Kickstarter campaign, they were hugely helpful with promoting the book on their social media accounts and blogs. This strong exposure at the beginning was vital for us in reaching our goal, and as a thank-you, we gave all the members of the Book Launch group free copies of the book.

Within two weeks, our campaign was fully funded.

My advice to other authors looking to create Kickstarter campaigns for their own books would be to really invest time into your campaign. Use the illustrations and sketches or even just the earliest drafts, and make the page visually reflect the book. Also consider offering interesting rewards — it’s fun if you can offer something more than just a book, especially when it’s a children’s book. An easy example would be black and white coloring sheets of the illustrations. 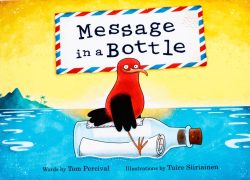 Our digital agency had been working on the “Message In A Bottle” website since May 2016. They had the big challenge of creating an online platform where it would be easy to personalize and order the book. This meant submitting the child’s name, address, country and a personal message for the bottle, personalizing the world map page to show the route Kiki took to deliver the bottle, previewing the personalized book and creating a print-ready file to be sent to the print house.

In July, all of the illustrations for “Message In A Bottle” were completed. And after countless website tests and print proofs, our website went live end of August.

Since the launch, we have delivered over 100 personalized books to children all over Europe: the Netherlands, United Kingdom and Germany to name few. It’s the reaction of children that has completely touched our hearts. Hearing how much they love their own personal book and how Kiki has become a beloved character in the whole family has been the most amazing reward.

One year ago I had no idea where to start in terms of publishing a children’s book. Now I can’t wait to begin my second one!

Fore more resources on writing and publishing a children's book, don't forget to check out these posts:

Visit the Message In A Bottle website to personalize and purchase your own copy!

If you've run your own campaign, what have been your positive or negative experiences? Did you have any learnings or takeaways from the experience? Leave your thoughts, experiences, or any questions for Tuire in the comments below.

Hi Tuire, This is all fantastic! so inspirational. I was in touch with Judith too to work on my Picture Book but that has been put on hold at the moment to complete my illustrations and work on my chapter book. Your website is delightful also! Oh I have so much work to do! Thank you for sharing your experience. PS your book is so tempting I am in the process of ordering! Kind regards Heather B. Moon (Children's author)

Hi Heather, Thank you for your comment and kind words! I'm glad if my story can help you in your publishing journey. Best of luck with your picture book - Judith is a great professional to work with so hopefully you two will eventually work together. Judith wrote a guest blog post for us about personalised children's book, which might also interest you: http://blog.messageinabottlebook.co.uk/personally-speaking-guest-post-childrens-book-editor-judith-paskin/ PS. A huge thank you if your ordered our book! Very best, Tuire

Thank you Tuire! Yes I will contact Judith again in the New Year. Thanks for the recommendation. Good luck with the sales of ' Message in a Bottle'.