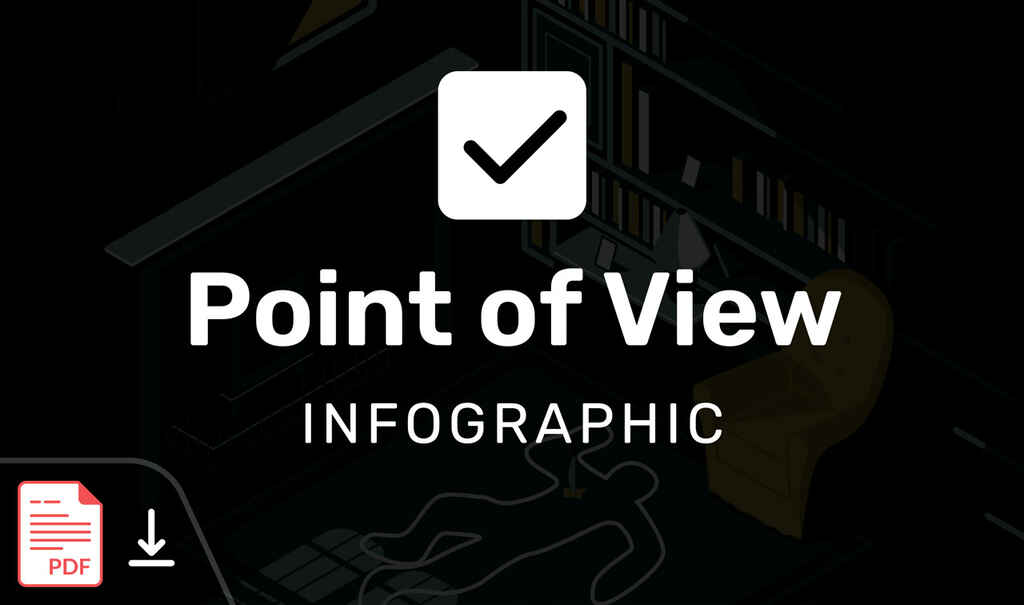 Point of View: The Ultimate Guide to Writing Perspectives

Point of view (POV) is the narrative perspective from which a story is told. It’s the angle from which readers experience the plot, observe the characters’ behavior, and learn about their world. In fiction, there are four types of point of view: first person, second person, third person limited, and third person omniscient.

This guide will look at each point of view, and provide examples to help you understand them better. Let’s dive in.

First person narratives are quite common and relatively intuitive to write: it’s how we tell stories in everyday life. Sentences written in first person will use the pronouns I, we, my, and our. For example:

I told my mother that we lost our passports.

First person can create intimacy between the reader and the characters, granting us direct access to their emotions, psyches and inner thoughts. In stories where the protagonist’s internal life is at the fore, you will often find a first-person narrator.

Having a single fixed narrator can limit the scope of a story 一 the reader can only know what the narrator knows. It’s also said that a first person narrator is biased, since they provide a subjective view of the world around them, rather than an objective one. Of course, this isn’t necessarily a bad thing, and intentionally unreliable narrators are fascinating literary creatures in their own right.

👀 What POV is right for your book? Find out in this ultimate guide to writing perspectives.

Genres that commonly use a first person POV

Young Adult. Introspective coming-of-age narratives often benefit from a first-person narrative that captures the protagonist’s voice and (often mortifying) internal anxieties. Some examples are novels like The Hunger Games by Suzanne Collins, The Fault in Our Stars by John Green, and The Catcher in the Rye by J.D. Salinger.

Science Fiction. In sci-fi novels, a first person perspective can nicely convey the tension and awe associated with exploring unfamiliar environments and technologies. Some examples of this approach include Project Hail Mary by Andy Weir, Flowers for Algernon by Daniel Keyes, and Ready Player One by Ernest Cline.

Memoir. The first person is perfect for memoirs, which allow readers to relive life events with the author. Some pageturners in this genre are Open by Andre Agassi, Educated by Tara Westover, and Becoming by Michelle Obama.

Second person narratives are far less common in literature — but not entirely unheard of. The pronouns associated with second person include you, your, and yours, as in:

You instruct the chief of police to bring the prisoner to your office.

Second person POV is all about putting the reader directly in the headspace of a particular character: either the protagonist or a secondary figure. When mishandled, this POV can alienate readers — but when executed well, it can create an intimate reading experience like no other.

Since this POV requires quite a lot of focus for most readers, it’s often suited to shorter, lyrical pieces of writing, like poetry. It can also be used alongside other points of view to provide variety in a longer novel, or to indicate a change of character (see: The Fifth Season by N.K. Jemisin).

☝️Don’t neglect the second person POV. It has its time and place. Learn more about it in this guide.

Genres that commonly use a second person POV

Creative Fiction. Short stories, poetry, and screenplays can benefit from the immediacy and intimacy of the second person. Two examples are The Brief Wondrous Life of Oscar Wao by Junot Diaz, or Pants are Optional by Aeris Walker 一 a brilliant piece from Reedsy’s Short Story competition.

Nonfiction. In self-help in particular, the second person can be used to ‘enter the reader's mind’, establish rapport, and guide them through a transformation process. For example, in Eckhart Tolle's The Power of Now many teachings are conveyed through a series of questions and answers written in second person.

Now that you have seen how second person narratives work, let’s meet some third person limited narrators and see how they handle things.

Everyone has read a third person limited narrative, as literature is full of them. This POV uses third-person pronouns such as he, his, she, hers, they, their, to relate the story:

She told him that their assessment of the situation was incorrect.

Third person limited is where the narrator can only reveal the thoughts, feelings, and understanding of a single character at any given time — hence, the reader is “limited” to that perspective. Between chapters, many books wrote in this POV switch from character to character, but you will only hear one perspective at a time. For instance:

“She couldn't tell if the witness was lying.”

The limited third person POV portrays characters from a bit of distance, and asks the readers to engage and choose who they’re rooting for 一 but this POV poses a challenge for authors when trying to create truly compelling characters. A limited perspective definitely adds intrigue, but writers should bear in mind that being able to tell only one side of the story at a time can limit their ability to reveal important details.

Genres that commonly use a third person limited POV

Romance. A love story always has two sides, and the third person point of view is ideal for authors who wish to convey both. Examples in this genre include Shadow and Bone by Leigh Bardugo, Eleanor & Park by Rainbow Rowell, and The Grand Sophy by Georgette Heyer.

Thriller. In suspense-driven plots the limited third person POV works well, since it’s fun to try and solve a mystery (or mysterious characters) alongside the protagonists. Two examples are Murder on the Orient Express by Agatha Christie, or Nine Perfect Strangers by Moriarty Liane.

A solid story structure will help you maintain a coherent point of view. Build it with our free book development template.

If you’re done with the intimacy of “close” viewpoints, perhaps we can interest you in one final POV — a God’s-eye view of storytelling.

The third person omniscient is as popular as the limited one, and uses the same pronouns. The difference, however, is that the narrator is “all knowing” — meaning that they’re not limited to one character’s perspective, but instead can reveal anything that is happening, has happened, or will happen in the world of the story. For example:

He thought the witness was honest, but she didn't think the same of him.

It’s a popular point of view because it allows a writer to pan out beyond the perspective of a single character, so that new information (beyond the protagonist’s comprehension) can be introduced. At the same time, it heavily relies on the voice and authority of the narrator, and  can therefore take some focus away from the character.

Genres that commonly use a third person omniscient POV

Fantasy fiction. In elaborate fantasy worlds, being unencumbered from a character’s personal narrative means that the narrator can provide commentary on the world, or move between characters and locations with the flick of a pen. You’ll see this approach in action in Reaper Man by Terry Pratchett, Howl's Moving Castle by Diana Wynne Jones, and The Chronicles of Narnia by C. S. Lewis.

Literary fiction. An all-encompassing perspective can allow authors to explore different character quirks, but also interpersonal dynamics between characters. Leo Tolstoy does this masterfully in his great classics Anna Karenina and War and Peace.

Now that we have established the basics of the major points of view, let’s dig a little deeper. If you’re ready for a closer look at POV, head over to the next post in this guide to learn more about first person perspective.

The Book Thief would be considered First Person POV, similar to Arthur Conan Doyle's Sherlock Holmes, right? Thank you for the wonderful information. It gave a lot of insight into choosing which POV would be most suitable for a particular story. Pretty clear-cut.

I sometimes have difficulty telling the difference between third person limited and omniscient. For example, in the quote from I am Legend, the sentence "If he had been more analytical, he might have calculated the approximate time of their arrival" sounds very omniscient to me, because Robert wasn't, and didn't. Is there an easy way to tell that this is limited rather than omniscient, or does it not really matter as long as it reads well?

This was a very helpful piece and I hope it's okay to share the link for reference.

It deal with the challenges associated with POV in writing. I like that it clearly distinguishes between third person limited POV and third person omniscient POV as most beginner writers are guilty of abrupt and inconsistent interchange in the two leading to head hopping. Greattach piece, I muse confess.