Third person limited is a point of view in which the narrator tells the story from one character’s perspective at a time, using the pronouns he, she, and they to describe their thoughts and actions.

In this part of our guide to literary points of view, we’ll break down what it means to write from a limited perspective, examining the benefits and potential pitfalls.

Why is third person limited such a popular (and powerful) viewpoint in writing? 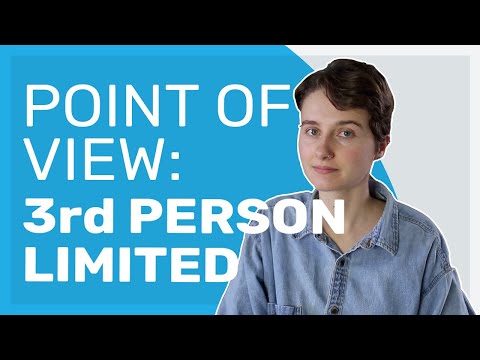 Third person limited has access to a character’s thoughts

Third person limited offers access to a character’s inner thoughts and emotions, much in the same way that first-person narration does. As a result, it creates a sense of narrative empathy, making it easier for readers to imagine themselves in the viewpoint character’s shoes — or as their confidante.

But Ender knew, even as he thought it, that Peter wouldn’t leave him alone. There was something in Peter’s eyes, when he was in his mad mood, and whenever Ender saw that look, that glint, he knew that the one thing Peter would not do was leave him alone. I’m practicing piano, Ender. Come turn the pages for me. Oh, is the monitor boy too busy to help his brother? Is he too smart? Got to go kill some buggers, astronaut?

Card gives a peek into our protagonist’s thoughts: from his deductions of another’s behavior (“But Ender knew [...] that Peter wouldn't leave him alone”) to Ender’s imagined harassment by Peter, we’re right there in our protagonist’s head.

When handled well, you could argue that third person limited is even more intimate than a first person narrative. Instead of a protagonist telling you their story, you are indirectly encouraged to experience the story as the protagonist does. A powerful trick of the trade!

👁️ The third person limited POV encourages reader to experience the story alongside the protagonist. Here is how.

Narrators are more reliable than in first person

In addition to creating empathy and intimacy between the reader and the viewpoint character, the third person limited perspective benefits from greater objectivity. First person narrators can have biases, limited self-awareness, or a reluctance to share crucial facts 一 making them unreliable at times. An external narrator, instead, can describe things more accurately, adding meaning and context to a character’s behavior (and development).

For example, in A Confederacy of Dunces by John Kennedy Toole, the narrator puts us in the head of his buffoonish protagonist — showing us what he’s thinking while also reminding us to take it all with a grain of salt:

A green hunting cap squeezed the top of the fleshy balloon of a head. The green earflaps, full of large ears and uncut hair and the fine bristles that grew in the ears themselves, stuck out on either side like turn signals indicating two directions at once. Full, pursed lips protruded beneath the bushy black moustache and, at their corners, sank into little folds filled with disapproval and potato chip crumbs. In the shadow under the green visor of the cap Ignatius J. Reilly’s supercilious blue and yellow eyes looked down upon the other people waiting under the clock at the D.H. Holmes department store, studying the crowd of people for signs of bad taste in dress. Several of the outfits, Ignatius noticed, were new enough and expensive enough to be properly considered offenses against taste and decency. Possession of anything new or expensive only reflected a person’s lack of theology and geometry; it could even cast doubts upon one’s soul.

Only a third person could inform the reader that, while Ignatius judges other people’s fashion as an ‘offense against taste’, he himself looks preposterous. Through the added context, we quickly learn about the contradictory nature of the character, something he wouldn't have told us if we were getting the story directly from him.

The ability to zoom out and portray characters through a ‘cinematic lens’ contributes to the popularity of this POV, but there are more perks to it, such as keeping the reader on the edge of their seat.

It maintains a level of uncertainty and surprise

In the mystery, suspense, and thriller genres, you’ll commonly see third person limited narration. Compared to other POVs, it’s a natural way to tell a story that has a lot of unknowns — things like revelations, and plot twists.

An omniscient narrator, by their very nature, knows who the killer is in a mystery but they must carefully omit details to keep the mystery alive. A limited third person narrator, on the other hand, only reveals what the viewpoint character knows, which allows the reader to uncover the mystery only as it occurs to the protagonist. If the focal character is surprised by a plot twist, the reader will be as well.

For example, in Agatha Christie’s classic Murder on the Orient Express, detective Hercules Poirot is on a train on his way back to London, when he is informed about… a murder:

The little man in the window shifted along the seat, and Poirot squeezed past: the other two men and sat down facing his friend.

The expression on M. Bouc’s face gave him, as he would have expressed it, furiously to think. It was clear that something out of the common had happened.

“What has occurred?” he asked.

“You may well ask that. First this snow-this stoppage. And now—”

He paused—and a sort of strangled gasp came from the Wagon Lit conductor.

“And now a passenger lies dead in his berth—stabbed.”

It’s the inciting incident that sets Poirot on a ‘journey’ to find out who’s the culprit. By having an up-close but limited access to his viewpoint, the reader will be able 一 as the story unfolds 一 to feel his confusion, frustration, and excitement in trying to solve the case.

However, despite its engaging qualities, this POV requires some craftsmanship to ensure that it doesn't slip through the cracks.

Writing with it requires discipline and focus

The most common pitfall with the third person limited POV is head-hopping, which is when the narrator reveals the thoughts or feelings of a non-focal character. In other words, they ‘hop’ between the heads of multiple protagonists, instead of sticking close to their focal character.

For example, imagine a scene where your POV character, Ciara, is speaking to a priest:

Ciara finally mustered up the courage to ask the big question. “Were you there when my sister died?” Father Walsh paused. Not wishing to upset the poor girl, he quickly concocted a version of the truth that Ciara could handle.

This would be a misuse of the third person limited, as there’s no way for your main character to know Father Walsh’s reluctance — unless she is a mind reader, in which case, all bets are off. You can, however, demonstrate Father Walsh’s reluctance by employing some classic show, don’t tell action. Your POV character can observe him avoiding eye contact, stopping and starting sentences, or fidgeting with his cuffs — all evasive gestures that suggest reluctance or deceit.

Head-hopping is not ideal when it happens with omniscient narrators — but positively disastrous with a limited POV. While modern editing programs will detect when you're shifting between passive and active tense, they won't be able to warn you when you've accidentally swapped your point of view character. In this case, the professional eye of an editor can surely help to revise your manuscript and keep your perspective consistent.

Pro tip: When writing in third person, try to avoid filtering, which occurs when you over-contextualize the actions of characters. F.e. the sentence “Eavesdropping, she realized they were talking about her.” could be more directly expressed as: “She eavesdropped. They were talking about her.” This keeps the character close and the narrative vivid.

What do Neil Gaiman, Isabel Allende and Joyce Carol Oates have in common?

They've all worked with Reedsy editors. Sign up today and work with them on your next book.

Let's take a look at a limited third person perspective, with another murder case...

The third person limited is a favorite POV of authors and readers alike, but fiction has a place for its omniscient counterpart too. If you're ready for a 'wider' viewpoint, head on to our next post on third person omniscient.