Third Person Point of View: The ‘He Said, She Said’ Narrative Style

Third person point of view is narrative style in which the narrator refers to all characters using the pronouns he, she, or they. An example of a sentence written in third person would be:

Writers can zero in on individual characters using third person limited, or zoom out and tell the story in third person omniscient, where the narrator is an all-knowing figure. Your POV choice will depend on what kind of story you want to tell, as you’ll discover in the next two posts in this series!

Here, however, we’ll simply cover everything you need to know about third person as a whole, and why writers might choose to use it over first or second person perspectives.

First and second person stories are great for their immediacy, placing the reader right in the action. However, can be restrictive if you want readers to see the bigger picture. Complex stories with a large primary cast often benefit from a narrator who can swiftly move between characters and locations instead of being tethered to your viewpoint character. An example would be George R.R. Martin’s Song of Ice and Fire series, an epic fantasy series sprawling in scope that features an entire chorus of POV characters.

With each chapter break, Martin shifts to a new viewpoint character (while staying in third person), allowing him to span vast gaps in the geography of his world and give insight into each character’s personality.

The morning had dawned clear and cold, with a crispness that hinted at the end of summer. They set forth at daybreak to see a man beheaded, twenty in all, and Bran rode among them, nervous with excitement. This was the first time he had been deemed old enough to go with his lord father and his brothers to see the king's justice fine. It was the ninth year of summer, and the seventh of Bran's life.

The man had been taken outside a small holdfast in the hills. Robb thought he was a wildling, his sword sworn to Mance Rayder, King-beyond-the-Wall. It made Bran's skill prickle to think of it.

Martin’s third person narrator has the flexibilty to play this scene through the eyes of a nervously excited seven-year-old while also revealing useful expositional details like the idea of a “King-beyond-the-Wall” and Westeros’s decade-long gaps between winters.

Of course, one could argue that it’s possible to write a sprawling novel written from multiple first-person perspectives. But having an enormous cast all narrating in first person can be confusing, and would put a lot of pressure on the writer to sustain multiple convincing character voices.

(Psst! For more help with characterization when dealing with a large chorus of characters, you can check out our free character profile resource below.)

While third person narration can allow the reader a great deal of intimacy with viewpoint characters, there are added benefits to staying out of your protagonist’s head.

It’s great for intrigue and suspense

One challenge of writing in first person is knowing how to toe the line between what your narrator knows and what they should reveal. Third person adds a little more distance, making it easier to flesh out main characters or move the story along without divulging information you wish to reveal later on.

This lends itself particularly well to thriller and mystery novels, where some holding back certain bits of exposition is essential to heightening the suspense. It can also be useful when writing any kind of novel that wants to deploy backstory or character history at a time when it can have maximum impact.

On the other hand, the third person isn’t just great for characters keeping secrets from the reader. An all-knowing narrator can also be useful for creating dramatic irony, revealing details that the characters don’t know themselves. For example, in the final act of Shakespeare’s Romeo and Juliet, Romeo discovers Juliet’s body. Unwilling to live in a world without the girl he has loved (for all of five days), he downs a vial of poison.

Thou desperate pilot, now at once run on

Thy drugs are quick. Thus with a kiss I die.

At this point, the audience knows that Juliet is not dead — but merely sedated in a ploy to escape her family. The gulf between what the audience or reader knows and what the character knows creates an almost unbearable tension, bringing the story to its climax as Juliet awakens to discover her beloved’s corpse beside her.

Of course, dramatic irony can also be deployed more light-heartedly — for example, in comedies of error where humor is driven by a character misinterpreting the world around them. And speaking of understanding the world…

Third person can help you build up your world

A first person narrator probably might not take the time to intricately describe something they’ve seen a thousand times. If you live in a world where society is ruled by a giant brain from outer space, you probably wouldn’t pause your story to arbitrarily explain the backstory of ‘President Lobularr the Cruel.' But a third person narrator will have no limits to what they might want to zero in on at any point in the story.

Though an all-seeing narrator gives writers the freedom to reveal setting and backstory in any way they see fit, don’t forget that one of the effective ways to draw readers into a setting is by showing how a character experiences that world. For example, in this passage from The Vanishing Half, author Brit Bennett describes a humid Louisiana rainstorm from the perspective of her protagonist, Desiree. 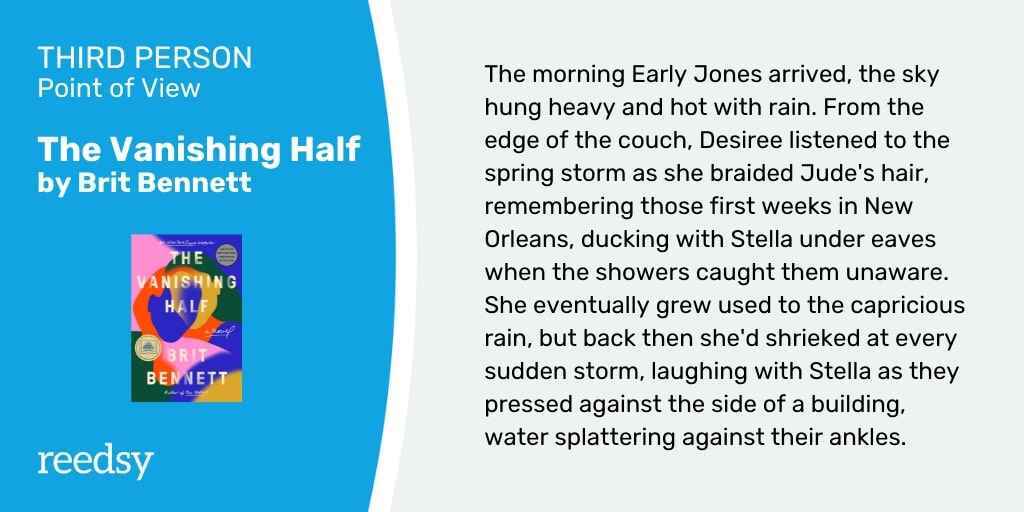 Instead of telling the reader that “it was a hot, rainy day,” this passage employs several “showing” devices, including strong verbs and sensory descriptions (“the sky hung heavy and hot,” “water splattering against their ankles”). Bennett evokes one of Desiree’s memories packed with specificity — the girls duck under “eaves” rather than just roofs, and the word “shrieked” conjures a very particular sound. The result practically drops the reader next to Desiree as she braids her daughter’s hair, half-lost in a ripple of nostalgia.

Written in third person, this passage is just as intimate and personal as it would have been were being narrated directly by Desiree, once again showing the versatility of this viewpoint.

Want to learn more about "show, don't tell"? You can check out our free 10-day course all about this golden rule of writing — it's useful for more than just third person narratives.

It’s a viewpoint that doesn’t distract from the narrative

In its enduring popularity, third person narratives have become the default mode of storytelling around the world, pre-dating even thelikes of Homer (the epic poet, not the animated nuclear engineer). As a result of its long and impressive history, this viewpoint has thebenefit of instant familiarity.

Starting a story in third person helps readers settle in right away, rather than asking them to adjust to the particular voice of a first-person narrator or the unusual directness of second person. Ever found a story’s first chapter hard to settle into? This may be because of an unconventional narrative style or unanswered questions about who is doing the talking distracting you. Third person narratives are relatively easy to get into the swing of.

While many writers are keen to develop an utterly unique way of writing, most of the time, readers aren’t looking for something particularly experimental or opaque. In that way, the third person can be a writer’s best friend — a straightforward, versatile, and easily digestible narrative perspective that has stood the test of time.