Part 2 – How to Start Creative Writing

Submit a short story based on 1 of 5 weekly prompts. Winners get $250.

Creative Writing 101: Everything You Need to Know

Creative writing is writing that takes an imaginative, embellished, or outside-the-box approach to its subject matter. This is in contrast to academic, technical, or news writing, which is typically dry and factual. Most people associate creative writing with fiction and poetry, but creative nonfiction should not be forgotten or underestimated, as it’s an important and wide-ranging kind of writing.

Creative Writing 101: Everything You Need to Know

We’ll be covering everything to do with creative writing in the rest of this series — but this post will focus on helping you understand and identify it. Many will say that they’ll know it when they see it, but there are some more forensic ways to decide whether something would be considered creative writing. Looking at its form, for example, is usually a strong indicator, but a focus on storytelling elements like narrative, perspective, and character can also suggest that something falls under the ‘creative’ umbrella.

Learn how to channel your creative writing into a shelf-ready book by taking our free course below.

What forms can creative writing take?

Given the fact that creative writing is often of an experimental and innovative nature, it’s no surprise that it takes a number of different forms. Let’s differentiate between the key manifestations of this kind of writing.

From haikus and sonnets to sestinas, elegies, and villanelles, poetry is one of the most multifaceted forms of creative writing. Writers of verse have the freedom to experiment with less rigid forms like prose poetry or free verse, but many poets also work within structured traditions that make specific demands in terms of rhyme, rhythm, and subject matter. Poetry, in case you were wondering, is the form that’s most likely to break punctuation rules or be formatted in unique ways, as in the case of blackout poetry.

The key thing to remember with poetry is that there are really no rules.

With literary magazines growing immensely popular in the 19th century, short stories entered the mainstream. While it’s widely accepted that short stories should run under 7,000 words, even shorter stories (classified as flash fiction and microfiction) emphasize the brevity of this narrative form even more, by telling stories in as few words as possible. All falling under the umbrella term of ‘short fiction,’ these types of stories are all about compressing and distilling narrative intensity. 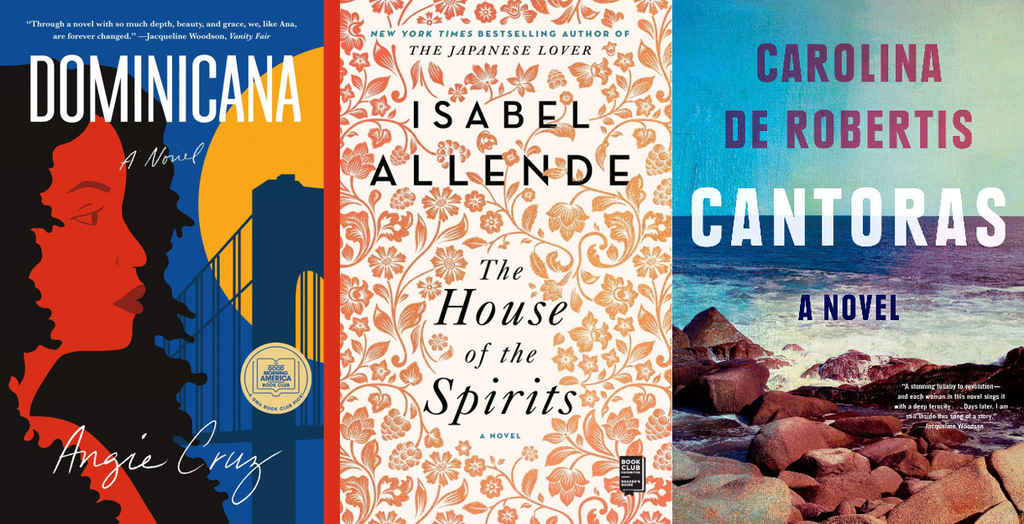 Perhaps the primary thing people associate with “creative writing”, the novel is an ever-popular form that relies on following a narrative arc using prose — and it also happens to have the most commercial power. Novellas and the even cuter-sounding novelettes are short and even shorter novels, the word count and narrative scope of which differentiate them from short stories. If you need an example of each, Angie Cruz’s Dominicana is a full-length novel, Edith Wharton’s Ethan Frome a novella, and John Steinbeck’s Of Mice and Men a novelette.

Consisting entirely of dialogue and stage directions, scriptwriting is a type of creative writing that relies heavily on subtext. In other words, everything that isn’t said by the characters, the gaps that emerge between the things they explicitly say. More than that, this type of writing isn’t intended for a readers but for other storytellers (directors, actors, designers, etc) to use and interpret in their own creative work. Famous examples include Angels in America by Tony Kushner and Fleabag by Phoebe Waller-Bridge.

Combining illustrations or visuals with text, these visual modes of storytelling also depend heavily on dialogue to build convincing characters, though unlike scripts, descriptive narration is not off-limits here. From superheroes like Batman to YA romance like Alice Oseman’s Heartstopper series, this category contains a huge variety of illustration styles and narratives.

💡Does this sound like something you’d like to try? Check out our guides to writing a graphic novel and making a comic book, and give it a go!

Thoughtful, reflective pieces of writing that often follow a narrative arc, personal essays explore a person’s thoughts and feelings on a personal matter. Rather than simply chronicling the writer’s experiences, these essays typically use an artifact, book, or news development as a jumping off point from which to widen the scope of their story. These essays can also include travel and food writing, as well as think pieces that rely heavily on a personal perspective.

📚 Check out our list of creative writing examples for some of our favorite personal essays.

Aside from casually existing within other types of creative writing, humor can also be considered as its own type of creative writing type. Much alike to online meme-making or old-school political cartoons in spirit, humor writing satirizes and lampoons to make the reader think differently about political structures, current events, and human behavior, with its primary goal being laughter. These days, this kind of writing tends to congregate in humor websites or the humor sections of popular magazines like The New Yorker’s ‘Daily Humor’

How do you know it’s creative writing?

Five fundamental elements are the clearest way to distinguish between well-written non-creative writing and creative writing. You can write about the same subject matter in a different way, but creative writers will use poetic license and storytelling tools to bring a story to life. 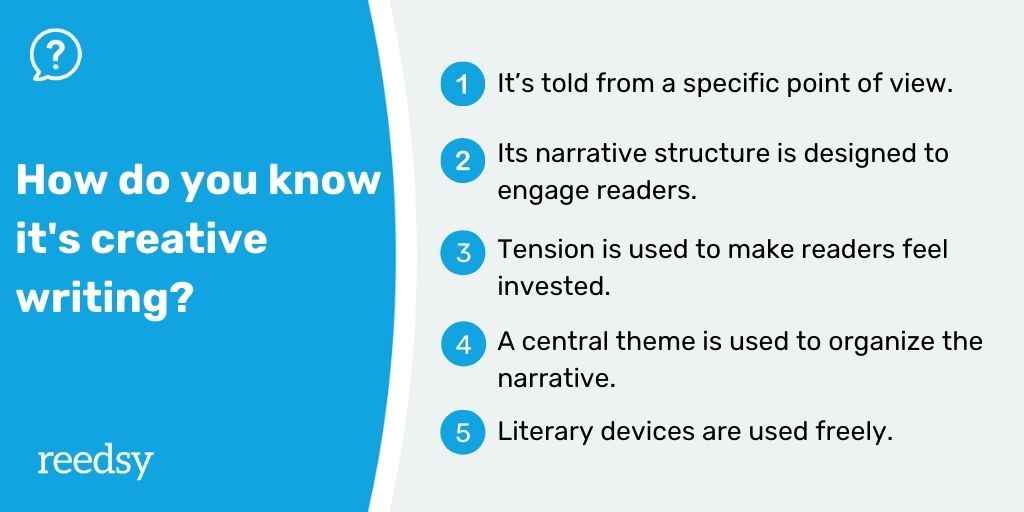 1. It’s told from a specific point of view

Point of view humanizes a narrative by offering personal insights and perspectives. Unlike news reporting, which aims to be impartial and objective, creative writing leans into the fact that each writer has a unique personality, and uses this to its advantage. From using first person and owning your ‘I’ to express your feelings or experiences, to dramatizing the gaps of communication between characters in a fictional piece, contrasting viewpoints make a work ever more immersive, vivid, and inherently interesting to read. 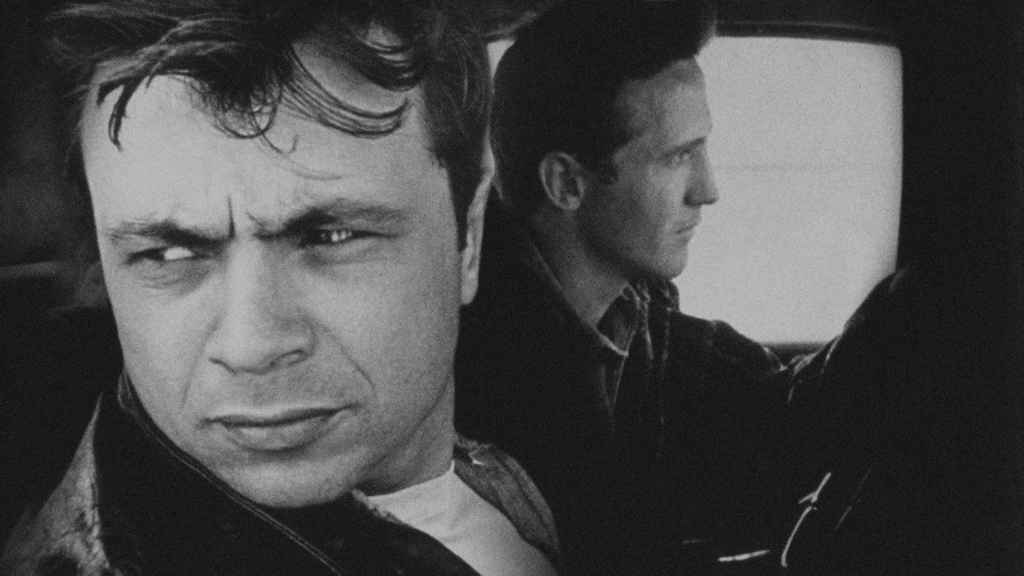 Need an example? Take Truman Capote’s In Cold Blood and contrast it with news accounts of the same murder. Capote’s book gives the reader a closer perspective of the killers, making an effort to understand them, whereas news reports simply list the facts in chronological order.

2. Its narrative structure is designed to engage readers

Fiction and nonfiction share an important unifying core: that of narrative structure. Both use the principles of storytelling to express events, realizations, or complicated plots and subplots. Regardless of what happens in each narrative, the opening, ending, and rising action sections of a piece of writing need to be tightly structured for cohesion and coherence.

A personal essay that does this well is Lilly Dancyger’s essay “Don’t Use My Family For Your True Crime Stories''. Instead of a chronological retelling of her cousin’s murder and her own subsequent grief and aversion to true crime writing, Dancyger opens by introducing the fact of the murder, then briefly visits the present to explain her current feelings, before returning to the past to narrate how she and her family heard of Sabina’s murder. This structure allows the reader to empathize by mirroring the shock of death: being taken by surprise is followed by a need for facts and explanations.

Whether the tension arises from an impending realization or comes in the form of suspense as the perpetrator of a crime is about to be revealed, the existence of tension means that a writer has managed to write something where the stakes are high, and the reader feels emotionally or intellectually invested. The Serial podcast, for example, does this particularly well, as it tells a true story in a serialized form with cliffhangers and a central mystery.

4. A central theme is used to organize the narrative 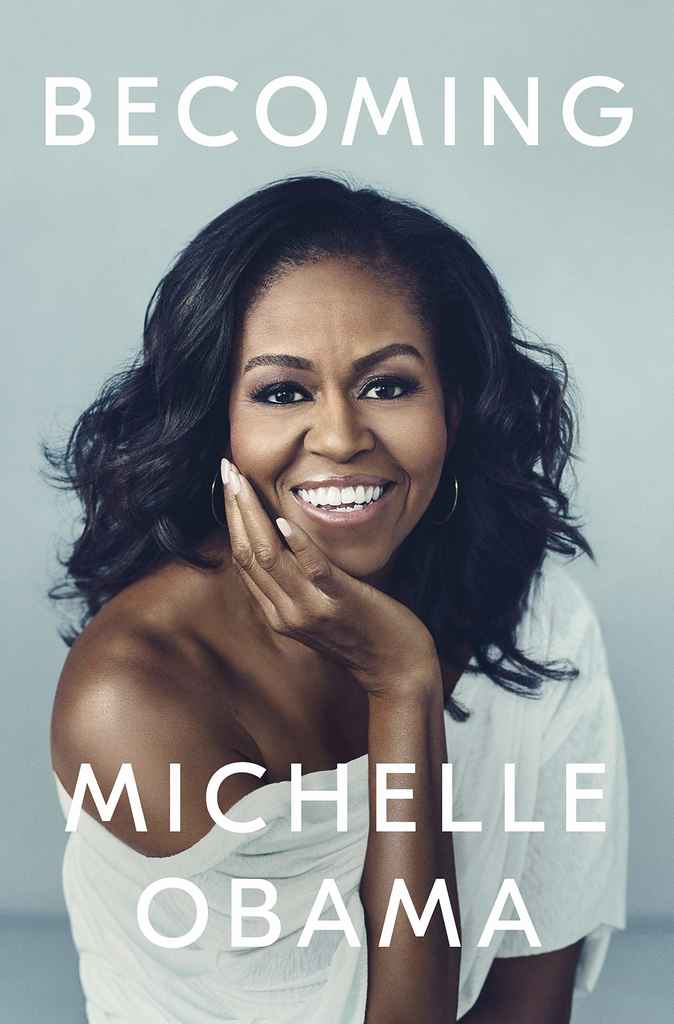 Life, it must be said, is not quite as neat as literary theme analysis will have you think. Writing, however, tends to operate as an opportunity for thoughts, feelings, and events to be organized into information the reader can process. Because of this process of organizing thought, certain central themes appear in each work. In a memoir, for example, that might be the lessons someone has learned, or the principle they believe best represents their experiences. To give you an example, Michelle Obama’s aptly named Becoming keeps returning to the same conclusion after reviewing each of her experiences: that you, too, can become whatever you want, despite adversity. In this case, the story’s recurring themes are hope, growth, and perseverance in the face of discouragement. Unlike the dry Wikipedia page giving Michelle Obama’s biography, Becoming is a compelling piece of creative writing that tells a cohesive story by focusing on this central theme.

Imagine reading the newspaper and encountering a report of an accident that begins with this sentence:

“The sun had just begun to awaken, emerging sleepily from the shadowy depths behind the skyscrapers and casting a pale yellow light onto the street when Yamada Kumiko had a terrible accident.”

That’s a tad too poetic for a newspaper article, isn’t it? Aside from being tragically insensitive given the accident context, the reason this sentence feels so wrong is that it uses figurative language in a way that is not common for factual journalism. That’s because literary devices (and some rhetorical devices, too) are generally reserved for work considered to be creative writing, instead. Otherwise, it might feel a little bit like the writer is showing off in the wrong context — if your washing machine troubleshooting guide is all ornate turns of prose, something’s gone wrong (and your machine is likely to stay broken).

We hope this guide has armed you with the questions you need to ask if you’re ever unsure about whether something is considered to be ‘creative writing’ — why not turn your attention to trying creative writing yourself next? May your writing flow not like a faucet, but a waterfall: abundant, uninhibited, and breathtaking to all who behold it.

In the next post in this series, we'll be taking a look at 7 ways in which you can start creative writing yourself. Time to have some fun!

Submit a short story based on 1 of 5 weekly prompts. Winners get $250.