Second Person Point of View: Should Anyone Use It?

When writing from the second person point of view, authors directly address the reader by using the pronoun ‘you’ — usually to transform the reader into a character, and draw them closer to the story. However, if ever there was a rule that most editors agree on, it’s this: don’t write a novel with a second person narrative.

In fact, that’s exactly the feedback Jay McInerney received when drafting Bright Lights, Big City. Written entirely in second person, this 1984 debut novel took the literary world by storm. But in the three decades since, its signature feat has rarely been replicated: indeed, it’s often cited as the exception that proves the rule  — it’s been done already, so don’t bother, okay?

Well, not so fast. In this post, Reedsy's experienced editors will be looking at some good reasons to consider the second person point of view — as well as dissecting why it's usually best to avoid. 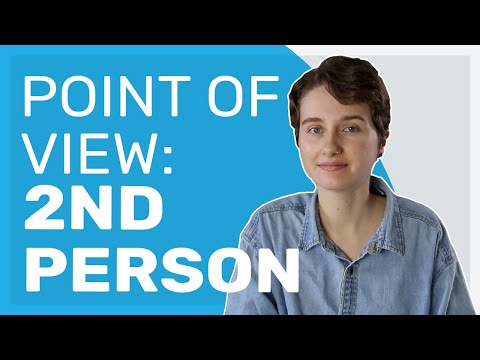 If you want to determine which POV is right for you and your specific story, we recommend taking this quick 1-minute quiz below.

Despite the naysayers, several authors have dared to write a novel, chapter, or short story from the second person point of view. So what might they be trying to achieve? And why might you consider taking the risk yourself?

Here are 4 *actually* good reasons for writing from a second person POV.

1. To bring the reader closer to the story

“Well, second person is a cut closer than first person because readers actually are the character,” says Joel Bahr, a developmental editor at Amazon Publishing. “Even the minimal distance created between reader and character created by the phrase, “I thought" is refined further in second person. In this closer POV, there is no "I thought," but rather this is how you (we, really) think.”

In the example of Bright Lights, Big City, a level of immediacy and intimacy quickly emerges as the reader is thrust into the role of a serial cheater.

“There is no level of interpretation or justification. Consider if McInerney instead opted for first person, and we had: ‘I'm not the kind of guy who would do this, but I'm at a club…’

“In this instance, first person is inviting the reader to believe what they're telling them. Second person takes the ‘ask’ off the table. There is no debate about what kind of person you are or if these actions happened. You are, and they did, and we know that because there is no functional difference between the reader and the character.”

As Bahr hints, the second person narrator can bypass the ‘unreliability’ of first person narrators. When characters tell their own tales, we often wonder how the truth of the story might be filtered — either by their selective reporting or lack of 20-20 introspection. With a second person narrator, readers are told what to feel, think, and see — and they usually have no reason to doubt it.

A more recent example is N.K. Jemisin’s Hugo-winning The Fifth Season. Set on a dying world, the story is told from the viewpoints of three women, one of which is written from the second person point of view. 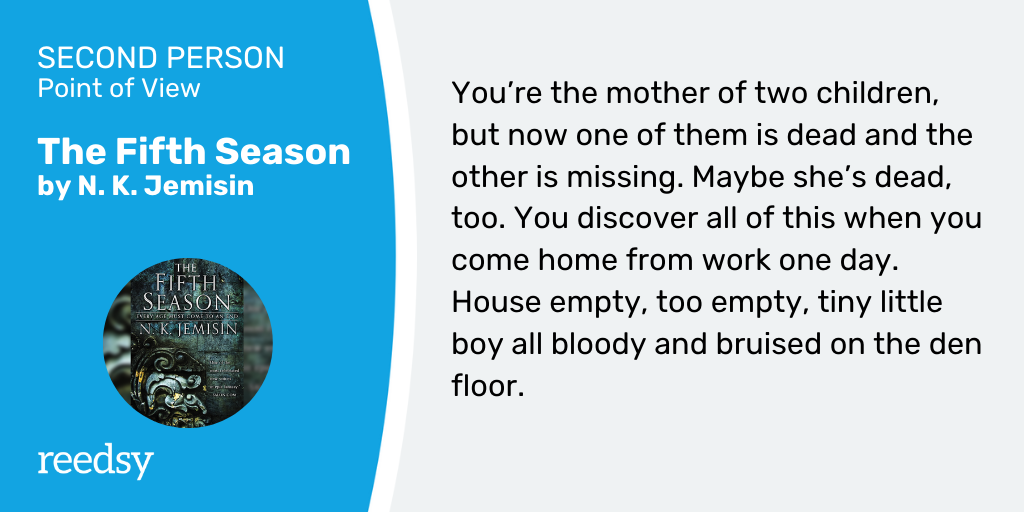 Reedsy editor Tricia Callahan worked on Jemisin’s book as a proofreader and sees it as a prime example of how this form can benefit a story.

“The second person POV brings the reader closer to the narrator, making the reading experience more intimate and less detached. When the narrator turns the reader into one of the characters, the story feels immediate and surrounding.”

Greater intimacy, however, is not the only result of this viewpoint.

What does second person POV really involve? Reedsy's editors give you the lowdown.

2. To distance the narrator from their own experience

We’ve looked at how second person narration can bring readers closer to the story. But sometimes, it’s used to create a greater sense of distance between the true narrator and the story they’re telling — as editor Matthew Sharpe suggests is the case with Bright Lights, Big City.

“It's almost as if the narrator's conscience is writing the novel, and there's a bit of self-accusation there, like, ‘You screwed this up, then you screwed up this other thing,’ and so on.“

Similarly, you can see this level of detachment in Lorrie Moore’s Self-Help. “How to Be an Other Woman,” tells the story of a woman who has started an affair with a married man. 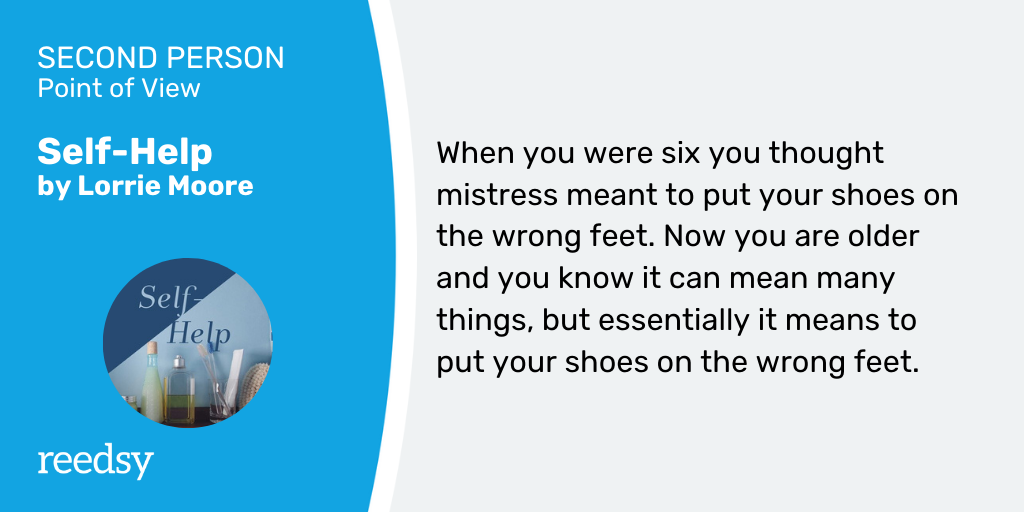 The protagonist is not meant to be you, the reader, or Moore, the writer. Rather, it’s a woman named Charlene — who also happens to be the narrator. The second person point of view serves to distance Charlene from the story she’s telling: we know she’s actually referring to herself, so we understand that her use of the displaced second person, rather than direct first person, is symptomatic of how hard it is for her to talk about what she's done.

3. To give the narrator someone to address

Now we’re entering a gray area. Some novels directly address the reader as a character — but they are not strictly written in the second person. Books that fall into this category include those that take the form of letters written by one character to another. These include works like Bram Stoker’s Dracula, Alice Walker’s The Color Purple, and Jay Asher’s Thirteen Reasons Why.

The effect of reading epistolary narrative is often a sense of voyeurism —  we feel as though we’re peering into the lives of others. The intention, in most cases, is to bring us closer to the characters, creating an almost conspiratorial relationship between narrator and reader.

This communication may not necessarily be in the form of letters, but rather speech. Mohsin Hamid’s The Reluctant Fundamentalist blurs the lines between first and second person in this way: the protagonist, a Pakistani man on the streets of Lahore, speaks to an American stranger — you, the reader. As the book progresses, we are given clues as to who ‘we’ are in the book and what role we might play in the story. 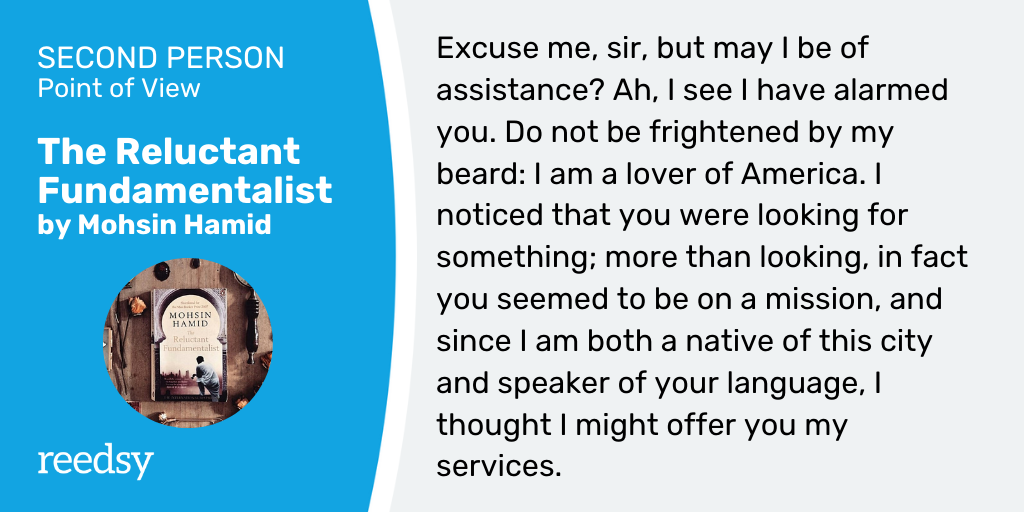 Unlike a straightforward first person viewpoint, this type of narrator may have some agenda with ‘us’ — something they want to convince us of or an attitude towards us. Cast in the story, we feel more involved in the discourse.

4. To reinforce the ideas that drive the story

Here’s a piece of advice from editor Kate Angelella: “If an author wanted to try writing in second person POV, I would encourage them to do so — so long as it's a purposeful choice. Is there a reason why this POV works best for your story, other than style and a desire to be literary with a capital L?”

Iain Banks’ Complicity contains two viewpoint characters: a journalist and a murderer, whose killings have been inspired by the journalist's writing. The chapters told from the murderer’s POV are in the second person. 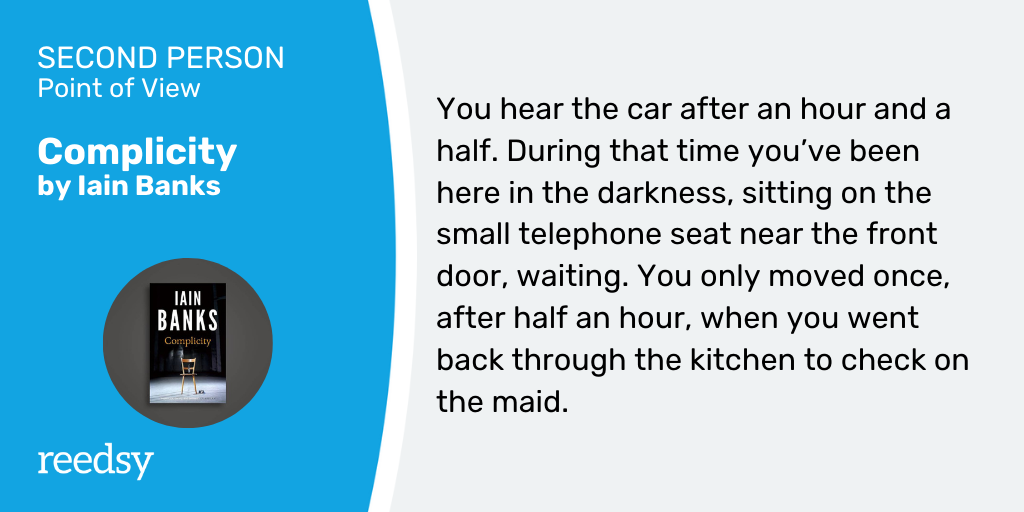 Author and editor Tim Major points out that this choice of POV ties with the novel’s primary theme (which is spelled out in the title). “The second person perspective makes the reader complicit in the murders, experiencing them as if he or she is carrying them out, and therefore the reader is involved in a very unusual manner.”

This uncomfortable intimacy in the ‘killer’ chapters brings the reader into the headspace of the journalist — who himself is dealing with this acute sense of complicity.

So, there are a few of the major reasons you might want to consider writing in the second person. But now we’ve seen the effects of second person point of view, let's address the elephant in the room.

Why you probably shouldn’t do it

In the opinion of almost every editor we spoke with, writing a novel in the second person is a bad idea 99.9% of the time. Here are some of the reasons they give.

It can be a lot to ask of your reader

“In second person, I think it's crucial to consider what spaces you're asking the reader to occupy intimately, and how you're going to get them to suspend their disbelief. Sometimes, it's actually an increased distance between the character and the reader that can cultivate the empathy you need.”

It may hurt your chances of finding representation

“It is becoming increasingly difficult to secure a literary agent and get a publishing deal if you are a new author. If that is your dream, don’t create any extra barriers for yourself that might put industry professionals off publishing your novel.”

It works better in short stories than in novels

“An entire novel told through second person can become wearying, especially when the protagonist of the story is unpleasant, as is the case in Bright Lights, Big City. For this reason, you may find that a second person narrative works better for short fiction.”

All that said, remember that this is your book. Maybe you intend to self-publish, or you don't mind limiting your potential audience, and are therefore less beholden to commercial expectations. Maybe your story just can't be told in any other way. If that describes your experience, then, by all means, ignore the naysayers. Take a deep breath, and dive into writing from the second person point of view.

If, on the other hand, the potential rewards don’t outweigh the risks, head back to our post on first person POV, or go on to the next post to learn more about writing in third person.

Really? The very fact that this article encourages writers NOT to use the second person viewpoint gives me even more reason to do it. The argument "it's already been done, so don't bother" is the most discouraging thing anyone could ever say to an artist. It's like saying there are plenty of books out there, so don't bother writing another one. Where would we be if every writer followed this dictum? The fact that second person is so rarely used is even more reason to explore it. Self-insert or second person POV stories have a dedicated following in some online communities, specifically fan fiction. What if writers were to expand upon what makes this such a popular choice in these circles and bring it to a broader literary community? I think there is so much potential for exploring second person POV, and feel a little bitter that this article leans so strongly towards discouraging this viewpoint. Please, don't give artists who already have a hard time creating and gaining recognition for their work yet another reason to doubt themselves!

Second person has worked really well for me in flash fiction. Really, the whole article seems a bit discouraging.

Another example of second person viewpoint that I often see mentioned is in choose-your-own-adventure books - a different style of book, certainly, but still a work of fiction...