Part 1 – What is a Haiku? Japan’s Beloved Poetry Format, Explained Polish up your verse

Sign up to meet professional poetry editors on Reedsy.

How to Write a Haiku: 6 Key Steps to Follow

If you stumbled upon haiku poetry, chances are you appreciated its minimalist nature. However, the simplicity of haiku can be deceiving: the art of encapsulating a feeling into a few words is hard to master, but ultimately a fascinating and rewarding pursuit.

If you’re wondering how to write a haiku, here are 6 steps you can follow: 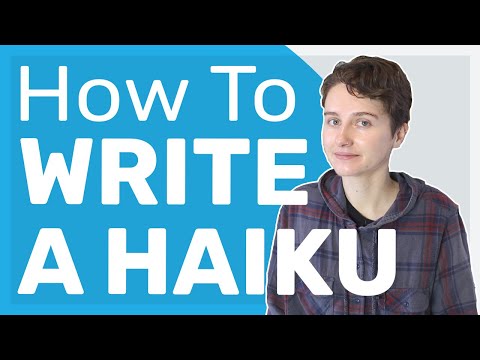 To begin with, get familiar with haiku poetry by reading some of the classics. This will help you to get a feeling for what a haiku sounds and feels like. You will find that some poems speak to you more clearly, while the meanings of others may seem more obscure.

Whether your end goal is to publish a poetry book or simply express your creativity, your process will begin in the same way — getting acquainted with the form. Head to a library or a bookstore, or browse on Amazon to get your hands on a few haiku anthology books featuring the work of different authors.

Ideally, you’ll want to read works from both the Japanese tradition and the modern era. You can start with the four classical haiku masters:

Which 20-second poem should you recite while washing your hands?

Discover the perfect poem for you. Takes 30 seconds!

You can find plenty of haiku examples online, but seek out trustworthy websites (i.e. The Haiku Foundation) to ensure they’re correctly translated and attributed.

Once you’ve got the gist of it, decide if you want to play by the traditional or modern rules.

2. Learn the rules of the form

For being such a simple and minimal poetry form, the haiku format has a long history of traditions and rules. As with all artforms, its rules are made to be broken — but in order to do that, you need to know them in the first place.

Japanese poets used to write haiku as one-liners containing 17 on (a term that roughly translates to ‘syllables’). In the English-speaking world, they are usually written in three lines, with a short-long-short structure of 5-7-5 syllables per line.

In modern haiku, however, syllable count isn’t strictly adhered to. As Mildred Rose smartly put it:

Some contemporary poets write haiku in one, two, and even four lines 一 so feel free to experiment and find your own layout, as long as it resembles the original concept.

Here are a few examples of haiku with varied structures:

a spider, how lonely I feel

in the cold of night!

Haiku has very few grammatical rules, so don’t worry about breaking any. The most commonly used punctuation device, in the modern format, is the em dash (—) as a way to break the poem in two different parts, putting them in contrast with one another.

Here is an example:

I didn't know the names

my garden is gone.

As you can see, Ginsberg uses the em dash to create a “before and after” effect, and to express a feeling of regret about not paying more attention to the flowers — whether in a literal or figurative sense.

Traditional haiku is commonly inspired by nature and contains seasonal references. However, feel free to write about any theme that captures your interest, such as love, friendship, or other aspects of daily life. Whether you want to write a poem about your cat, your travel adventures, or the stranger next door is totally up to you.

To sum it up, you have complete freedom to follow the rules or experiment with the form. It might be easier to start with a looser structure to get more familiar with the craft, and then consider if you want to adhere to more rigorous standards.

The next step to actually writing a haiku is getting in the right mindset for it.

3. Focus your senses and remain present

The art of writing a haiku requires a sensitivity to the external world and our emotional reactions to it; to be able to look at the ordinary world in front of us and see it with new eyes. As author Edward Levinson points out, at the heart of a haiku poem there is an “aha moment” 一 a newfound clarity about the nature of things, as if some greater truth has become apparent. The moment could lead to an insight or simply a distinct feeling.

the mirror I stare into

In the first poem, the writer expresses a sudden awareness about aging after closely looking at his face in the mirror, on an Autumn morning. In the second poem, watching her husband paint a fence leads the author to reflect on her second marriage, which probably resembles the first one too closely. In the third one, Robinson 一 observing a sparrow 一 resonates with the longing for a cozy and warm shelter as winter approaches.

At the heart of a haiku poem there is an “aha moment” — a sudden awareness about the nature of things. Learn how to write one yourself!

To notice these types of subtleties, a calm, observing mind is the most important tool at your disposal. Being surrounded by nature might do the trick, just as it did for Matsuo Bashō in the countryside of Japan, and many other poets after him. Depending on where you live, you may find the right peace of mind nearby lakes, rivers, mountains, forests, oceans, beaches, or other natural habitats.

If you’re a city dweller, you may find the same focus while taking a walk in the park or sitting on a bench. Ultimately, it doesn’t matter where you are physically, as long as you are receptive.

Once you feel present and observant enough, start to write down what captures your attention.

Haiku are built upon images, painted with language, that allow the reader to have a similar sensory and emotional experience to the one the poet lived. In other words, a good haiku lets the audience see, hear, smell, touch, and taste “with” the author 一 as well as feel what they feel.

Here is a great example:

in the steaming cocoa

The image of the marshmallow melting into the steaming chocolate is striking: a warm feeling that is juxtaposed with the rainy (and likely cold) evening. In an instant, we can “be there” with the author.

So, how do you go about finding your key images? When you observe life happening around you, simply write down what catches your attention.

If you’re in nature, you may notice the shapes created by a flock of birds, or the fading color of leaves in Autumn. In the city, it may be the sound of shoes squeaking on a basketball court, or the look in the eyes of an old man passing by on the sidewalk.

Whatever catches your attention, write it down. At this stage of the process, don’t stress too much about syllables or structure 一 you will edit your poem later.

This process might take a while, as you’re unlikely to find deep wells of meaning in every image you encounter. But when you do spot something that could potentially spark an “aha moment”, ask yourself these questions:

This exercise will help you to pin down the exact feeling you want to express. Now that you’ve gathered your main images, it’s time to frame them together.

5. Create context and connect your images

To frame your haiku on paper, you can tinker with two elements: the relationship between the images and the context in which they happen.

As Jim Kacian suggests in his book How to Haiku, to provide the context you can either make a seasonal reference or use other keywords. For the former, you could mention the frost on the leaves to describe winter or a warm evening breeze for summer. For non-seasonal haiku, you could start with keywords like “funeral:” or “Easter evening一” to contextualize the setting.

Think back at your haiku moment: where did it take place? At what time of the day? Of what season? What was the event?

Select the detail that better helps the reader to relive the scene with you.

The next step is to create a relationship between your key images. Think of them as a matchstick and a striking surface that, when rubbed together, create a spark 一 fueling the entire poem. The more vivid the images and the more striking their connection, the stronger the impact on the reader.

Let’s see a couple of examples:

sinking into the rocks

The opening word, stillness, sets the tone of the scene. This is reinforced by an image of rocks in which a cicada's voice suddenly appears and disappears. In just a few words the poet depicts the tension between silence and noise, tranquility and chaos 一 perhaps suggesting that life emerges from nothing and quickly returns to it.

The first line both establishes the context of the poem — suggesting that the author may be walking in a forest or a park — and provides the first image: the bare and leafless trees, which are juxtaposed to the poet’s mind, crowded with thoughts. The contrast makes him aware of his excessive mental activity and, perhaps, his inability to stop it 一 a feeling other people can relate to.

Tinker with your images for a while, playing with context and contrast, and figure out how to best link them together. Once you have found a good framework, you can polish up the poem.

First off, refine your haiku’s layout; revisit your research from earlier, and decide what syllable structure you want to follow, if any. Then decide if and when you want to use punctuation marks, like em dashes or semicolons, to enhance the reading experience and the association between images. (Try re-reading Bashō’s poem about stillness without the colon to appreciate how critical it is!)

It’s a good practice to read your poem aloud, trying to get a sense of its rhythm and making sure it sounds natural. If there is a word that doesn't “feel right”, browse through the thesaurus for another one. With such an economy of words, it’s important to find the right vocabulary. With time and practice, it will come to you more easily.

Finally, just like with any other piece of writing, go for a (haiku-less) walk. Getting some distance from the poem will help to “let it rest” in your mind and return to it with fresh eyes. You can also ask for a second opinion from a friend, or if you're thinking of publishing a collection of haiku, consider hiring a poetry copy editor to refine them to perfection.

Despite its simplicity, it takes time and practice to write great haiku. With the help of these tips and ideas, you’re ready to look at the world more closely, capture those ordinary yet meaningful moments of life, and share them with the world. So go out there, and find your haiku moments!

Polish up your verse

Sign up to meet professional poetry editors on Reedsy.