Part 2 – How to Write Flash Fiction 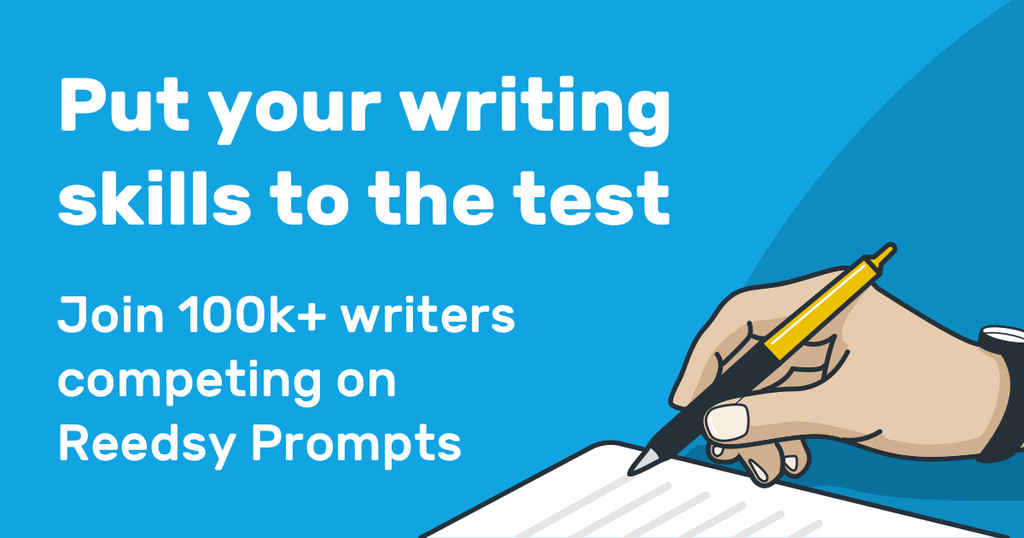 Submit your stories to our weekly short story contest.

Flash fiction is a type of prose narrative that takes the form of very brief, self-contained stories. Its word count ranges from 5 to 1,000 words on average, and tops out at 1,500. Also called a short short, micro-story, or nanotale, a work of flash fiction isn’t just a pared-back short story. The form is unique in that, rather than focusing on plot or character development, it focuses on movement: each sentence (or even word) peels back a layer and progresses the story.

Whether they were written by Ernest Hemingway, Arthur C. Clarke, or The Spokane Press — it doesn’t really matter. What’s important is that they’re a premier example of everything fiction’s shortest form can do. In flash fiction — where twist endings and enigmatic last lines are standard practice — just six words can allude to the tragic death of a child.

Flash fiction has fewer than 1,500 words

With roots in collections like Grimms' Fairy Tales and Aesop's Fables, (very) short stories have been around for centuries. They fell out of fashion for a while, but have recently made a huge comeback — not entirely surprising for a generation that tweets 280-character 'stories' all the time.

Depending on who you ask, there are currently around five different subcategories of flash fiction:

But outside of vague word count parameters, it’s a difficult genre to categorize. As renowned flash fictionist Michael Martone puts it:

So instead, let’s focus on what makes it so great.

Struggling to visualize these numbers? Download our cheatsheet below for a quick and easy reference! 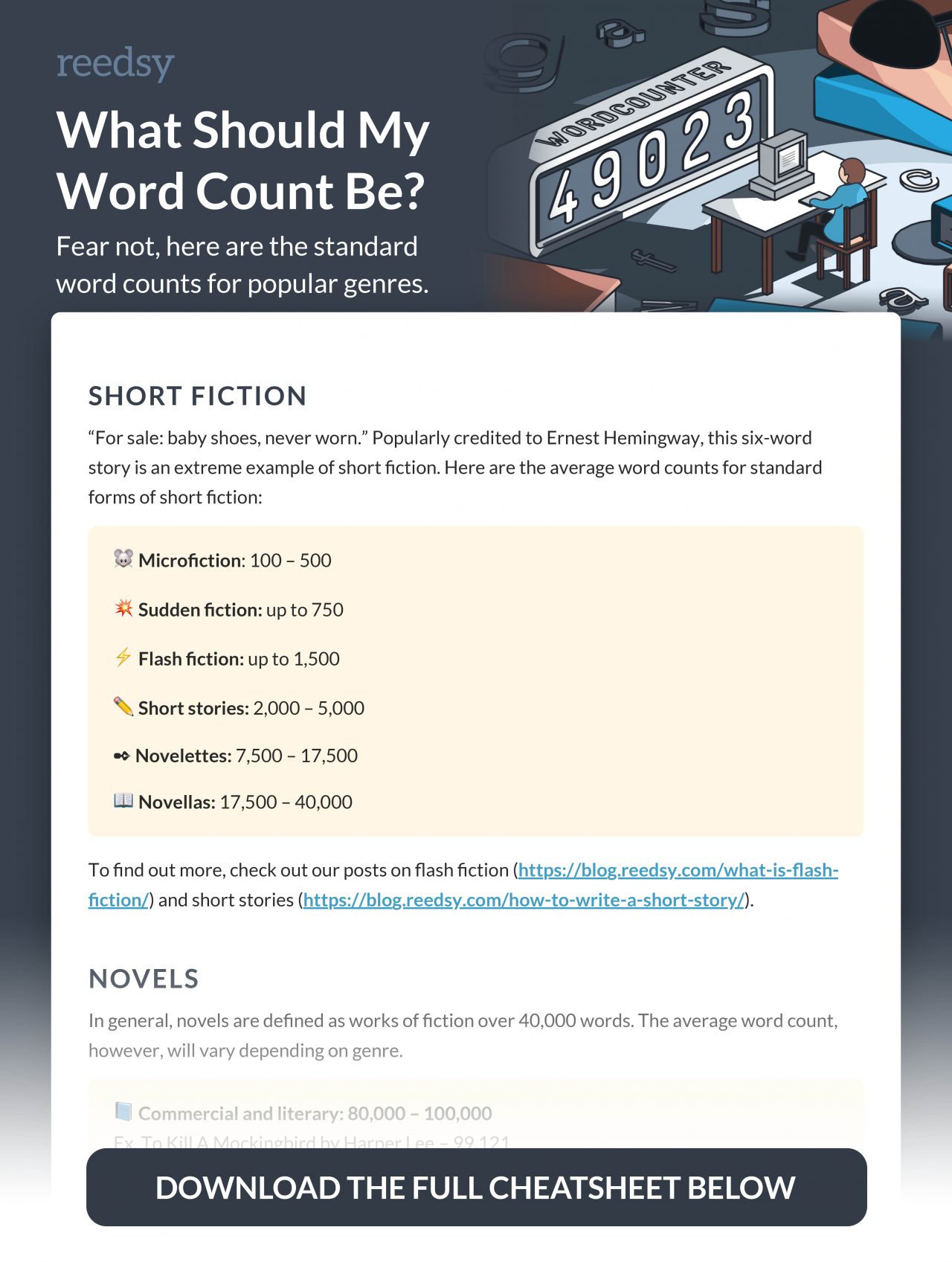 We'll send it to your inbox right away.

Every sentence works harder than the last

If we’re right to attribute it to him, “For sale: baby shoes, never worn” is far from Hemingway’s only foray into flash fiction. He was a prolific practitioner of the form — and a good one, too. So let’s look at an example of his work to see what makes short shorts so engaging.

"Chapter V", a vignette from Hemingway’s collection In Our Time, follows the typical arc of great flash fiction: starting with a straightforward but violent hook that summarizes the plot, it reveals more and more with each subsequent sentence.

“They shot the six cabinet ministers at half-past six in the morning against the wall of a hospital. There were pools of water in the courtyard. There were wet dead leaves on the paving of the courtyard. It rained hard. All the shutters of the hospital were nailed shut. One of the ministers was sick with typhoid. Two soldiers carried him downstairs and out into the rain. They tried to hold him up against the wall but he sat down in a puddle of water. The other five stood very quietly against the wall. Finally the officer told the soldiers it was no good trying to make him stand up. When they fired the first volley he was sitting down in the water with his head on his knees.”

After a matter-of-fact opening, Hemingway immerses the reader in the moment with evocative and sensory language. Then, at the midpoint, he adds a new detail that completely changes our understanding of the story: “One of the ministers was sick with typhoid.” The simple, straightforward sentences that follow don’t waste words or move in circles — each builds on the last and moves the story forward with momentum and intent.

The last line brings new meaning to the first: the execution of six bureaucrats becomes the execution of a sick, dying man. What began as an impersonal report, ends as a vivid portrait of human suffering — with us right in the room. Hemingway gives us just enough to empathize with the bureaucrat and even make us feel complicit for having so casually witnessed this.

Since no sentence can go to waste, good flash fiction pieces move forwards with tremendous momentum, and make hairpin turns at breakneck speed. Not every short will be as gut-wrenching as that piece from Hemingway — but since the form carries drama and unexpected twists so well, many of the best ones are!

As a creative exercise, they're practically perfect

Micro-stories aren’t just great for readers who are short on time (or attention). They’re also a great way for writers to experiment in a low-stakes environment. Challenging you to spotlight a smaller story while hinting at a larger one, flash fiction teaches you to squeeze more out of every word.

What’s more, while writing flash fiction isn’t necessarily easy, it certainly isn’t as time-consuming as writing a novel. If you can write short shorts regularly — perhaps between bouts of writer’s block — you can share them quickly and build a fanbase that will yield dividends come publication time. But all of that isn’t to say that flash fiction is just a means to an end....

Don't let your busy schedule stop you from becoming a writer. Learn how to build an unbreakable writing habit. Get started now.

Magazines and contests actively seek them out

Flash fiction is an art form with buckets of potential in and of itself. And if you decide that flash fiction is the form for you, there are plenty of publications looking to publish and celebrate small but mighty stories. (Some offer payments, too!) Here are six to get you started:

Where to publish your flash fiction... other than in your Twitter feed #amwriting

You can search for more opportunities using our directory of literary magazines, or by filtering for flash fiction in our writing contests directory. Searching for “litmag” on Twitter should also yield a bunch of results. But don’t forget that micro-stories are very easy to publish yourself! Because they’re so short, a prolific author can release them in a continuous stream through social media accounts or via a blog or email list.

Want the best of both worlds? Some flash fiction will be long enough to submit to Reedsy’s active writing community. Every week we put out five creative writing prompts that you can respond to with a story between 1,000 and 3,000 words short. Choose to submit it to the contest for a chance at winning $250, or just share it with your fellow writers for feedback and support.

When you're ready, be sure to check out the next post in this guide to learn how to write a micro-masterpiece.

It's odd to me that you list only literary magazines, rather than including genre magazines, many of which are happy to take well-written flash fiction. Daily Science Fiction, for example, pays competitive rates and only publishes shorter fiction. It's a shame to limit writers' exposure to publishing opportunities due to an emphasis on "literary," often non-paying markets.

If life is a movie, then you are the best part.

that is sooo cool and inspiring

Like Flash Fiction...which I may have read and said "hello" to in passing, it is a form I find fascinating and foreign to me. I compare it to Chinese food, Immediately satisfying... but always leaves me hungry for more. Thanks for your concise and conversational explanation of this tiny cousin to the novel. The petit four to the main course... a tasty article. Fitz

wow... your writing does feel warm... like a phone call to a long-time sibling.

Submit your stories to our weekly short story contest.