Double your revenue this year

On Reedsy, you set your own rates and connect with over 500,000 authors looking for help to publish their books.

Editor Salary: How Much Do Editors Make?

A desk piled high with manuscripts, brushing shoulders with authors at glitzy book launches, getting a first glance at the freshest fiction around — working as a book editor is a pretty dreamy prospect for lots of people. But how much do editors make? In this article, we'll look at the range that editor salaries fall into, and what factors contribute to it.

A middleweight editor in a traditional publishing house will earn approximately $55,491 according to indeed.com — a figure that is based on the aggregation of 802 salaries (as of March 2021). Meanwhile, The Bureau of Labor Statistics puts the number for editor salary at $63,400 per year (roughly $30.48 per hour).

These median salaries are constitutive of the wage a person could earn if they’ve been working in the industry for a number of years. It’s worth remembering that starting salaries in many publishing houses (even the most prestigious ones) are notoriously low, as many will gladly accept a salary that barely exceeds the minimum wage to work in a desirable industry. Note also that many editorial professionals start with unpaid internships.

That being said, editor salaries are certainly nothing to scoff at, considering they come in around the average wage of a US worker. 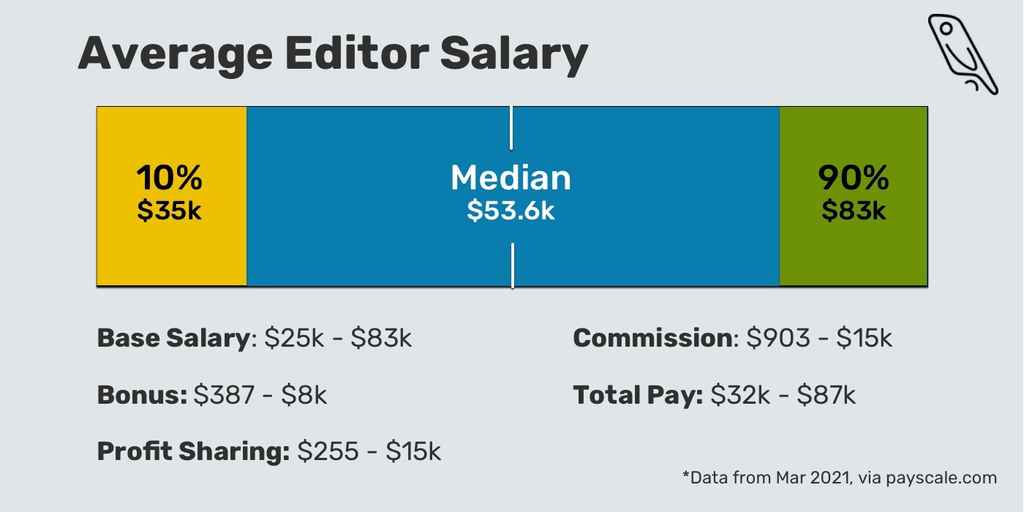 Of course, real life doesn’t fit into neat boxes in the way that data does. Like the majority of industries, the salary publishing houses are actually willing to pay you is subject to negotiation — especially if you’re more experienced. The broader your skillset and the more advanced you are in the career, the greater the possibility of earning better salaries, particularly if you take on the extra responsibilities of a managerial role.

How much book editors make varies from city to city, partly because of different costs of living, and also depending on how concentrated publishing houses are in certain cities. According to this Forbes article, the highest salaries can be found on the East Coast, with Massachusetts coming in at first place ($89,280) and New York a close second ($83,070).

The differences across states can be stark — with the lowest annual salaries mostly being found in the West and South: Montana ($41,030) and Louisiana ($42,340). This unsurprisingly reflects differences in costs of living and where centers of commerce are located.

The Big 5, for those not up to speed with publishing parlance, means the industry heavyweights (in the US, at least) — Penguin Random House, Hachette Book Group, Harper Collins, Simon and Schuster, and Macmillan.

Many would-be editors are attracted to these big publishers because of their glittering backlists, company perks, and industry clout. However, these bells and whistles don’t necessarily mean they will be paying more. As of the publication of this article, mid-level editorial jobs at Hachette are paying $45,000, whereas graduate roles are around the $30,000 figure — the latter of which is an industry standard, whether you’re at a boutique firm or a publishing juggernaut like Hachette.

When it comes to managerial roles, Big 5 publishers often pay more because of the scale and scope of production, even if base book editor salaries are similar across the board. That said, even if indie publishers have less titles to release each year, they tend to work in smaller, more tight-knit teams that are a little more dynamic when it comes to work delegation — which is a work life that some editors may prefer.

Freelancing: figuring out your finances

With the ability to set your own rates, pick projects that align with your interests, and employ a flexible schedule, working as a freelance editor is an increasingly attractive prospect for many professionals in the publishing industry.

However, you need to view your income differently if you go it alone. Unlike a salaried in-house employee, you’ll get paid per project, and certain factors will impact what you can charge (and thus earn) — namely your skillset, experience, and editorial niche. Let’s break this down.

A steady income is not a given

It can be hard to know what to anticipate earnings-wise. Former Big 5 (now freelance) editor Alyssa Matesic says that “your earnings are going to fluctuate month to month, especially if a client needs to postpone or cancel their collaboration.”

It takes patience and perseverance to build a freelance editing business. “I wish someone had told me how many clients you need to create a reliable flow of work,” editor Jasmin Kirkbride notes, “and that it could be a couple of years before you start being able to see where your income will be coming from six months in advance.”

On top of that, you’ll have to consider what rates to charge, which can be a bit baffling if you’re not used to the usual per-project standard rates. But there are a lot of resources and fellow editors out there to help you — beginning with some insights we’re sharing below.

On the bright side, freelance editorial rates, whether you're working with a publisher or indie authors, are often in line with those earned by in-house editors. The only limiting factor is often the freelance editor's ability to line up projects. If you can organize your projects well and ensure a steady stream of clients, there’s no reason why you can’t earn a “freelance editor salary” that’s comparable to an in-house salary.

Rates charged by freelance editors are often in line with what they'd earn at a traditional press.

The best way to get access to work is to get words out about your service on marketplaces dedicated to the publishing business. Reedsy is a freelance platform that connects publishing professionals with over 500,000 writers in search of editorial services. If you’re looking for a low commitment means to gradually build your business, Reedsy is for you.

Take control of what you earn with Reedsy

No bidding needed. Send in your quotes according to your skills and needs.

If you're someone who's worked in in-house positions before, you may find that there are ties you can use as you transition into full-time freelancing. For Tracy Gold, a Reedsy editor who stayed on at her in-house firm and got paid on an hourly basis as a freelance consultant, this was made easier by the fact she was able to migrate some clients over to her own freelancing business. “I quickly picked up enough new clients to make about 30% more than I did working full-time in about 50% of the hours.” 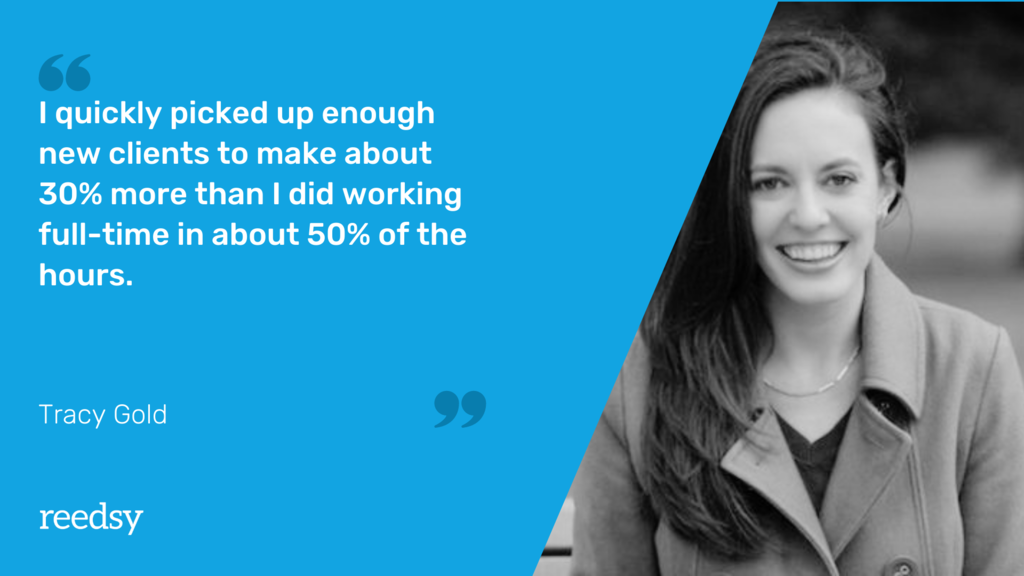 The risk of underselling yourself

As a newcomer, you might feel like you should make low offers to secure more gigs — but low-balling yourself is inadvisable, warns veteran editor Cara Stevens. “Never under-bid on a project just to win the business. You not only short-change yourself, you also cheapen your brand and lower the standard rates for your peers.” Providing quality service costs money and time, so make sure you don’t undersell yourself just to have work on your roster. 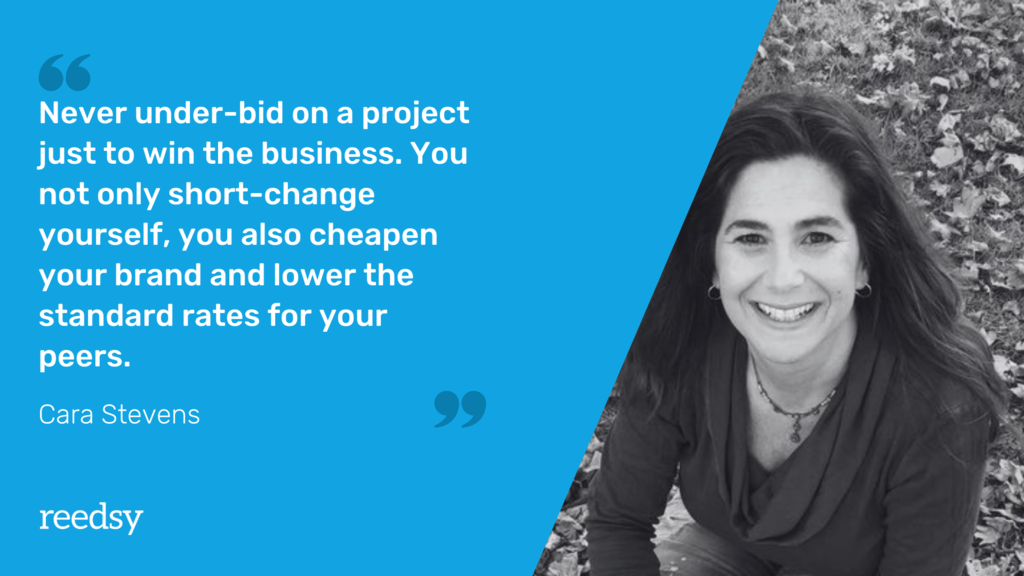 To get a general idea of the editing market, consult our freelance editing rates summary, the data for which was taken from the thousands of collaborations that we’ve seen happen on Reedsy.

You can also use our editing cost calculator (and even share it with your potential clients) to figure out your rate by genre. Factoring in the niche of your work can be crucial to deciding your rate: one wouldn’t charge the same for a copy editing project on a high-school YA novel as they would for a copy editing of a French naval history book. Along with your level of experience, the expertise you have in a specific niche gives you the ability to do what few other editors can, thus soliciting a higher fee.

Your rates should cover business costs

Another thing to consider as a freelancer is the fact that you’re effectively running a business, meaning there will be business costs that you’ll need to cover. You have to pay for MS Office apps, pay to set up your home office, pay to be part of networks like the Editorial Freelancers Association. You need to pay taxes and health insurance to cover for yourself when you’re sick — there isn’t a company to cover you anymore. Tracy stresses that it’s vital to remember that “if you get sick, there's no such thing as sick pay. If you can't work, you don't make money. I always try to have several months of living expenses saved just in case.” Aim to set a rate that allows you to, at the very least, cover these expenses so that your business is sustainable.

Julie Artz also points out that “the administrative side of running your own business takes up about half your time no matter how efficient you are. That admin includes bidding on jobs, doing sample edits, working on your website, creating blog and social media posts, creating and maintaining a newsletter, developing course content, continuing education, invoicing, bookkeeping/doing taxes, and anything else that you have to do to run your business, but do not get paid for.” At least, that is, not directly. You can make sure that you get paid for all that work by tracking non-billable hours and accounting for that as you write new quotes.

As long as you understand the crucial differences between in-house employment and freelance life, respect your own time and plan for emergencies, there’s no reason why you shouldn’t successfully earn a living without having to rely on an in-house editor's salary. Like Jasmin says, “if you can make it all work, it’s worth it: being a freelancer has wonderful flexibility, and you get to collaborate with a really broad range of businesses and writers.” Sounds good to us!

For more tips on freelancing in the publishing industry, follow Reedsy on LinkedIn!

Double your revenue this year

On Reedsy, you set your own rates and connect with over 500,000 authors looking for help to publish their books.