What will it cost you to self-publish?

How Much Do Authors Make? The Truth About Money in Publishing

How much can authors expect to earn from their books? A first-time author with a traditional publishing deal might expect an advance of $1,000-$10,000 and 5-18% royalties once they “earn out” their advance. Self-published authors do not receive advances, but their royalties can reach up to 70% for ebook editions.

If this sounds like cryptic mumbo-jumbo to you right now, that’s okay. In this post, we’ll break down money matters in publishing and help you understand how much authors make from publishing a book. For those already in the know, here are some up-to-date facts and figures: 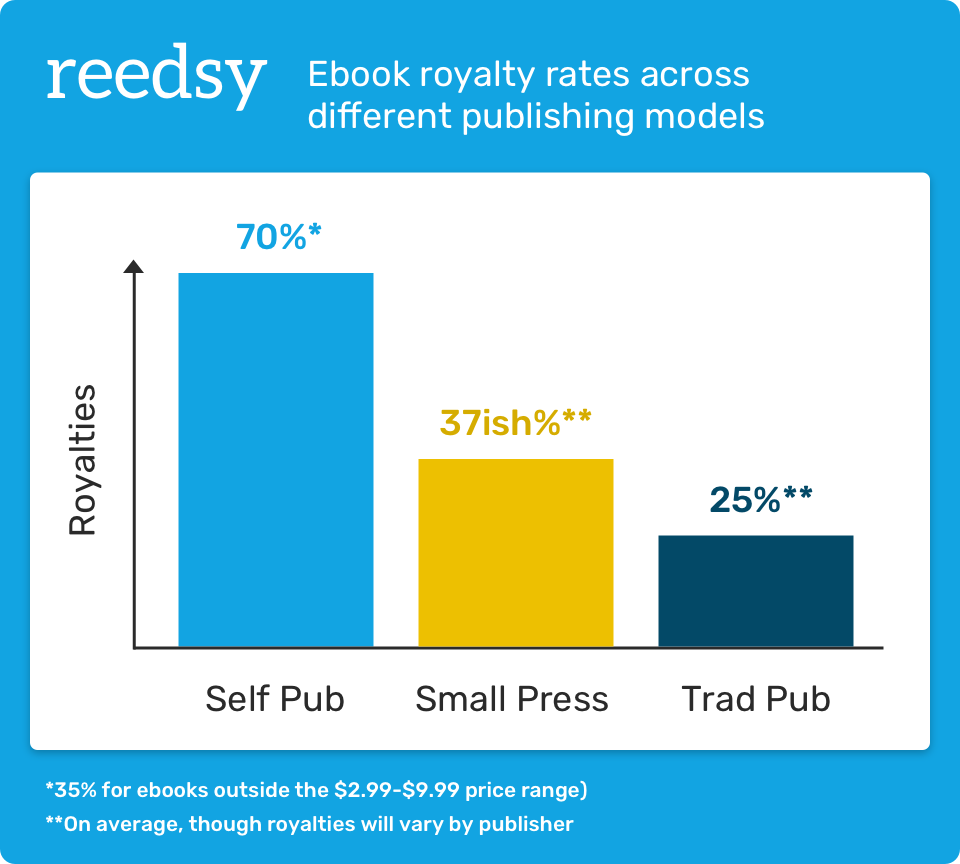 As you can already tell, an author’s income will depend on many factors (most of which are out of an author’s control). So, let’s look closely at the world of advances, royalties, and additional income streams. 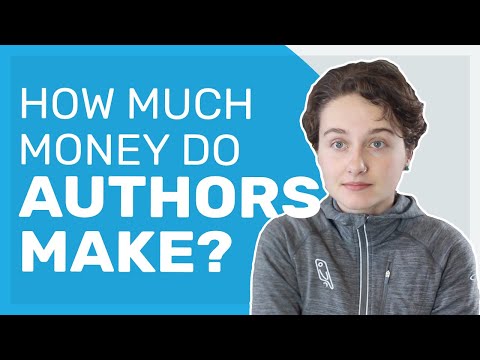 In traditional publishing, authors receive an advance on royalties based on how well the publisher thinks the book will sell. The advance is estimated on other factors too, such as the publisher’s size, and the author’s popularity and track record.

How much do authors earn from their books? Let's take a look at royalties and advances in publishing.

There are also outliers, of course, household-name authors who nab hundreds of thousands in advances. To name a few:

These authors are the exception, not the rule. They all published books with lower advances (or in Roupenian’s case, got a viral story in the New Yorker) before ascending to the six-figure mark. The lesson here is that you need to be at the top of your writing game before you can get there financially — and traditional publishing still requires a great deal of luck. If you're publishing traditionally, a reputable literary agent to help you negotiate the best possible deal. In that case, you can check out our directory of literary agents to find relevant candidates.

Moreover, one can’t ignore the racial disparities in trad pub payments exposed by 2020’s #PublishingPaidMe campaign, in which BIPOC authors reported much lower advances than white authors. To give a particularly egregious example, N.K. Jemisin — one of the most prominent sci-fi/fantasy authors working today, boasting four Hugo Awards and a MacArthur Genius Grant — received just $25,000 for each book in her Broken Earth trilogy. And this was after she’d published multiple successful series in the same genre!

#PublishingPaidMe was followed by an informal Twitter questionnaire, responses to which are available in this public spreadsheet, where you can get a sense of what advances are given to which genres, and how they might have been affected by biases.

If your book sells enough to repay the publisher of the advance they gave you, you’ll then earn royalties on the rest of the copies sold.

There is a staggering difference in the royalties earned by a traditionally published author and a self-published one. The former doesn’t have to take a financial risk to pay for book marketing, printing, and distribution, but agrees to receive lower royalties. In contrast, a self-published author takes ownership of the publishing process but also keeps most of the profit on each sale.

How much do authors make per book? 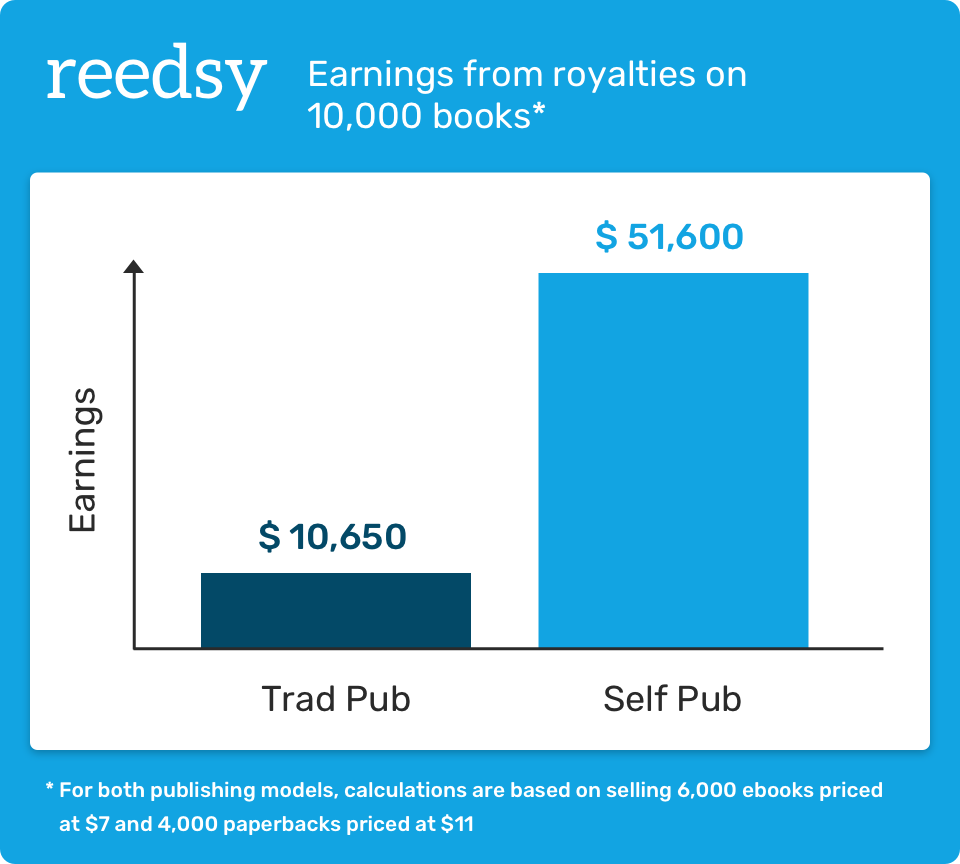 Let's look at an example to better illustrate the difference in potential earnings. Say you publish a novel traditionally and sell 4,000 paperback copies at $11 and 6,000 ebooks at $7 一 for a total of $86,000 in sales. At an average royalty rate of 7.5% on paperback and 25% on ebook sales, you’d earn around $10,650 from your royalty cut, then your literary agent would take a cut, too.

On the other hand, if you were to sell the same amount of copies independently, with 50% and 70% royalties for the two different formats, you’d make $51,600 一 five times as much.

Did you know that #indieauthors earn up to 70% royalties on ebooks, compared to 25% for traditionally published ones?

This significant income difference means that, outliers aside, many more self-published authors make a living than traditionally published authors, with self-publishing royalty earnings outpacing trad pub’s advance plus subsequent royalties. This was proven by several years of Author Earnings reports — most notably, one study that divided authors into groups earning more than $10k, $25k, $50k, and $100k. The study found that the number of indie authors earning 5-6 figures/year from book sales was much higher than the number of Big 5 authors earning the same.

Curious about the success an indie author can achieve? Check out this list of 8 self-publishing success stories every author should know.

Though the raw data is no longer accessible to the general public, the Author Earnings methodology was extremely thorough and more reliable than any self-selecting author surveys. Their reports analyzed the sales data of up to a million published titles, extracted directly from Amazon’s website. With that in mind, the major findings were as follows:

In short, indie authors tend to make more than traditionally published authors, especially if they’ve recently debuted. This is partly because indie authors often work harder for digital exposure (extra helpful for those with extensive backlists!), but mostly because they receive much higher royalties than their traditionally published counterparts.

Is self-publishing or traditional publishing right for you?

In addition to book sales, there are several ways for writers to supplement their income.

Suppose your work gains enough traction to transcend the book format. In that case, you may receive royalties from subsidiary rights for screen adaptations (what people call having your work “optioned” by a company like Netflix), or merchandise, which can range from branded objects like mugs or posters to clothing or special editions of your books.

Many authors also choose to offer freelance services like professional editing and ghostwriting in order to grow their income. If that’s something you’re experienced enough to consider, Reedsy’s marketplace could help you find fellow authors in need of your help.

Get editing & ghostwriting requests sent to your inbox

There are 500,000+ authors on Reedsy need help publishing their book

For more tips on how to pay the bills as an author, check out our 8 tips for making money by writing books.

What will it cost you to self-publish?