Part 1 – What is a Chapbook? (And Should You Publish One?)

Part 2 – How to Make a Chapbook 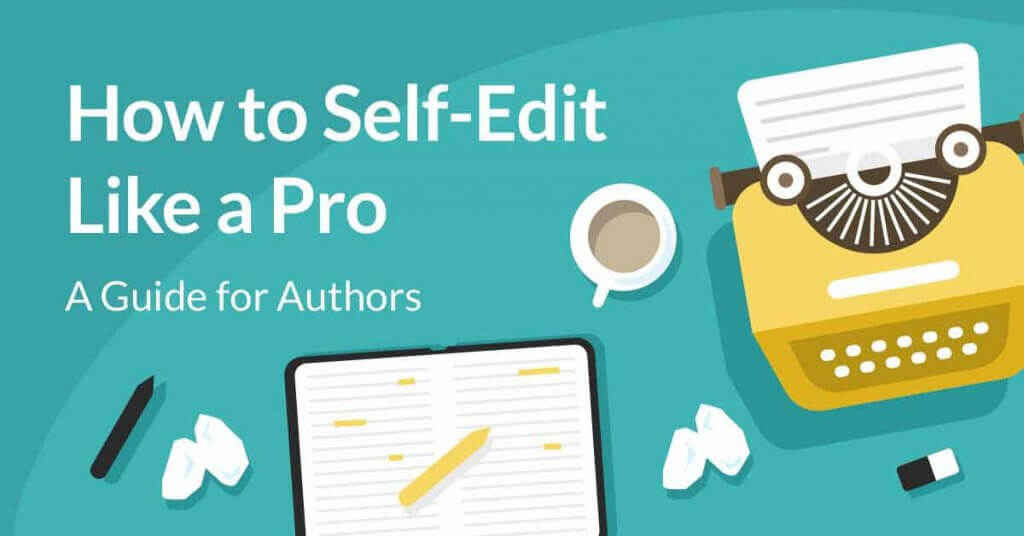 What is a Chapbook? (And Should You Publish One?)

Answer: A chapbook is a short book of poetry, usually ranging between 20-40 pages — in the UK, chapbooks are often called “pamphlets”, but they’re pretty much the same thing.

In this guide, we'll take a look at some of this medium's defining characteristics, the reasons why a poet might want to publish a chapbook, and how you can publish one. So let's get started.

Check out this comprehensive guide to chapbooks! Is a chapbook the right next step for your poetic career?

Chapbooks are, by necessity, quite short 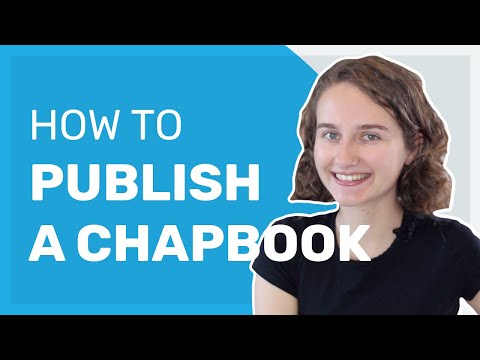 Since poems vary a lot in length, there’s no single established number of poems per chapbook. There could be a poem on every page or a handful of longer-form pieces spanning several pages each. The book could technically be a single, long poem, but this is very unusual, as chapbooks generally function as writing portfolios for poets (more on that below).

Note: A minority of chapbooks will feature short-form prose, like short stories or essays. Since poetry is far more common, our focus in this post will be on that.

Chapbooks are typically saddle-stitched — which means that they're bound with just a couple of staples along the spine, as below. The trim size will vary, but these days, you will commonly see chapbooks in a 6" x 9" format (the size of ARCH B paper folded in half). 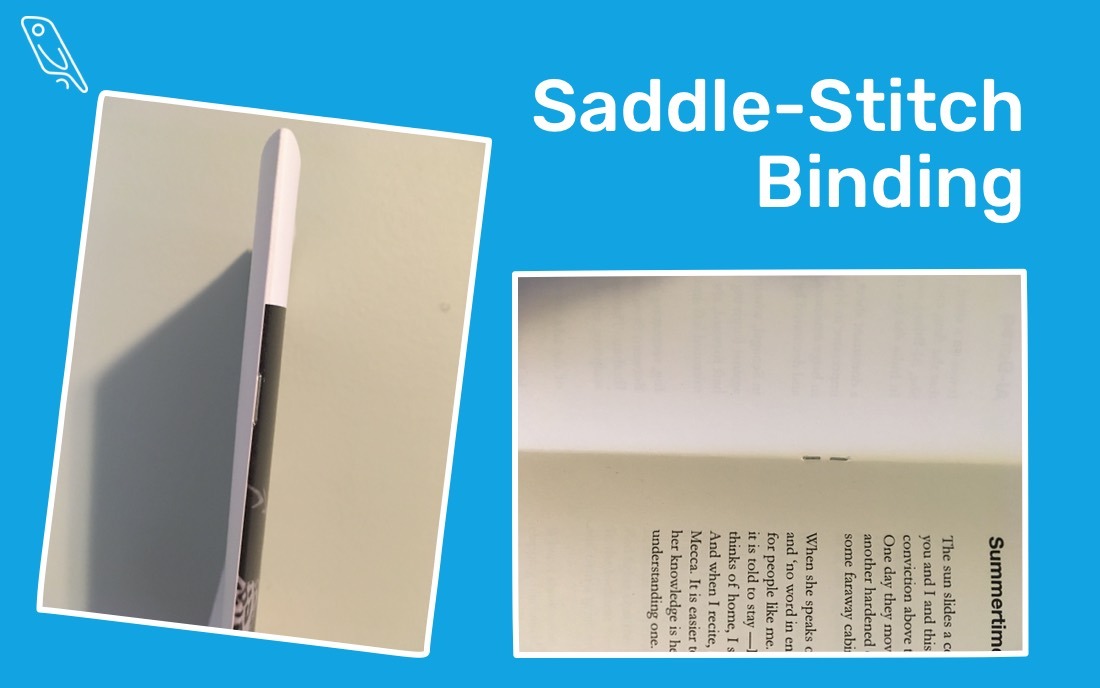 Because of this saddle-stitching, the page count must be quite short. UK chapbooks (ahem, pamphlets) rarely exceed 40 pages — which is 10 pieces of paper folded in half. If you've ever tried to fold a stack of printer paper more than ten sheets thick, you'll see where the problem lies.

The poems within each chapbook tend to be connected by a thematic or formal link. They might all be odes, elegies, or reinterpretations of mythology. For example, Vanessa Jimenez Gabb’s Weekend Poems is a collection of poems related to quotidian life, ordinary moments like watching Netflix or going to the gym. Similarly united by theme, the poems in Kaveh Akbar’s Portrait of the Alcoholic center around the poet’s recovery from addiction.

They were the voice of the American counterculture

The form itself dates as far back as the 18th century, though it was not exclusively associated with poetry at that stage. The modern chapbook can be traced back to the American Beat poets of the 1950s and 60s, when chapbooks provided a way to disseminate counterculture thinking without industrial printing presses. And though small, these poetry books were mighty!

With the advent of the internet, the modern chapbook took off in more creative directions, now sometimes taking the form of a PDF download, or a very short ebook (if the latter sounds interesting, check out our guide on how to publish an ebook). But that’s not to say that the traditional paper chapbook has lost its appeal.

In fact, the chapbook, historically tied to self-publishing, continues to be held in high regard within the literary world, with independent publishers and chapbook contests eager to find the next great poetic voice. Because of its unique role in the poetic community — one that has yet to be replaced by any other medium — the chapbook form is far from dead.

Before we get ahead of ourselves and go ‘all-in’ on chapbooks, let’s take a quick look at some of the benefits and drawbacks of publishing your poetry in this format.

A way for emerging poets to make their names

It’s been said many times in the publishing world that a chapbook is a poet’s calling card: a tantalizing sample of their work. Poet Jackie Kay writes that “[chapbooks] are the connoisseur's version of a very tasty starter. Straight away, they give you a sense of somebody, an idea of their voice, just enough to make you know that you'd like more — or not.” In other words, a chapbook is the perfect way for a newcomer to break into the literary industry.

It’s hard to get a book deal for your first poetry collection, so many poets begin their careers by sharing their work online, participating in events like open mic nights, submitting poetry to literary magazines, or releasing a poetry chapbook/pamphlet. These short books function as a serious first step into poetry publishing, and help establish your name and reputation.

Provided your chapbook is well-received, it can also increase your chances of having a full-length collection published down the line, as poetry editors at large publishing houses and small presses alike stay up to date with new releases with an eye to adding new voices to their lists. At the same time, if your chapbook becomes commercially successful, that’ll give you an advantage when you get to a stage where you’re submitting your debut poetry collection to publishers, since it’s clear evidence that there’s an eager market for your work.

Pro tip: Most traditionally-published poets don’t actually need to find a literary agent to arrive at a book deal for their poetry collection.

Many of today’s established poets published chapbooks (often in limited editions) in the early stages of their careers:

They are fairly inexpensive to make...

Chapbooks are a seriously low-cost option, especially if you plan to self-publish yours. Most poets opt for small print runs of more or less 150 copies (though this varies, depending on the size of each poet’s following), or cost-effective print-on-demand services. With either option, you avoid high upfront printing costs, so you can make your chapbook with a smaller budget. Add to that the fact that they’re saddle-stitch bound, and the cost becomes even lower.

...but also hard to profit from 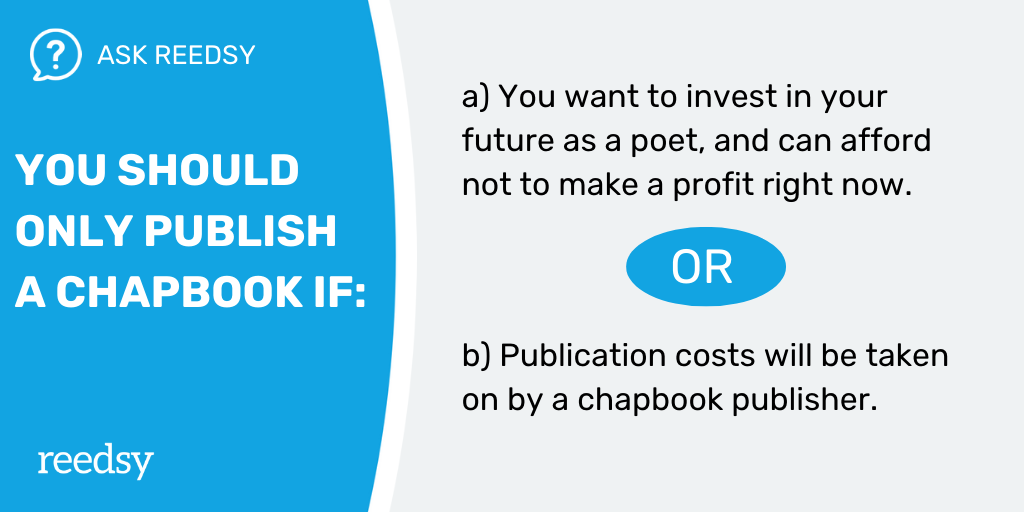 Sure, chapbooks are inexpensive to make, but they’re also inexpensive to buy for the same reasons, so their profit margin is pretty slim. Equally, a small print run also means you’re unlikely to make a significant profit from the sales of your chapbook. As a result, chapbooks are not really a step you take with profit as your main goal. Their main function is to advance your career as a poet, so you should only publish one if:

Whatever you decide, we hope this post has helped you understand what chapbooks are, what role they play, and whether you should publish one.

If it sounds like a chapbook is right for you, head to part two of this guide to learn how to make a chapbook!