To err is human, in the words of Alexander Pope — or, in the slightly goofier words of Pam Beesly, pobody’s nerfect. It stands to reason that if you want your fictional characters to be as well-rounded and relatable as actual people, you’ll need to give them a few character flaws.

While it might be hard to bestow your precious characters with such defects, you’ll find they ultimately enrich your story: giving your characters deeper motivations, strengthening their interactions, and adding nuance to how they deal with the central conflict(s) in your plot. Not to mention that there are so many complex and fascinating character flaws to choose from, you might even find yourself excited to “mess up” your characters!

But before we get to our extensive list of character flaws, let’s go over what a character flaw is and the different types you’ll see in stories.

What is a character flaw?

A character flaw is a negative quality in a character that affects them or others in a detrimental way. Of course, the degree of this effect varies hugely based on the flaw itself. A long-winded character may be unpleasant to talk to, but they’d surely be much more pleasant than a character bent on murdering you.

Nonetheless, “chatterbox” and “homicidal” both fall on the spectrum of character flaws! Between them is a vast ocean of unfortunate things a character can be: prideful, foolish, irritating, selfish, aggressive, obsessive, or simply naïve. Each of these has certain expected consequences — but the beauty of flaws is that each will still present differently in different characters, depending on that character’s other traits, background, and circumstances. 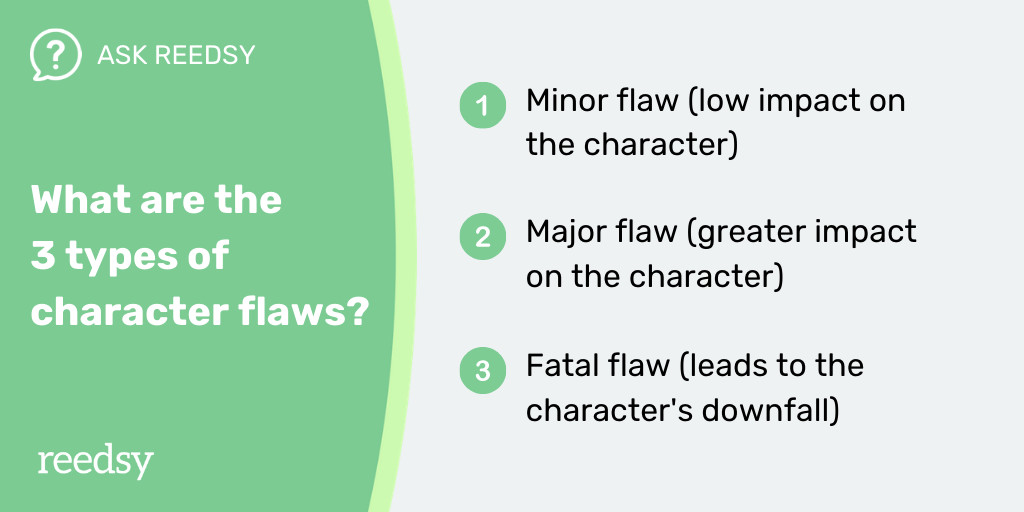 There are three types of character flaws: minor, major, and fatal. A minor flaw is something that has minimal impact on a character’s life; a major flaw affects them more significantly; and a fatal flaw causes that character’s downfall (though this is not always literal death — sometimes it’s moral death, the death of a relationship, etc.).

As you’d expect, minor flaws are typically things like poor hygiene and forgetfulness. Major flaws tend to be more like hypocrisy and envy, and a fatal flaw would be something like the propensity to self-sabotage, or extreme hubris.

However, note that the outcome of a flaw depends entirely on the character’s handling of it! What functions as a minor flaw for one character could be a fatal flaw for another. For example, in Little Women, Amy’s vanity is a small, amusing aspect of her character, out of which she (mostly) matures; for Narcissus, on the other hand, vanity proves fatal.

So while we’ve attempted to divide up the following list by degrees of severity, remember that a seemingly innocuous flaw can turn fatal if not kept in check, and that even the grimmest of flaws may still be managed. Indeed, some of the most interesting stories result from subverting readers’ expectations for how a given flaw will play out!

Pro tip: Choose a flaw for one of your characters, then try a few character development exercises to see how it might manifest.

With all that in mind: here are 70 fascinating character flaws to use in your story, with examples from literature to demonstrate each one.

Most of these character flaws are more annoying than harmful; some are even a little endearing. Others do have the potential to harm, but rarely evolve to that extent. If you’re looking for a minor flaw to round out your likable protagonist, this section is for you!

2. Boring – dull, tedious, uninteresting (not to be confused with a flat character, who’s not even developed enough to be boring). Example: Mary Bennet in Pride and Prejudice.

3. Capricious – given to flights of fancy and impulsive behaviors. Example: Lily Bart in The House of Mirth.

7. Gossipy – inclined to spread rumors or talk about others behind their backs. Example: Mrs. Jennings in Sense and Sensibility.

8. Gullible – easily fooled or persuaded to believe something. Example: Valentine Michael Smith in Stranger in a Strange Land.

9. Humorless – having no sense of humor; solemn. Example: Percy Weasley in Harry Potter.

11. Meek – overly gentle and submissive. Example: Charlie Kelmeckis in The Perks of Being a Wallflower.

15. Prideful – having a lofty opinion of oneself and rarely admitting to being wrong. Example: Mr. Darcy in Pride and Prejudice.

16. Shallow – having few profound thoughts and caring only for insignificant things. Example: Daisy Buchanan in The Great Gatsby.

17. Skeptical – doubtful or disbelieving. Example: Lucy’s siblings (at first) in The Lion, The Witch, and the Wardrobe.

19. Spoiled – bratty and self-centered as a result of overindulgence. Example: Mary Lennox (at first) in The Secret Garden.

20. Stubborn – willful and headstrong; refusing to give up. Example: Anne Shirley in Anne of Green Gables.

21. Tactless – not very nuanced or sensitive in dealings with others. Example: Hermes in Circe.

Do even these “mild” character flaws seem too extreme to you? Then maybe you’re not looking for a flaw, per se, but an unusual quirk or mannerism to bring your characters to life! We’ve got you covered with this list of 150+ useful character quirks and this BONUS list of 150+ powerful mannerisms to help define your characters.

These character flaws should be taken more seriously: they can impact a character’s life quite heavily, as well as the lives of those around them. From adultery to greed to pure stupidity, if you choose one of these flaws for your character, make sure you’ve carefully considered how it will shape their story — and indeed, whether that journey will end with them overcoming their limitations or atoning for their sins.

23. Adulterous – cheating on one’s partner or spouse. Example: John Proctor in The Crucible.

25. Apathetic – having little interest in or enthusiasm for life. Example: The narrator in Fight Club.

27. Belligerent – hostile and aggressive, even when unprovoked. Example: Curley in Of Mice and Men.

28. Bitter – resentful and unpleasant because of a past experience. Example: Miss Havisham in Great Expectations.

29. Cowardly – lacking the courage to stand up for what’s right. Example: Arthur Dimmesdale in The Scarlet Letter.

30. Dishonest – lying or behaving in a deceitful manner, usually to take advantage of others. Example: George Wickham in Pride and Prejudice.

31. Envious – wanting to possess what another has (may be a physical object or a character trait). Example: Gene Forrester in A Separate Peace.

32. Greedy – always desiring more (food, wealth, attention, etc.), even to their own detriment. Example: Augustus Gloop in Charlie and the Chocolate Factory.

33. Hedonistic – indulging completely in the pursuit of pleasure. Example: Dorian Gray in The Picture of Dorian Gray.

34. Hubristic – excessively self-confident in one’s ideas or abilities. Example: Icarus in the Metamorphoses.

35. Hypocritical – acting in opposition to one’s beliefs or proclamations about others, typically because one believes they are “above” them. Example: Mr. Brocklehurst in Jane Eyre.

39. Judgmental – critical and disapproving, often in an outspoken way. Example: Holden Caulfield in The Catcher in the Rye.

41. Morally gray – neither good nor evil in a conventional sense; characterized by moral ambiguity. Example: Kaz Brekker in Six of Crows.

42. Obsequious – so deferential and flattering as to be unsettling. Example: Uriah Heep in David Copperfield.

44. Quixotic – overly idealistic and hindered by their own expectations. Example: Emma Bovary in Madame Bovary.

45. Rigid – utterly inflexible in one’s principles, even when presented with reason to change. Example: Javert in Les Misérables.

46. Selfish – being solely concerned with one’s own needs and desires. Example: Scarlett O’Hara (at first) in Gone With the Wind.

47. Short-tempered – quick to anger. Example: Jack Torrance in The Shining.

50. Stupid – showing little intelligence in one’s decisions or actions. Example: Joffrey Baratheon in A Song of Ice and Fire.

51. Vengeful – seeking ramifications for others as a form of revenge. Example: Edmond Dantès in The Count of Monte Cristo (though to be fair, he’s pretty justified).

Not sure what sort of character you’re writing yet? Perhaps this primer on the 12 types of characters featured in most stories can help you out!

Now for the character flaws you’ll most often see in outright villains: cruelty, treachery, a total lack of remorse, and so on. While it’s certainly fascinating to think about how such deep-seated flaws can be effectively balanced with other traits, take caution! Some readers may be unable to forgive protagonists who demonstrate these flaws, even over the course of multi-book character arcs to show they’ve changed.

That said, if you’re looking for a challenge (or aiming to create that once-in-a-blue moon egregious antihero who’s just sympathetic enough to work), have at it. But don’t say we didn’t warn you — and consider getting a sensitivity reader if you’re working with a flaw that involves a delicate issue, like bigotry or abuse.

53. Abusive – engaging in habitual and extreme cruelty or violence. Example: Alphonso in The Color Purple.

55. Cruel – willfully causing pain and suffering to others. Example: Heathcliff in Wuthering Heights.

56. Disloyal – failing to remain true to the person/entity to whom one has pledged their allegiance. Example: Brutus in Julius Caesar.

57. Fanatical – extremely zealous to the point of delusion. Example: Annie Wilkes in Misery.

58. Intolerant – narrow-minded and unaccepting of others, sometimes to the point of violence. Example: Bob Ewell in To Kill a Mockingbird.

60. Manipulative – conniving and controlling others to get what one wants. Example: Amy Dunne in Gone Girl.

61. Murderous – desiring to kill; homicidal. Example: Hannibal Lecter in Silence of the Lambs.

62. Neglectful – failing to give proper care or attention to someone or something. Example: Paul Dombey in Dombey and Son.

63. Obsessive – so consumed by a single subject that one cannot function normally. Example: Captain Ahab in Moby-Dick.

64. Oppressive – brutally authoritarian toward a group of people considered “lesser.” Example: The Commanders of Gilead in The Handmaid’s Tale.

65. Paranoid – unusually suspicious, mistrustful, or nervous that something bad will happen to them. Example: Raskolnikov in Crime and Punishment.

66. Remorseless – feeling no shame, regret, or sympathy when they’ve done something wrong. Example: Anthony James Marston in And Then There Were None.

67. Sadistic – taking pleasure in inflicting pain or humiliation upon others. Example: Nurse Ratched in One Flew Over the Cuckoo’s Nest.

68. Self-destructive – acting in such a way as to destroy one’s own health and/or happiness. Example: Anna in Anna Karenina.

Our imperfections as humans are what make us unique, and the same is true of imperfections in our characters! Whatever flaws you invoke in your story, don’t be afraid to dive deep to create truly distinct, memorable characters — characters that readers will remember forever, even if they’re not always well-behaved.

Looking for more character-building resources? Check out these posts: