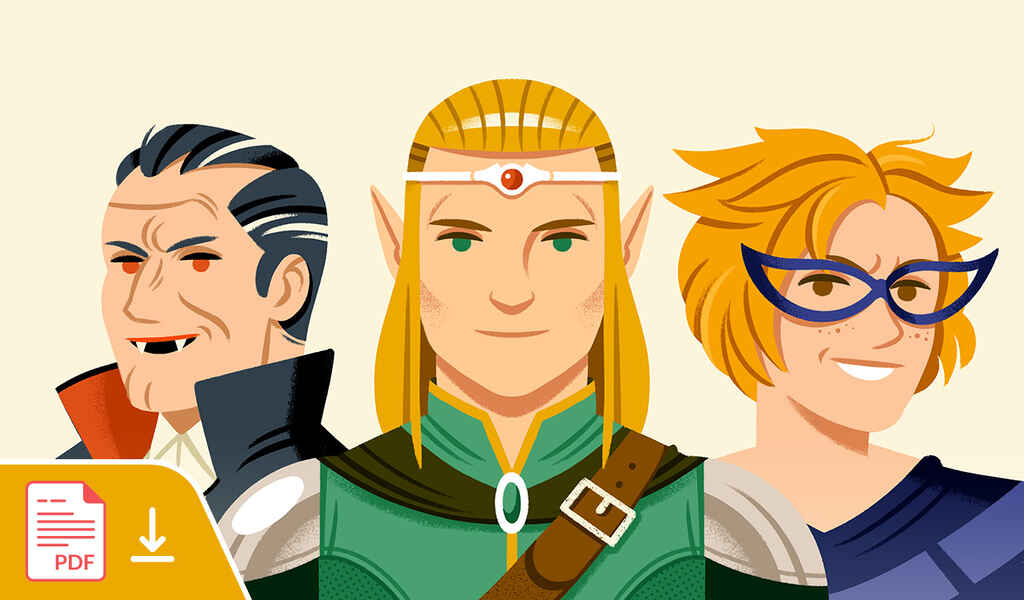 What is a Flat Character? Definition, Examples, and Tips

“Riddled with flat characters” is perhaps the most damning thing you can hear from an editor or reviewer. An accusation that your characters read like a cardboard cut-outs is like a knife in the heart of any fledgling writer. But having a flat character or two isn't the end of the world — or even the end of your story! And if you can learn how to turn a two-dimensional character into a three-dimensional one, you'll have a real leg up on all future character creation. Sometimes the hardest part is simply identifying when you do have a flat character on your hands... especially if you're not exactly sure what constitutes one. Which is why we want to illustrate exactly what is a flat character: with a clear definition, examples, and instructions on how to fix any flat characters you may come across in your writing. First off, let's talk about what this term means.

What is a flat character?

A flat character is a character with little to no complex emotions, motivations, or personality. They also don't undergo any kind of change to make them more well-rounded. In other words, they're the opposite of a "round character," who has a fully fleshed out profile and changes throughout the story. A flat character will typically:

Whereas a three-dimensional or round character will typically:

Flat characters are also sometimes referred to as “one-dimensional” or “two-dimensional." Both of these monikers point to the same thing: a character who has very minimal complexity, and often renders the story less believable as a result.

Are you accidentally writing a flat character? Learn more in this post #amwriting

Not all static characters are flat

Again, having two-dimensional characters never spells automatic death for your book. And the occasional flat character can even benefit your narrative! Charles Dickens, for instance, was a genius at writing casts that were packed with memorable caricatures. Are Miss Havisham, Mrs Micawber, and Mr Jaggers flat characters? Absolutely — they have few complex characteristics and exist mostly to interact with the main character of their respective stories. But does their flatness make them inherently uninteresting or irrelevant to the story? Not necessarily. Flat characters can fulfill a number of roles: they populate the environs of the protagonist’s journey, and can move the story along in a plot-driven book. You really just don't want your main character(s) to be flat, otherwise your audience will lose interest in them.

How to fix a flat character

1. Flesh out profile and backstory

To give a character more “dimension,” try thinking about them as an actual human being. What defines them? Which features are central to their very being? What gets them out of the bed each morning? What are their quirks, strengths, and weaknesses?

For example, you might start out with a two-dimensional character who's a greedy businessman. But is he a dog-lover with five Corgis at home? Is he a secret aficionado of Zumba on the weekends? Does he lie awake at night figuring out how he’s going to put his children through private school? This combination of personality, preferences, internal conflict, and motivations should help round him out.

A well-written, three-dimensional character will make readers think that their life stretches beyond the pages in the book. When Jane Austen tells us on the last page of Pride and Prejudice that Elizabeth Bennet and Mr Darcy live happily ever after, we believe her because the depth of both characters enables us to imagine it for ourselves.

Likewise, you can test the depth of your character by putting them into unrelated scenarios of your own making. You don’t necessarily need grand situations, and these scenes certainly don't need to show up in your book. Instead, simply jot down a couple of scenes with the character going about everyday life or struggling to deal with a normal problem. If you’d like a push in a more specific direction, check out these character exercises.

As you proceed with your character development, consider how your characters are going to change throughout the story. This will plant the seeds for their character arcs, which is all about what the character wants/needs — and how they need to grow to achieve it. To quote Kurt Vonnegut: “Every character should want something, even if it’s only a glass of water.”

This story goal is the Holy Grail for all three-dimensional characters. It will be the raison d'être for your story and will largely impact the shapes of both the narrative and character arcs.

One way to go about visualizing each arc is by plotting a timeline on a blank sheet of paper. Mark down the major events (or “turning points”) of your story on it. Then draw a second line beneath the timeline to trace character growth at the same points in time. How does each external event affect your character? Do these changes bring your character closer or farther to the story goal? A character’s internal development isn’t always straightforward (think Hamlet), but it does generally correspond to the events that are happening concurrently in the narrative arc. All these strategies should help you avoid flat main characters. The following examples will give you an idea of when they can be used effectively — as minor or simple characters, or characters in extremely plot-driven stories.

Whether they’re chilling in the background or spearheading an adventure, two-dimensional characters are more prominent than you might think! Now that you know what a flat character is, let’s take a look at how they exist across different genres and mediums with these flat character examples.

Who are some famous flat characters? Find out in this post!

Summed up in one sentence: A brilliant, cold, and intelligent detective. Purpose in the story: To serve as the untouchable figurehead in a straight detective series.

Summed up in one sentence: An uneducated, gentle, kind blacksmith. Purpose in the story: To love and support Pip as his uncle. Joe is the unwavering moral compass of the book.

Summed up in one sentence: A feisty girl who’s the youngest sibling in the Weasley clan. Purpose in the story: To be Harry Potter’s love interest.

Note: Ginny does undergo a personality change mid-way through the series! Originally a shy girl in the first five books, she's suddenly a strong-willed and outspoken teenager in the sixth book. However, this character growth is “told” to us, not “shown” (and it doesn't make Ginny any more complex). Her change in character is for plot convenience more than anything else.

4. Gandalf from Lord of the Rings

Summed up in one sentence: A wise wizard who acts as a force for good. Purpose in the story: To guide the Fellowship's travels across Middle-Earth to defeat Sauron. In the context of the Hero’s Journey, he also is the personal mentor for Frodo.

Summed up in one sentence: A pretty, gentle, passive girl with a heart of gold. Purpose in the story: To be the perfect heroine in a timeless story about good triumphing over evil and people getting their karmic due.

Summed up in one sentence: The girl next door who’s the object of Peter Parker’s affection. Purpose in the story: To be the damsel in distress whom Peter rescues time and time again.

Summed up in one sentence: A popular high school student who isn’t the brightest bulb in the box. Purpose in the story: To be the comic relief. (Though, to be fair, she would unquestionably make a great weather reporter!)

8. Mr Collins from Pride and Prejudice

Summed up in one sentence: A silly, pompous, vain, obsequious clergyman with narcissistic tendencies. Purpose in the story: To represent the stereotype of the silly, servile parts of British society that Jane Austen ends up eviscerating.

So why do authors write flat characters?

As you can see, authors utilize flat characters in a number of ways. Writers generally bring them out when:

So a flat character isn't necessarily a bad character; it's all about how you use them. Some very popular stories make almost everyone into flat characters except the protagonist(s). However, when it comes to standard literature, it's usually best to steer clear when possible. As a general rule, the more complex and multi-dimensional you make your characters, the deeper you'll pull readers into the vivid world of your story — and that goes for all characters, not just the ones we see the most.

Do you have any favorite flat characters? Have you included any two-dimensional characters in your own work? Let us know in the comments below.

Hey! Every character should want something, even if it’s only a glass of water.