Part 3 – How to Create Conflict

Written by the Reedsy Team

7 Types of Conflict in Literature (and How to Apply Them)

In literature, conflict is any struggle that characters must overcome to achieve their goal. It can be a ‘real world’ obstacle or antagonist (external conflict) or some inner turmoil that our heroes must confront before getting what they want or need (internal conflict).

As we mentioned in the previous section, all good stories are driven by conflict. By understanding what stands between characters and their goals, we can begin to grasp what their stories are about. The seven most common types of conflict in literature are:

In this post, we will analyze these types of conflict and provide examples from the world of popular fiction.

The 7 most common types of conflict in literature... revealed!

Before we get into some of the more abstract types, let’s first look at what most readers think about when they imagine ‘conflict’.

Pesky people: they cause trouble wherever they go! That’s the crux of this type of external conflict, which you’ll find in many, if not most, stories. "Character versus character" can mean both black-and-white struggles (cops vs. robber, hero vs. villain, etc.), but it can also cover subtler kinds of personal confrontations: romantic entanglements and familial disputes, for example.

Character vs. character conflict is commonly rendered as the traditional “protagonist vs. antagonist” setup, where these two central characters will usually have diametrically opposing goals. For example, the protagonist might be a cat burglar looking to steal a priceless painting, while the antagonist – a corrupt gallery owner — wants nothing more than to stop them.

Les Misérables: Former convict Jean Valjean restarts his life with a new identity, seeking to create a more just society for the underclasses. He is discovered and pursued by Inspector Javert, whose fanatical devotion to the law has blinded him to the actual injustices being perpetrated by the system.

The Great Gatsby: Self-made millionaire Jay Gatsby wants nothing more than to win over his childhood crush, Daisy Buchanan. Standing in the way of Gatsby’s goal is Daisy’s husband, Tom Buchanan, an old-money cad with a mile-wide mean streak.

Don't know how to weave two great characters together into a strong narrative? Check out our free novel writing course.

Particularly prevalent in fiction these days, this type of external struggle pits the individual against the collective. In this case, “the collective” might take the form of something like:

In this type of conflict, society will put pressure on our character to change and fall neatly into order. On the other hand, our protagonist will resist this change and, in extreme cases, will try to bend society to fit their vision. Like the story of David and Goliath, our hero faces an uphill battle, but the reader holds out hope that ‘the little guy’ can overcome a seemingly impossible challenge.

Examples of character vs. society conflict

The Hate U Give: When her friend is shot dead by a cop, African American teenager Starr seeks justice, but finds herself up against a system of structural racism that stretches from the police and media, all the way to her private school and internalized racism.

The Devil Wears Prada: Idealistic university graduate Andrea “Andy” Sachs moves to New York and soon lands a highly coveted position as the junior assistant to Miranda Priestly, the tyrannical editor of a fashion magazine. A fish out of water, Andy enters into a world that directly conflicts with her principles but finds herself compelled to conform to the cut-throat world of fashion journalism in order to fast-track her career.

How do you fancy your chances in a fight against Mother Earth? In this type of conflict, that is exactly what our protagonists are facing. Whether it’s wildlife (Jaws), natural disasters (The Day After Tomorrow), the weather (The Perfect Storm), or a post-apocalyptic landscape (The Road), the antagonists in this type of conflict cannot be reasoned with.

Stories that feature a “character vs. nature” conflict will usually center on a character’s survival. In the absence of a human antagonist, our heroes will often discover that “character vs. self” conflict (something we will touch on later) is at the heart of their narrative arc.

Examples of character vs. nature conflict

The Martian: Stranded on the Red Planet, astronaut Mark Watney must overcome its unforgiving environment and survive long enough to be rescued. Using his resourcefulness, he must overcome the obstacles that Mars presents by growing food and find a way to communicate with Earth.

Moby Dick: Ahab, the captain of the Pequod, launches a voyage in search of a white whale that previously took his leg. The crew faces many natural challenges on this ill-fated journey, including storms, harsh waters, and the titular whale Moby Dick.

Conflicts against larger forces are best described by showing, not telling. Take our course below to master this fundamental rule of writing.

Since the dawn of the industrial age, humanity has had a turbulent relationship with technology. Some see scientific progress as a defiance of God and the natural, while others have used it to question the limits of our morality, patience, and greed. While the idea of ‘character vs. technology’ might summon up the image of a Terminator-like robot apocalypse, this type of conflict could also be as modest as someone struggling to teach their Grandma Millie how to use emojis!

Examples of character vs. technology

Frankenstein: A scientist brings to life a creature made out of spare human parts. This ‘monster’ quickly becomes sentient and exceeds his creator’s wildest expectations, leading to Dr. Frankenstein’s demise on the tundra. Subtitling her book “The Modern Prometheus,” Mary Shelly likened her hero to the mythic Greek figure who stole fire from Zeus, putting a fine point on the idea of humans daring to play God.

Do Androids Dream of Electric Sheep?: In the distant future of 1999, bounty hunter Rick Deckard is given the task of retiring (read: killing) a group of androids recently escaped from a Mars colony. The only problem? These synthetic creatures are practically indistinguishable from real people. When Deckard falls for one of these androids, he begins to question the very nature of humanity.

When your hero finds themselves up against something that cannot be explained by logic or science, they are probably in conflict with supernatural forces! While some writers employ this type of conflict to tell rip-roaring tales, supernatural stories can also explore human fears and inexplicable everyday events.

In practice, character vs supernatural conflicts will often see the protagonist face off against the forces of fate, religion, ghosts, gods, demons or aliens.

Examples of character vs supernatural

Ghostbusters: Three disgraced scientists (and a guy they find on Craigslist) set up shop as supernatural pest controllers, ridding New York of hungry ghosts and spectral librarians. But when a Sumerian god arrives looking to enslave the world, our four heroes must answer the age-old question: does bustin’ make them feel good?

The Strange Case of Dr. Jekyll and Mr. Hyde: A doctor in Victorian London creates a serum that causes him to become his evil alter-ego, Edward Hyde. Inspired by the real-life case of Deacon Brodie, an upstanding Edinburgh citizen by day and burglar by night, author Robert Louis Stevenson uses this supernatural tale to depict one man’s struggle against his inner demons.

A fight against the supernatural might require detailed worldbuilding, which you can learn all about it in our ultimate guide below. 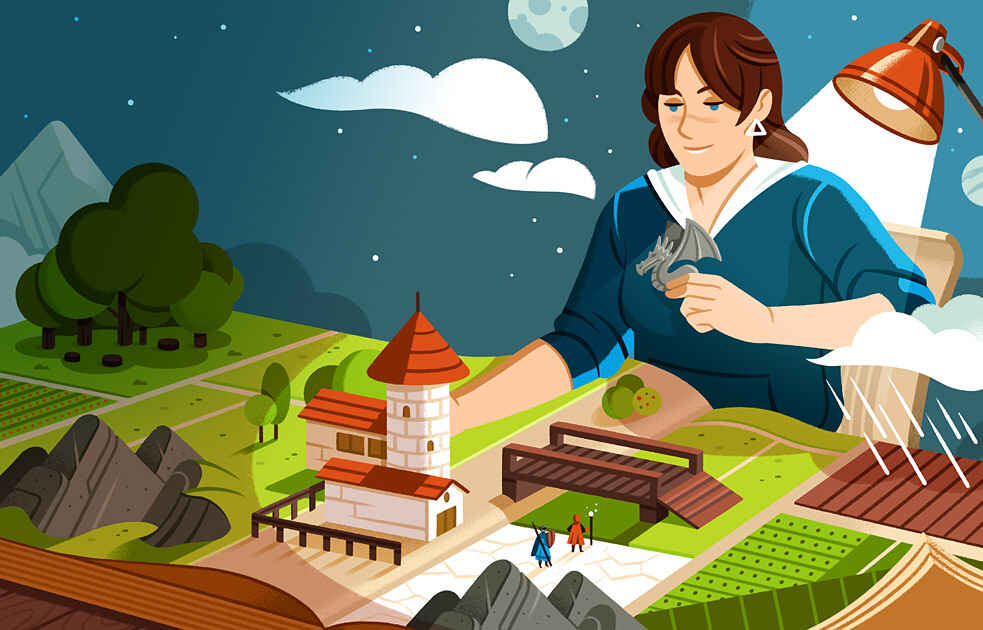 130 questions to help create a world readers want to visit again and again.

Similar to “character vs. supernatural,” this conflict deserves its own entry — if only for its historical significance. “Character vs. fate” can include dealings with God or the gods and their prophecies — where our protagonists desperately try to assert their free will. This is a common trope in Greek tragedies, where the characters can do nothing but endure the destinies befallen to them.

Examples of character vs. supernatural

Macbeth: In Shakespeare’s “Scottish play,” the Thane of Glamis receives a prophecy from three witches that foretells his rise to the throne of Scotland. However, the witches also reveal that his buddy Banquo will father a line of kings — which gets Macbeth more than a little worried. In his fight against this fate, Macbeth takes extreme measures that prove to be his undoing.

If these stories teach us anything, it’s that tragedies are almost always self-inflicted!

Until now, these types of conflicts have seen our heroes deal with external forces. For our final entry on this list, let’s look at what is perhaps the most important conflict of all.

Writer Maxwell Anderson once said that “the story must be a conflict, and specifically, a conflict between the forces of good and evil within a single person”. Though that might be an oversimplification, every interesting story will indeed, at some point, involve a character’s inner dilemma. That’s because, as James N. Frey points out in How To Write A Damn Good Novel, a reader experiences the most empathy for a character when that character is in the middle of some intense inner strife.

Internal strife will stem from a debate that occurs within a character. It might originate from any combination of the character’s expectations, desires, duties, and fears. To get what they want, they must make a choice that threatens to change the very fabric of who they are.

Examples of character vs. self

The Hunger Games: Kind-hearted teen Katniss Everdeen is drafted as a contestant in a deadly reality show staged by a totalitarian government. As per the rules of the game, in the end, there can be only one — to survive, it seems that Katniss must overcome her reluctance to kill. Will she stick by her principles, even if it ultimately results in her death?

Great Expectation: Pip, a poor Blacksmith’s boy, is plucked from obscurity by a mysterious benefactor and allowed to become a London gentleman. Seeing this as his only chance to ‘better himself’ and win the heart of his childhood crush, Pip finds himself torn between getting everything he ever wanted and protecting his ideals. Will he devote himself to becoming a callous member of the upper-middle crust or remain loyal to his family and authentic self?

Now that you’ve seen the many faces of conflict in a story, it leaves only one question: how does a writer use this knowledge to benefit their own writing? In the final section of this guide, we’ll answer that very question as we show you how to identify and accentuate conflict in a story.

thanks - great article with clear explanations, will help my kids with their english lit homework!

Thanks- Wonderful job - but I just want to know, whether you have proposed the seven types of conflict or somebody else, if so would please mention his/her name.

This is highly educative. I appreciate this information.