Part of the magic of great fiction is its ability to let you see their characters in your mind’s eye. Think about Sherlock Holmes and you might picture him smoking a pipe, or stroking his chin in thought. Or Anne Shirley from Anne of the Green Gables, who might at any moment be gesturing enthusiastically and talking a mile a minute.

Much of this ability to conjure actors in this theatre of the mind comes from one simple trick in the book of character development: character mannerisms. A well-observed tic or recurring behavior can unlock your characters and bring them to life in your audience’s imagination.

If you’re wondering how to start going about it, you’ve come to the right spot on the Internet. We’ve split this post into three parts: what character mannerisms exactly are, how to write them into your story, and a list of 150+ mannerisms for you in case you're running short on inspiration.

What are character mannerisms?

A mannerism is a gesture, speech pattern, or way of conduct that is characteristic of an individual. These “micro-behaviors” might range from an everyday movement (i.e. clearing the throat) to a very specific tic (i.e. biting nails when nervous). In literature, writers use mannerisms to help enhance physical descriptions and put characters in motion on the page. Consider it another tool in your writer’s toolbox when it comes to character development and depiction.

Character mannerisms are one way in which writers can show, not tell. (This is an old writing adage — if you’d to learn more about it, go here for a complete guide). Here’s an example of the difference it might make:

However, it’s important not to overdo it and bring up a certain quirk time and time again. Let’s talk a bit about some best practices that may be helpful when it comes to writing character mannerisms into a story.

How to write mannerisms in a story

Pro-tip: Don’t tell a reader that your character is stroking his mustache every four pages. Here’s how to make your character’s mannerisms slot seamlessly into a story.

Most importantly, a mannerism has to make sense in the context of the story. When you’re thinking about your character’s idiosyncrasy, consider:

How does a character’s background impact the way that they move? How might the era and setting influence their actions? An Iranian man, for instance, wouldn’t use the thumbs-up gesture anywhere in the world — unless he wanted to insult someone. Then there’s the hero from the 19th-century, who would fiddle with his pocket watch, as men didn’t start regularly wearing wristwatches until the early 20th century.

If you get it right, a character’s mannerisms can speak volumes. J.K. Rowling, for example, employed mannerisms to great effect with Newt Scamander from Fantastic Beasts and Where to Find Them. He hunches, tilts his head down, and goes out of his way to avoid eye contact — conveying to the audience that he’s shy, awkward, and non-threatening. Meanwhile, Captain Jack Sparrow from Pirates of the Caribbean sways even when he’s standing, stumbles over nothing, and slurs: in other words, he’s a drunk pirate, through and through.

Make it add to the story, not distract

Don’t tack on an odd behavior just to up your daily word count. Mannerisms should add to your story — not distract from it. You must be able to justify why you’re writing them into a given scene: whether it’s to reveal character, break up long sequences of dialogue, or advance the conflict.

Most of all, nobody wants to read about a common physical movement, flip the page, and then read about it again. You’ll risk tiring or annoying your audience — not to mention that the forward thrust of your story will suffer as it’s bogged down by irrelevant descriptions of gestures.

So if you notice a character twirling their hair in each chapter, it’s probably time to hit the “Find” button and re-think it. As the adage probably goes, “Everything in moderation — including mannerisms.”

Which contemporary author are you?

Find out which of today's greats is your writerly match. Takes one minute!

Don’t get too cliché 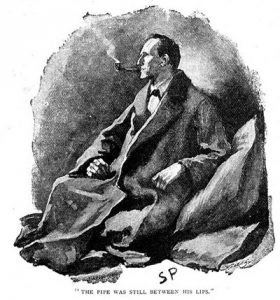 How often do you really wring your hands? Or stroke your chin when you’re deep in thought? Some mannerisms are generally overused in fiction. To go about it realistically, make sure that you don’t rely too much on these cliché gestures and movements.

To think beyond the box, consider how you unconsciously act in certain situations. Yes, this might be tough, which is why we’ve also come up with a resource to help you out.

If you’re struggling to come up with mannerisms for your character, here are over 150 to give you a headstart.

Or: how do your characters talk? What tics do they show in conversation or during a presentation?

Or: how do your characters move? What characteristic things do they do when they’re sitting, standing, or walking?

Or: how does your character interact with their surroundings and external objects?

Mannerisms are here to help

So whatever mannerisms you choose in the end, remember that it should tie into your character’s personality, background, and upbringing. If you follow that route, you won’t stray far from reaching your ultimate goal: the creation of a memorable character.

What memorable mannerisms and tics should be added to this list? Let us know in the comments below

My character interestingly usually ends up standing against a doorframe, revealing his subconscious desire to always have an escape. You could also add: leaning head against windows/doors/glass panes when tired; squinting; crossing and uncrossing legs constantly; hands in lap without moving; prim straight back; and a character who is constantly cracking their neck from side to side.

Wow, that analysis you made about your character always standing against a doorframe was brilliant!

One of my characters always draws her sword when she sits down. She lays it across her lap and traces a rune that is embedded into the handle. It actually makes sense for her to do so, as she wants to be prepared for a fight at all times.

Now that is brilliant!

You left out sucking the tongue with lower lips moving somewhat

Ooh, interesting. What would you say that suggests about the character?

My character chews on the inside of the side of her lower lip, and constantly clasps her hands in front of her so as to avoid over gesturing. Both are mannerisms that show she's working to maintain her control.

My character likes to flick her fingers when she talks showing off one of her quirks: her bright and extremely unnecessary acrylic nails

My character never sits down in a place or with people she doesn't know, instead leaning on a wall or doorway, and whenever she is forced to sit, she always draws a dagger and traces the blade with her fingertip. You could also add crossing and uncrossing ankles continuously, clicking tongue, and picking at lips or fingernails.

My character plays with her ring when she's nervous or anxious (her late father gave it to her as a gift so it reminds her of him and helps her feel safe).

Reading this list, I realized how many tics I have. Constantly shifting weight, always sitting on the edge of my chair, mindlessly peeling labels from bottles, bouncing my leg while sitting, fast walking, swinging my arms as I walk, hooking my thumbs in my pockets, pulling on my lower lip with my teeth, biting my nails, snapping my fingers, covering my mouth while laughing and chewing. Oh my sweet goodness! Am I twitchy book character?

My character obsessively curls her fingers around whatever is in her pockets because she's used to people trying to steal things from her. She also turns actions into little songs to stave off boredom and loneliness.