The difference between dynamic and static characters is the amount they change throughout the novel. A dynamic character in literature experiences important inner growth, changing in a meaningful way by the story’s end. A static character stays the same. For an example of a dynamic vs. a static protagonist in action, look at Ebenezer Scrooge vs. Sherlock Holmes.

Of course, a common piece of criticism you'll hear about fiction is that characters are "too static”: they don’t undergo enough change or growth. Usually, a character has to be dynamic — i.e. has to go on a journey of discovery, changing their personality or attitude in some meaningful way — for readers to wholly invest in them. But that isn’t to say that more static characters don’t also have their place. 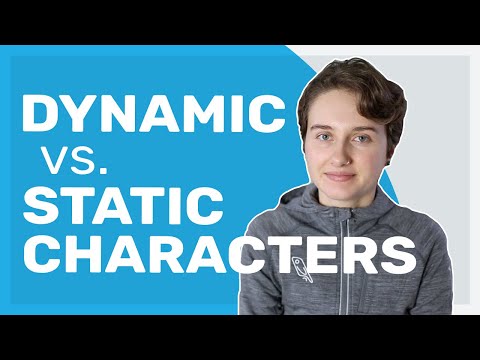 Protagonists are usually (but not always) dynamic

If your protagonist is complex, well-developed, and part of a carefully structured narrative, then they’re probably dynamic. After all, characters who don't change at all typically don't have book-worthy adventures! Which is why lots of the most classic tales of all time feature distinctively dynamic protagonists: Don Quixote, Hamlet, Harry Potter, the list goes on and on.

Interested in developing your own characters to join the ranks of these classic heroes? Our free character profile template can help with that.

Let's consider another example. Christmastime mainstay Ebenezer Scrooge is one of the most famous dynamic characters ever written. In Dickens's novella A Christmas Carol, he starts as a bitter, cold-hearted old miser. But over the course of the narrative, through his interactions with three Christmas spirits, he is gradually redeemed. By the end of the story, he is the picture of yule-time joy: generous, compassionate, and warm.

That’s not to say that great characters can’t be static. One of the most beloved protagonists in mystery history is Sherlock Holmes — and throughout all of Arthur Conan Doyle’s stories, Sherlock remains consistently witty, confident, and eccentric. He faces every conflict with the same attitude and never changes. But why should he change, when readers root for him as he is? Half the charm of the Sherlock Holmes books is the protagonist’s unwavering personality — the other half being his unwavering sidekick, John Watson.

Most antagonists and side characters are static

Speaking of Watson, he’s a prime example of a foil character: a side character whose qualities contrast and accentuate the protagonist's most important personality traits. While Watson is modest, selfless, and pragmatic, Sherlock is confident, selfish, and brilliant. As opposites, they expose each other’s strengths.

The fact that Watson and Sherlock are both static characters is quite rare. In most cases, static foil characters stand opposite dynamic protagonists, highlighting the ways in which they change during the narrative. Since the whole point of a foil character is to be completely unlike the protagonist, it’s pretty common for antagonists to be used as foil characters, and therefore to be static; for example, every Disney villain ever.

Hannibal Lecter is one of the antagonists in Thomas Harris’ The Silence of the Lambs. He doesn’t show any sign of growth during the novel (he’s pretty much always terrifying) and so is considered a static character. As Clarice Starling’s foil, however, he both prompts and accentuates the significant change that she undergoes. In one particularly haunting scene, he prods Clarice into revealing the fears and vulnerabilities rooted in her past, exposing her loss of innocence and highlighting how much she has grown in strength and courage.

Static characters don’t always have such a central role to play in a narrative. Sometimes less important side characters are written “static” simply to make a point or poke fun at a certain type of person. The queen of gentle mockery, Jane Austen, features silly, static side characters in many of her novels. Mr. Collins in Pride and Prejudice, for instance, is a shallow society man who never learns his lesson. His foolish nature contrasts humorously with Elizabeth Bennet's sharp wit — another example of the function of the static character overlapping with the function of the foil character.

Complementary ingredients in a story salad

Static characters can save your book from becoming a running internal monologue.

While static characters can certainly have goals (e.g. solve the case, retrieve the MacGuffin, etc), for a dynamic character, the desire to reach their goal becomes the driving force in a journey of self-discovery. To succeed, they must change in some significant way — and even if they fail, they realize something about themselves in the process. Essentially, your protagonist’s flaws keep them from their goal — and the resolution of these flaws, in order to gain what they desire, creates a dynamic character arc.

Of course, unless your entire book is characters sitting around thinking about self-improvement, these internal conflicts won't always be obvious to the reader — which is why you have to show internal character development externally. One way to do this is by contrasting your protagonist with static side characters and antagonists.

Side note: static characters are just one tool at your disposal for character development. If you're interested in learning more tips and tricks for developing your characters, sign up for our free course below.

In The Great Gatsby, Fitzgerald shows Gatsby’s internal conflict by putting him at odds with Tom Buchanan (a static character). Tom is everything Gatsby aspires to: an old-money WASP married to Daisy. Despite being repeatedly bested by Tom, Gatsby fails to change in a way that might help him achieve his aspirations of bettering his social standing and getting the girl. When he realizes he will never reach his goal, he instead grows increasingly desperate and careless until eventually (spoiler!) he meets his karmic maker.

See, a dynamic character won’t always resolve their flaws and obtain their goals. Sometimes an effort to change will ultimately fail — or a character might even change for the worse. But let’s not get into that now: we’ll delve into all this and more in the next post.