What is your character's archetype?

What is a Foil Character and What Role Do They Play? (With Examples)

In literature, a foil character is someone whose qualities contrast and accentuate the protagonist's most important personality traits. The term originates from an old jeweler's technique of backing gems with foil to make them shine brighter. Likewise, literary foils will reveal something about the main character that readers might not otherwise notice.

What is a foil character? Meet the secondary figures who make your protagonists shine!

In this post, we’ll peel back the layers of foil characters by looking at the roles they can play in storytelling, with plenty of popular examples dotted throughout. So, to pose the question that will carry us through: what does a foil character do? 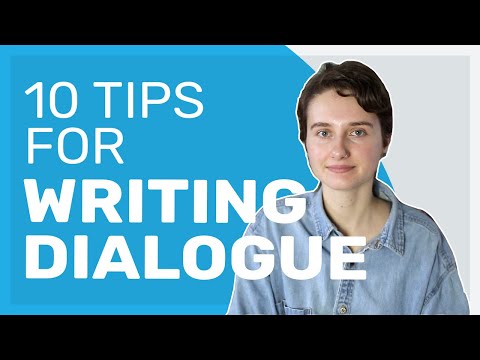 Again, the foil character primarily serves to contrast the main character. To put it analogously, it’s hard to truly appreciate a new bicycle unless you’ve just spent the summer pedaling uphill on a rusty Schwinn. Sure, anyone can guess that the new bike is faster — but only you can tell how smooth the gears are, how light the frame is, and how sensitive the brakes are.

A foil character is like that rusty bike. By giving them traits that oppose your main character, specific aspects of the protagonist become much clearer and make a greater impression on the reader. Here are some common contrasts in different character types: 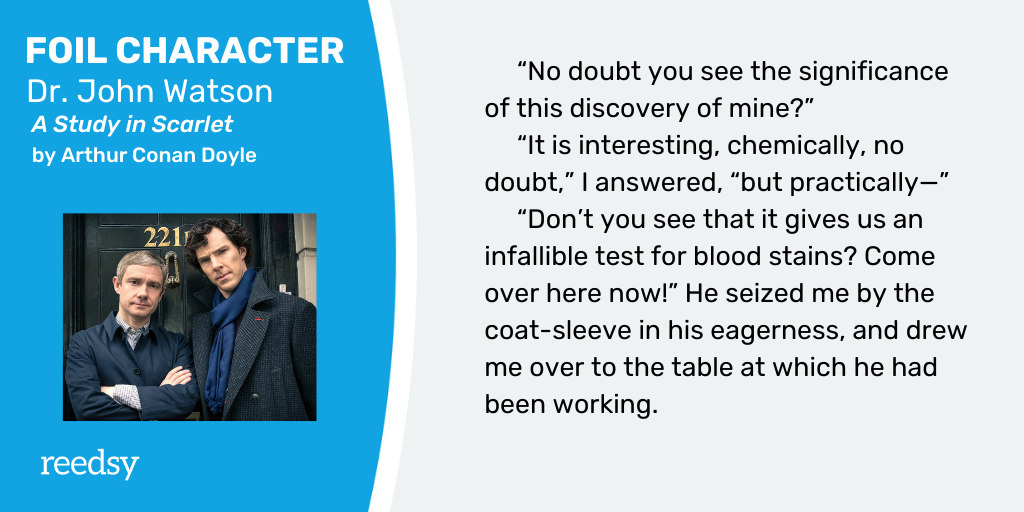 Yet it also elevates Watson, clarifying that his intelligence is nothing to scoff  — as he is a doctor and veteran. The fact that he is consistently impressed by Sherlock’s eccentric solutions only makes Sherlock look more brilliant.

“Curses! Foiled again!” is something a cartoon villain might say after the hero defeats them. While this usage of “foiled” has perhaps contributed to an oversimplified conflation between foils and bad guys, that doesn’t mean that antagonists can’t be foils — and indeed, they often are, especially in stories that develop their characters thoughtfully over time.

To quote another villainous cliché, you will often hear James Bond’s enemies say: “We’re not so different, you and I.” It’s certainly true that protagonists and antagonists are often two sides of the same coin — characters with similar backgrounds or circumstances but with very different approaches or philosophies. By pitting these characters directly against each other, the narrative can’t help but emphasize their contrasting qualities. 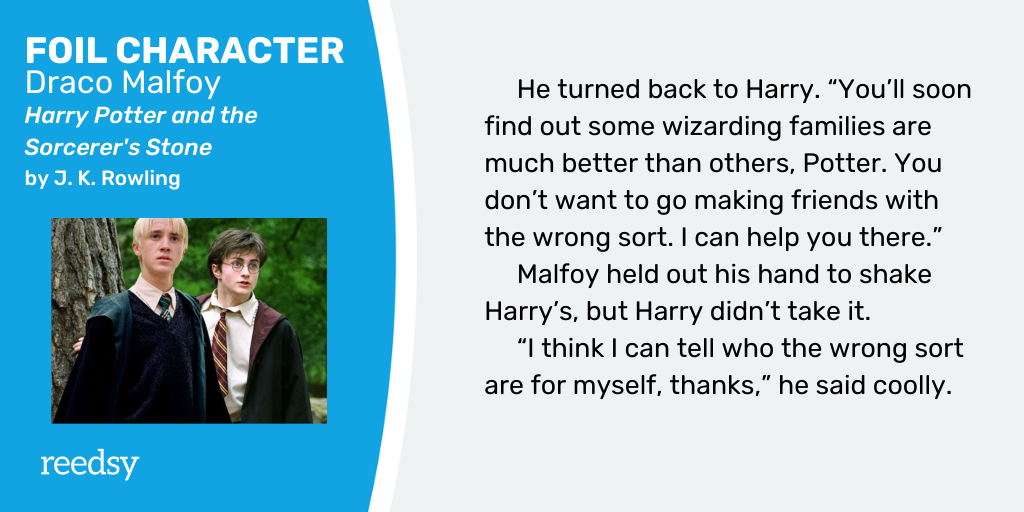 Hogwarts classmates Harry and Malfoy are, in some ways, remarkably similar. They’re both smart, ambitious leaders (Harry was almost sorted into Slytherin for this very reason!) who are regarded as “high status” figures within the Hogwarts hierarchy — Harry because of his celebrity status in the wizarding world, Malfoy as the scion of a wealthy clan.

These similarities make them inclined to occupy similar positions and roles at Hogwarts, which naturally leads to conflict. And it’s within these conflicts that their differences become evident… and all the more remarkable given their similarities. Most notably, in comparison to Malfoy’s selfish, conniving use of his wealth and status to belittle and control others, Harry’s genuine compassion for his fellow students shines even brighter.

When a story takes place outside a reader’s immediate culture or community, they require a bit of context to understand if a character is behaving “outside the norm”. For example, if you were writing a Western and wanted contemporary readers to understand that your main character is more reticent than most protagonists of the genre, you might give him a band of whooping, confident cowboy brothers for context.

In other words, by deploying a foil character, you help the reader understand just how unusual the protagonist’s mindset and attitudes are — for that era, genre, or overall culture. Needless to say, this won’t apply to all stories, but it can be handy to use foil characters this way when writing something like a period piece or out-of-this-world science fiction! 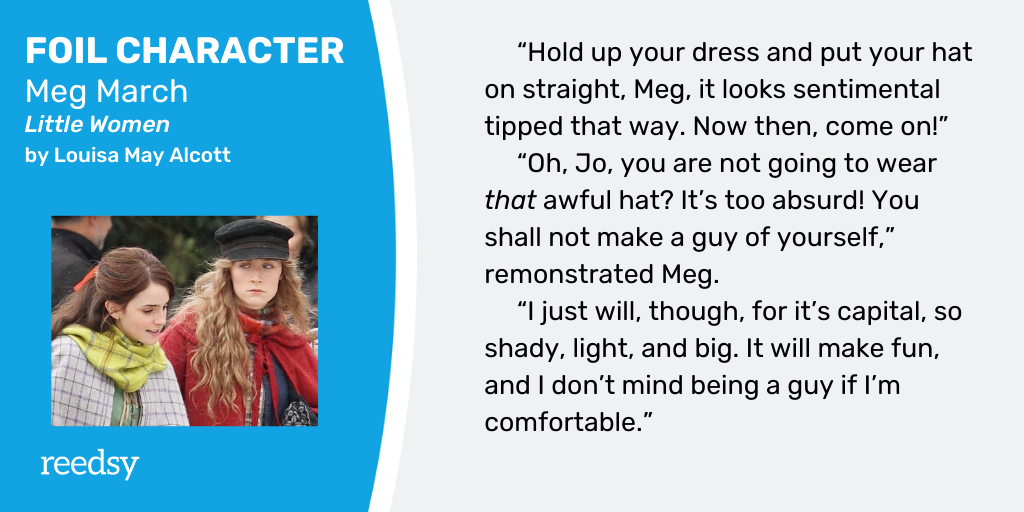 Though not historical fiction when it was published, Louisa May Alcott’s Little Women employs foil characters in a manner that, today, clearly demonstrates expectations for women at the time. And while all the girls act as foils to one another, the strongest contrast exists between Meg, who is traditional and rational, and Jo, who is tomboyish and impulsive.

From the start of the book, there is a social emphasis on pragmatism and conventionality: though both Meg and Jo work to make money, they do so by teaching and caring for others (typical “female” pursuits). And while Meg dislikes the family she works for, she does love children — and she happily aligns with social conventions of the time, as seen in her later marriage to John Brooke and her children with him.

Jo, on the other hand, loathes caring for her Aunt March and decries marriage. Instead, she pursues her writing dreams and even rejects a cushy proposal from her best friend, Laurie, because she does not want to be tied down. These actions set her indisputably apart from Meg and most women of the era; in this manner, Alcott shows Jo to be truly unique.

Imagine a princess — a future queen-in-training — who is bound by royal responsibilities and obligations yet has had a strong desire for independence her whole life. Then imagine the princess’s foil: her mother, the long-serving queen who tries to convince her daughter to take her duties more seriously.

Of course, this vastly increases the princess’s internal conflict. Should she steal away one night and finally be free, or remain loyal and devoted to her kingdom as its future ruler? The first option sounds pretty appealing, yes — but then again, wouldn’t her mother be disappointed? 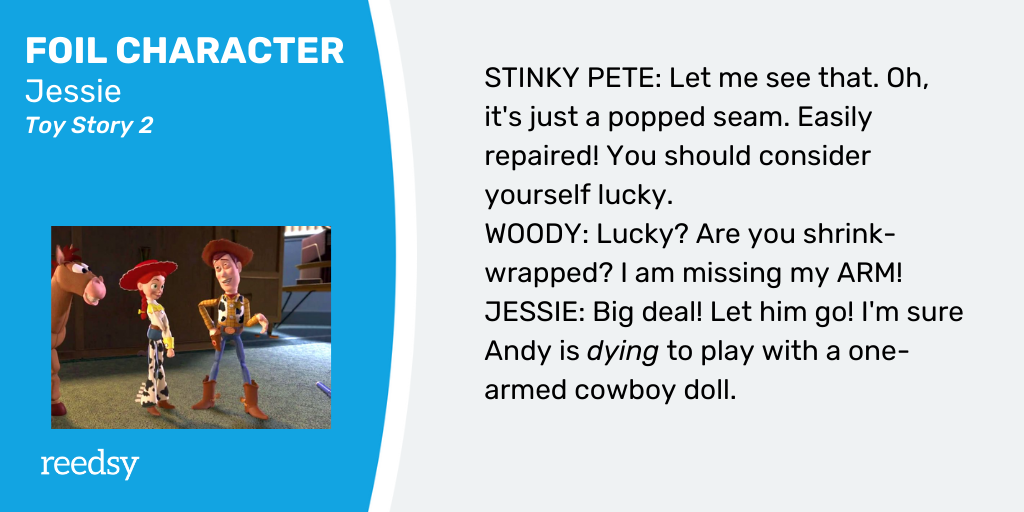 In Toy Story 2, Woody is confronted by the reality that his “child”, Andy, will eventually grow up and leave him behind. At first, he rejects the idea — until he meets Jessie, a cowgirl doll who belongs to his range of TV tie-in toys. Tragically abandoned by her own child, Jessie has chosen to avoid future pain by living out her days in a toy museum… a life Woody can also have if he chooses.

As a foil, Jessie puts Woody’s defining quality — his love and loyalty for Andy, as well as the other toys back at Andy’s house — to the test. This internal conflict is expertly shown through Woody’s expressions and subtle comments to the other toys, and in outright external conflict with Jessie, as in their fight when Woody is trying to retrieve his broken arm and escape.

Providing an environment for the hero to react to

Ever felt like you just don’t fit in with your surroundings? Maybe you’ve worked a corporate job in a big city, when all your free-spirited inner self wanted was to get out and explore. No doubt you felt completely out of place against the high-rise towers, surrounded only by people in gray suits.

More often than not, a foil takes the form of another character in a novel or story. However, symbolic objects and settings can serve the same purpose! When a protagonist appears or just feels “wrong” in a particular setting, their defining traits become all the more prominent and significant — and if the clash is strong enough, may even affect the story’s outcome.

Example of setting as a foil: Madame Bovary

In Gustave Flaubert’s Madame Bovary, Emma yearns for a more exciting and luxurious life than the French countryside can offer her. Her desires for wealth and beauty contrast sharply with the realities of her provincial life. The friction between Emma and her rural setting is what drives the novel forward — with Emma gathering huge amounts of debts as she lives far beyond her means, eventually leading to her suicide.

Remember, standout characters are crucial to capturing readers’ curiosity. Foil characters, in particular, open the door to complex character exploration. Whichever approach you take, do it purposefully and with plenty of thought about what you want readers to take away!

Interested in other ways to add intrigue to your characters? Check out our posts on character development, character profiles, and our one-of-a-kind character questionnaire.

What is your character's archetype?