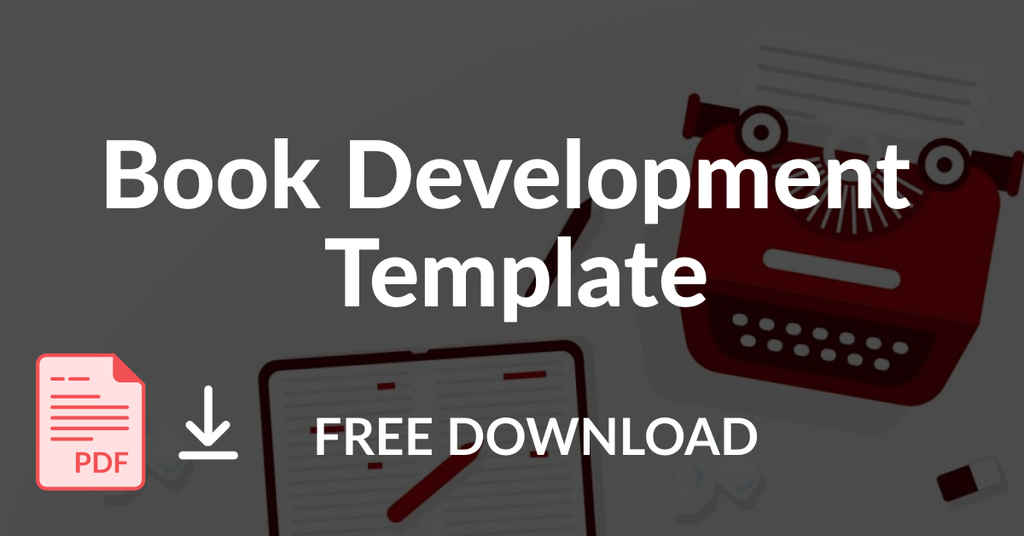 Turn your book idea into a writing outline

Our template will let you start writing your book with full-fledged confidence today.

All the best books start life as great book ideas. For some, inspiration strikes during a morning shower. For others, creative writing is a more deliberate process. Even some of the most experienced authors write their best stories from writing prompts — or use other writers’ tried-and-true strategies to gather book ideas from the world around them.

The bottom line is: there’s no right way to get inspired. If you’re ready to kick writer’s block to the curb and start writing your novel, here are 50 fresh book ideas ripe and ready for writing — and 10 ways to come up with even more! 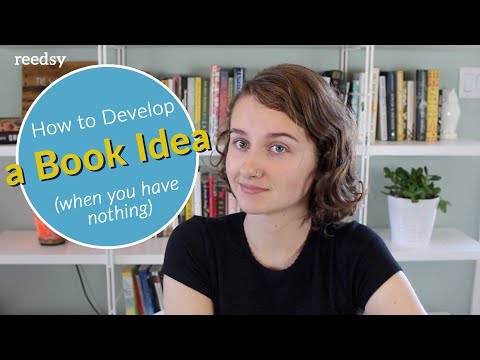 If you’re searching for book ideas to get started with creative writing, there’s no better place to start than with Reedsy’s plot generator. It asks only that you choose your genre, then randomly supplies a protagonist, a secondary character, a plot, and a twist! For example, if you generate a plot for a romance novel, it might look something like this: 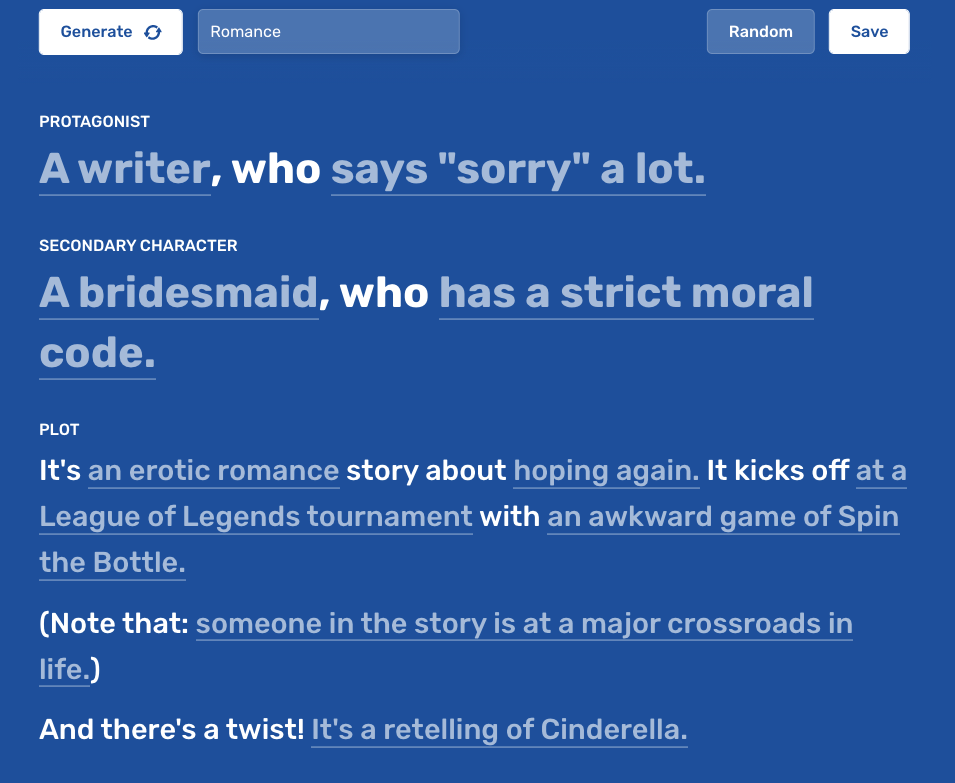 You can lock in any elements you like and keep regenerating the rest until you hit upon the perfect combination. Here are a few more amazing plot ideas courtesy of our generator:

With all the major elements sorted, you can then use a story structure like “The Hero’s Journey” or “Save the Cat” to outline your entire book. At that point, there’ll be nothing stopping you from plowing ahead!

Get the idea out of your head and onto the page, by learning how to actually start writing a book.

Allow a short story to blossom

Many esteemed authors, including Sylvia Plath and Stephen King, began their careers by writing short stories before eventually “graduating” to novels. But this evolution needn’t take years. Sometimes, a character leaps off the page, you suddenly begin in the thick of rising action, or a denouement leaves you craving more, and what started as a short story unfolds into 50,000 words or more.

Need a jumping-off point? We’ve got you covered with our lovingly curated list of over 200 short story ideas. Here are a few to whet your appetite:

With so many book ideas at your fingertips, the difficulty often lies in picking one to run with (and sticking with it). The indecisive author needs something to spur them on — and that’s where Reedsy’s weekly writing contest comes in.

Give yourself a ticking clock

Each week, five nuggets of inspiration are delivered straight to your inbox. If a prompt takes your fancy, you have a week to write a short story, which you then pass under the noses of your fellow authors and Reedsy’s panel of judges. So not only are you getting your creative juices flowing, but you’re also taking those ideas for a test run with a ready-made pool of beta readers.

Curated writing inspiration delivered to your inbox each week.

Of course, if you’d rather choose from an all-you-can-eat buffet of book ideas, then you can fill your plate from prompts contests past.

Explore (and exploit) the public domain

Many of us are wary of mining our reading material for book ideas, in case we stumble into the black pit of plagiarism. But lots of authors have found success working with other people’s material — no strings attached.

One way to do this is to revive stories in the public domain. Whether you turn to Greco-Roman myth, Shakespearean tragedies, or a modern classic like Mrs Dalloway, books that have fallen out of copyright contain hundreds of vivid characters and rich plots — all of them up for grabs and ripe for rewriting. Here are a few ideas to chew on:

On top of reading widely, reading the giants of your genre to familiarize yourself with common tropes is another important part of ‘author training.’ Authors of certain genres, such as romance and fantasy, who fail to include a single trope in their novel chance losing readers who have come to expect specific conventions. Too many tropes, and you risk reader déjà vu.

You can strike the right balance by acquainting yourself with popular tropes, then learning how to revitalize them to make an original book idea. Simple twists like these might be all you need to find a fresh angle on the kind of stories you love to read:

Let your protagonist lead the way

Once you have a character in mind, digging into who they really are is a great way to develop your book idea. If you aren’t familiar with character profiles, check out this guide to learn more. But in a nutshell, a character profile helps you build a holistic picture of your character, including their physical appearance, backstory, and psychology. Once you know all that, figuring out what they might do in a novel should be a piece of cake.

Here are a few character-related questions that may be especially useful in terms of finding a strong book idea:

Take inspiration from a muse

Many bestselling authors have found inspiration in works of art. Tracy Chevalier, for example, built her brand around historical novels that take a behind-the-scenes peek at iconic paintings. Of course, your book idea doesn’t need to feature a work of art or its artist: musing over a painting by asking, “who is that person, and what are they doing there?” can also be a fun way to generate book ideas.

Alternatively, if paintings aren’t successful at coaxing out your muse, why not immerse yourself in music, watch a beautiful dance, admire your city’s architecture, or even soak up the mood, setting, and visuals of a film. Let’s take a look at a few examples to get the ball rolling:

Check out this list of creative writing examples for more inspiration!

Get creative with journaling

Armed with all the books, music, and art in the world, you may still find that your staunchest ally when it comes to inspiration is yourself. The notion of writing in a journal usually conjures up visions of high schoolers twirling fluffing pencils and scribbling, “Dear Diary.” Still, studies have shown that journaling is a great way to nurture your creativity.

There’s no one way to journal, so try to think outside the box. Here are a few examples that should set a-whirring the right cogs in your brain:

Opening with an event from the middle or end of your day challenges you to think creatively about structure — an often overlooked element of storytelling that might just hold the key to your next great book idea.

If you wanted to get something off your chest or initiate a conversation with a stranger, but you didn’t have the courage, then put it to paper and see where your imagination takes you — hopefully to your next book idea!

Add a fictional twist to your journaling and look at it as a form of narrative storytelling rather than a laundry list of events. This will make it much easier to find inspiration in the mundane.

Get to know yourself better with questions like, “Do I have a secret hunch about how I’ll die?” or “What would constitute my perfect day?”. These might unearth a creative gem you didn’t know you had within you.

Photographs have an unmatched ability to unearth buried memories — perhaps even those faded, vintage memories that contain the settings, characters, events, or emotions of your next book idea. 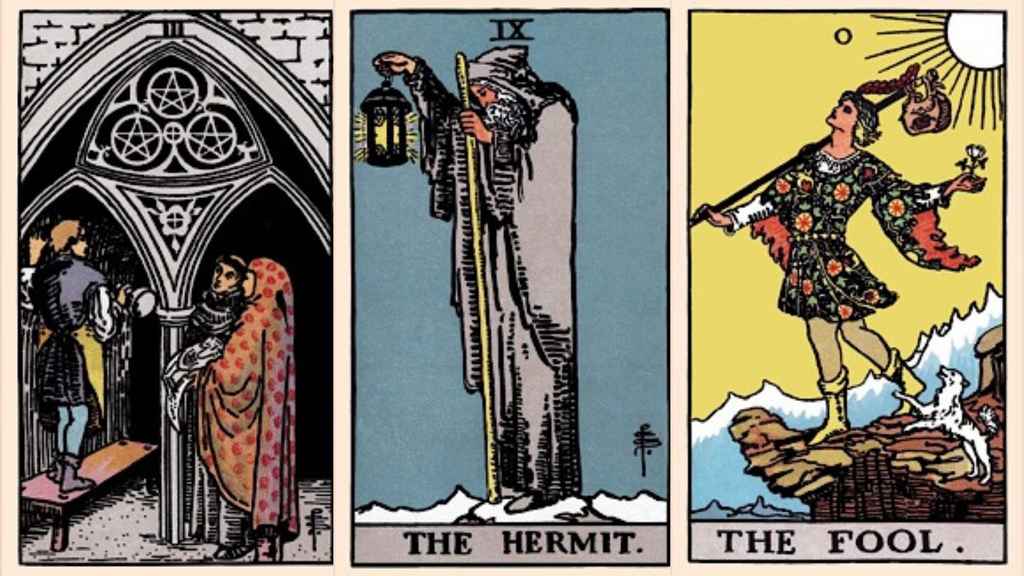 Is your present-day life remarkably uninspiring? Why not take a peek into your future? Using either a deck of tarot cards or a tarot app, draw three cards at random and weave them into a story. You can research traditional tarot symbolism if you like but it’s also fine to make your own associations, drawing on how the images make you feel. You don’t need to be a fortune-teller to use tarot cards, just a storyteller!

Be a fly on the wall

When you’re on the hunt for a book idea, society gives you a free pass to indulge in a bit of eavesdropping — and if you pay close enough attention, you’re bound to find the seed of an idea. But if you’ve been keeping your ears peeled and only tuning in to boring conversations, then it might be time to head to TED.com, where some of the most interesting people in the world speak on everything and anything from business, to activism, to personal growth. Here are few book ideas inspired by our favorite TED talks:

Looking for something a little less high brow? Try listening to a chatty podcast, or ‘eavesdropping’ on an agony aunt. You’ll find more lurid, heartbreaking, and dramatic material in the pages of Dear Prudence and Ask Polly than you’ll know what to do with.

For a true window into the lives of others, you can’t do much better than Craigslist.com: the infamous classified advertisements site. If you browse through its sprawling pages for long enough, it’s hard not to come across something intriguing that would work as a plot point or the setting of a story.

You really have to see the site for yourself to appreciate its potential, but here are a few examples to give you a flavor:

Whatever you’re in the market for, from mysteries to social commentary to meet-cutes, Craigslist has got you covered.

Once you’ve found your idea, take just one more step before diving headlong into your novel and check out this guide to planning. Yes, discovery writers too! No matter how you write, you’ll find many universal tips in that post that will help you form a solid foundation for your next writing endeavor. Good luck!

5 Writing Techniques Every Writer Should Try on for Size

Looking for some fresh writing techniques to build your skills or help you push through writer’s block? Here are 5 that you can apply to anything you’re working on. Try them on for size!

Turn your book idea into a writing outline

Our template will let you start writing your book with full-fledged confidence today.