Rising Action: Where the Story Really Happens (With Examples)

Rising action is everything in a story that occurs after the inciting incident but before the climax, forming the bulk of the narrative. This involves the development of the protagonist’s internal and external conflicts, a primary conflict that comes to the forefront, obstacles they must overcome, and a “boiling point” that triggers the climax.

In other words, rising action is the engine that powers almost every story. You simply can’t follow any kind of established story structure without it… but that doesn’t mean it’s easy to write! Luckily, this guide will better acquaint you with this crucial story element: you’ll see exactly what should happen during the rising action, with the help of some sweet examples. 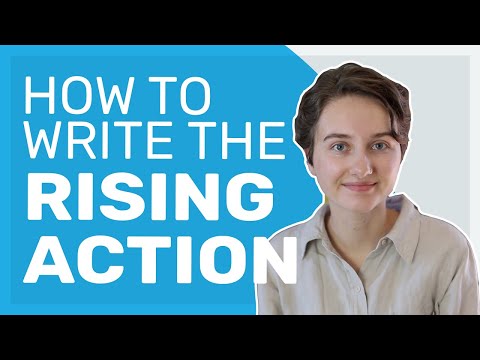 Delivering on “the promise of the premise”

First and foremost, let’s talk a bit more about what the rising action accomplishes. It tells the story, yes — but on an emotional level, it also delivers on “the promise of the premise”, which is the story that readers expect.

In a mystery novel, the rising action would be the detective trying to crack the case. In a romance, it’s the main characters falling in love. If a purported mystery features no actual mystery and an alleged romance novel has very little romance, then the writer has not delivered on the promise of the premise — or the book has been marketed very badly.

As a result, rising action is often influenced by a story’s genre or subgenre. Before you begin writing yours, it’s worth familiarizing yourself with what readers in your genre expect. (And make sure that whoever writes your blurb doesn’t grievously misrepresent your book!)

Examples of “the promise of the premise”

Now let’s dive into our sweet examples. To show how rising action manifests in different genres, we’ll look at two extremely different stories throughout this post: one a literary fiction classic, one a contemporary heist comedy.

Everything you need to know about the real hero of every story — rising action!

Where internal and external conflicts develop

Just about every story is fundamentally about characters dealing with conflict. Specifically, they must contend with two types of conflict:

A strong rising action sequence develops both these types of conflicts, ideally with multiple occurrences of each. For example, if you’re writing that mystery and your protagonist is hunting down a serial killer, his conflict with the unseen enemy must grow as the killer evades his capture (external conflict). He’ll likely clash with the police force and the community too, as people grow frustrated with his lack of results (more external conflict).

And of course, the best kinds of internal conflicts feed into external ones, and vice-versa: the longer it takes to catch the killer, the more confidence your protagonist loses, the less the town believes in him, the more he drinks, and so on.

Examples of internal and external conflict

The internal and external conflicts can (and should) intertwine

Typically within the first act, the primary conflict takes hold; this is usually a combination of external and internal conflict. (Say, a corrupt ruler kills the hero’s parents and they must overcome their grief to defeat this villain and avenge their family.) The primary conflict will be the foundation of the rising action from here on out.

Here are the primary conflicts from our examples:

Protagonists are tested by roadblocks

Roadblocks are concrete crises or circumstances that prevent the hero from moving forward toward their objective: for example, they might lose all their money, get knocked out in a fight, or find themselves lost in a jungle. Often the clock is ticking against them, and the less time they have to reach the finish line, the greater the stakes become in terms of roadblocks.

For example, if you were writing a romance where your protagonist is trying to impress her crush, she might have a number of escalating difficulties. First, she might trip and embarrass herself. Then she might accidentally buy her romantic interest a cup of coffee with the wrong kind of milk, causing an allergic reaction. Finally, against all odds, they go on a date — only for your heroine to accidentally lock herself in the bathroom with no escape!

Of course, roadblocks should feed into the development of the story and main character(s). In our romance example, perhaps it’s only after embarrassing herself so many times that your heroine realizes she can’t let shame get the better of her, and that it’s only through embracing herself — blunders and all — that she’ll find enduring love.

Examples of roadblocks testing their characters

Again, the protagonist’s key qualities are revealed as they deal with these challenges. In The Great Gatsby, we see Gatsby grow increasingly anxious as he realizes that maintaining an affair is no easy thing — especially because, no matter how lovely Daisy is, she cannot live up to his expectations. Meanwhile, in Ocean's Eight, we see Debbie stay cool and collected as she tackles each problem, her own confidence instilling the same in her team.

Subplots and side characters will come into their own

Constantly ratcheting, utterly unmitigated tension would be pretty intense to read, right? Thankfully, most stories aren’t just one roadblock and/or personal conflict right after the other — they involve a balanced cycle of tension and release.

Each crisis might be bigger than the last, but there’s always that bit of respite in between periods: a little comic relief, a B-story, or a quiet moment between two characters. Even in an action-packed sword-and-sorcery fantasy novel, your hero wouldn’t be fighting dragons and rival knights every waking moment — he’d also take some time to recover at the local inn or to share a sweet romantic moment with the princess.

This give-and-take of tension and relief is a huge factor in any story’s pacing. If your story has too many “rests”, the slow pace will send your audience to sleep; conversely, if it’s 100% action, it will leave people confused. Needless to say, well-paced rising action involves both big, dramatic moments of tension and “smaller” moments of relief.

Keep in mind that even such calm or comic moments should serve a greater purpose besides pacing. In The Great Gatsby, important background about Gatsby and Daisy is revealed during those seemingly innocuous posh lunches and gossip sessions. And in Ocean’s Eight, each comic scene adds subtly to our understanding of the characters: Debbie and Lou are creatively strategic, Constance is really just a scrappy kid, etc.

Finally, the plot will reach a boiling point

The boiling point is the final stage of the rising action — arriving just before the climax, at which point the story actually “boils over”.

To clarify, the boiling point is not the climax itself, but the final incident (or sequence of incidents) that triggers the climax. After this, the rising action (which was always “rising” to the climactic scene, after all!) is over, the climax occurs, and the falling action and denouement follow.

We get it — rising action does (almost) everything!

But what supports the rising action?

Sure, rising action is the background machinery of every piece of media that you consume, but it doesn’t achieve this alone. Every story structure also has a set-up that precedes the rising action, then the climax, falling action, and resolution, without which you’d certainly be left wanting more.

Interested in learning more about the inner workings of your favorite stories? Check out our comprehensive guides for everything you need to know.