Part 3 – How to Create Conflict

Internal vs External Conflict: How Conflict Drives a Story

Conflict is the backbone of storytelling. As Kurt Vonnegut once said, “every story is about a character who gets into trouble and then tries to get out of it”. Without something to rub up against, a story isn’t a story — it’s just a series of events without stakes. As a literary concept, you could express conflict as a simple formula:

The protagonist in a story always wants something, but something else is stopping them from getting it. This interaction between the character, their wants, and their obstacles is what drives every story. If that central conflict is boring or nonsensical, the plot will be dull and confusing. But if the conflict is compelling, logical, and emotionally impactful, readers will be desperate to know how it all pans out. 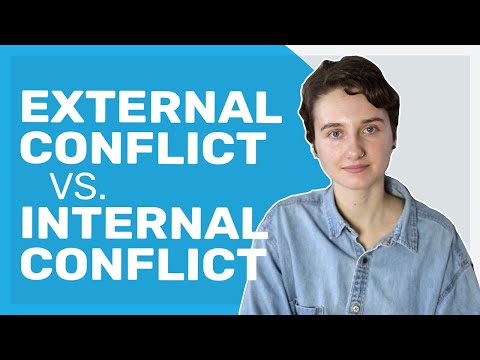 In this short series of articles, we’ll dive further into this formula and reveal the most common types of conflict in literature. And if you’re a writer, we’ll even show you a simple method for identifying the true conflict that lies at the heart of any story you’re writing.

But first, let’s look at the two broad categories into which all types of literary conflict belong.

Internal vs External Conflict: Why stories shouldn't have one without the other.

External conflict is the struggle between characters and the outside forces that are preventing them from getting what they want. This type of conflict is usually interpersonal or societal. That is, they either occur on a larger, systemic scale between groups of people, or they occur on a smaller scale, between individuals.

Something to fight against

External conflict can provide the raison d’etre for the story — the resistance that forces the character to make changes in order to achieve what they want. It is also often connected to the main theme or argument that the author wants to present.

Several clear examples of external conflict can be found in George R.R. Martin’s A Game of Thrones. In fact, it wouldn’t be an exaggeration to claim that external conflict(s) are the very backbone of the first book of the series (and what is to come), with plenty of scheming, plotting, and backstabbing.

In A Game of Thrones, the external conflict is mainly represented by the various characters who all want the same thing: power. Because power, i.e. sitting on the iron throne, can only fall into the hands of one person, their desires clash, inciting murder and betrayal.

External conflict is also manifested in individual characters, like Ned Stark — an upstanding and honest man who has been selected to serve as the Hand of the King. Unlike most of the other players, he doesn’t crave power but instead values honor and duty. In his quest to uphold his duty, he faces many obstacles, such as:

Without these external conflicts, there would be a throne but no game, and certainly no story.

On a more subtle level, in Daniel Defoe’s Robinson Crusoe, the eponymous hero faces a conflict of survival when he is shipwrecked on a deserted island. Exposed to the fickle nature (pun intended) of Mother Earth, he wants to survive and leave the island, but must learn to weather storms and unknown threats if there’s to be any hope of rescue.

Need help sharpening the conflict in your story?

Internal conflict is the struggle between emotions, values, or desires within a character that are preventing them from achieving their desired goal. These conflicts may originate from any combination of the character’s expectations, desires, duties, and fears. And though they may also arise because of external conditions where the character needs to make a choice, they are, in the end, fundamentally not about those external forces but about the battle that goes on inside a character's heart and mind.

A gripping inner conflict is often morally complex or universal, and that’s what will ultimately resonate with your readers. It is also often a central part of establishing a character arc.

In Suzanne Collins’s The Hunger Games, Katniss is torn between her reluctance to kill another human being and her need to survive in the arena.

In Mario Puzo’s The Godfather, Michael Corleone wants to stay out of the family business but cannot resist the pull of filial obligation.

Lastly, in Vladimir Nabakov’s Lolita, controversial for its portrayal of a pedophile’s perspective, Humbert Humbert struggles with his desires towards a child — something he knows to be immoral.

If you’re curious to learn more about different types of conflict, head straight to our post on “7 Types of Conflict in Literature” for a more in-depth examination.

Do stories need both internal and external conflict?

The short answer is no — a story doesn’t need to include both internal and external conflict. But they often do because it can bring a certain level of complexity and nuance to a story.

One example where there’s little-to-no internal conflict is Sherlock Holmes. Self-doubt doesn’t seem to be in the detective’s vocabulary and he is never really torn between his wants and desires as his only motivation is solving the mystery. The external mystery is thus where the most conflict stems from.

This type of storytelling, where the main character feels little compulsion to change, is rare. Over a century after Holmes last hung up his deer-stalker, this idea of a protagonist with zero introspection is often called a "Mary Sue" — an overly idealized character that is unrealistically free of flaws and weaknesses. Because they are so perfect, there is never any threat of a Mary Sue changing over the course of a plot.

In the movie Philadelphia, Denzel Washington plays Joe, a lawyer who must overcome his homophobia in order to win the case for a man (Tom Hanks) who believes he has been wrongfully fired on account of having AIDS. The external conflicts are represented by:

Both Joe and Andrew harbor prejudices against one another, but they must learn to trust each other and work together if they’re to win the case. This requires resolving their own internal conflicts.

With this introduction to conflict, you should now have a better understanding of what internal and external forces a character must overcome before they can get what they want. If you’re ready to take a deeper dive, check out the next post in this series, in which we break down seven common types of conflict in literature.