Part 1 – Parts of a Book: Overview 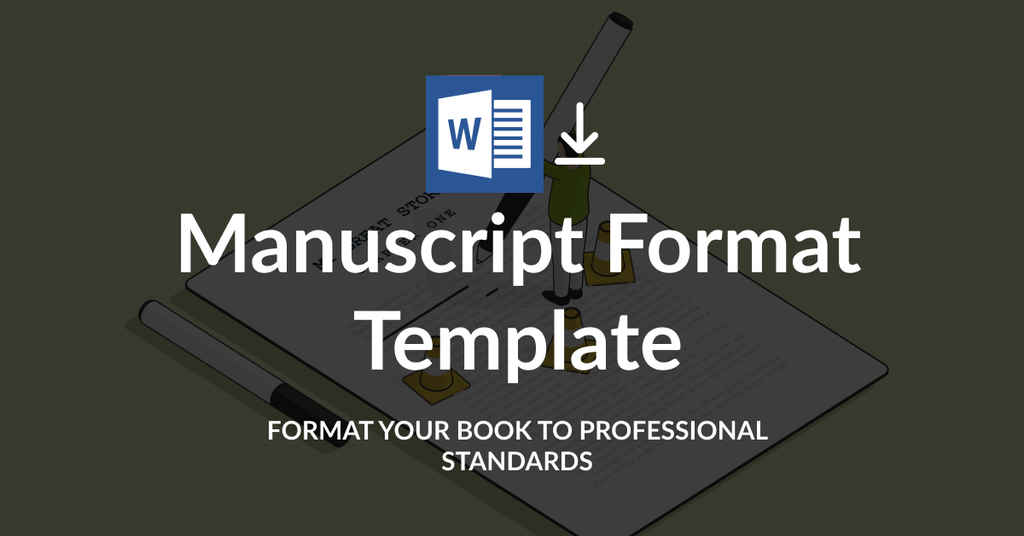 The simplest way to format your manuscript to industry standards.

What is an Epilogue: Four Powerful Tips for Writers

An epilogue is a section of writing at the end of a book that takes place outside of the setting, perspective, or frame of the story. It’s often intended to provide closure and resolution by explaining what happens after the main narrative arc has come to an end. As it’s in the main body of the text, the epilogue is still part of the story.

What is an epilogue? Your guide to the end-y bit of a book

It’s also one of those literary devices whose necessity is often debated — along with its cousin, the prologue, which stands on the other side of the book. If you write a strong ending to a story, should there really be anything left to say? Well, like a good digestif, an epilogue can serve as a satisfying close to a story — one that gives you a moment to reflect on everything you just consumed. It shouldn’t replace the novel's ending but merely provide a grace note for the story to close on. 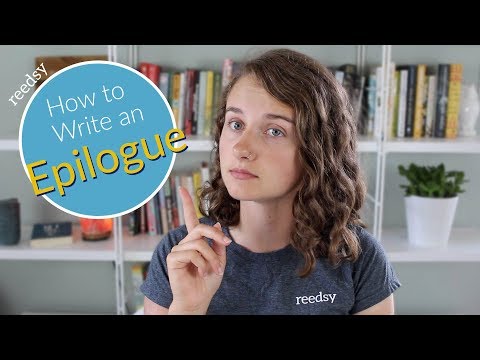 In this article, we’ll get our hands dirty and reveal everything you need to know about epilogues, including examples and tips for writing them, courtesy of some of Reedsy’s top editors. Just be warned — there will be spoilers aplenty. But first, let’s kick things off with a crucial distinction...

Often mistaken for the afterword

Epilogues and afterwords are commonly confused — likely on account of how they might both appear at the end of a book’s body.

An epilogue ties up loose ends that require resolving and could not be tidied up within the main part of the narrative. It’s a part of the larger story.

Wondering whether your story should include an epilogue?

Provides cathartic release at the end of a story

An epilogue might allude to what happens after the story’s end, which can be particularly satisfying if the lead-up has been full of suspense — like, editor Lourdes Venard puts it: “if the characters have faced dangers or an upheaval to their life.” This doesn’t mean you have to wrap the story up with a Happily-Ever-After bow — just give the reader a chance to let go of the breath they’d been holding during your high-stakes finale.

In this sense, an epilogue provides a glimpse of the world and the book's characters once the dust has settled. Such an epilogue doesn’t have to give answers and even much in terms of clarity, but it can end the story with a powerful suggestion of the continued existence of this fictional world.

The chaotic end of Moby Dick involves the long-awaited encounter of Captain Ahab and the whale, and the sinking of a ship, to boot! In the epilogue, Ishmael (our narrator and a sailor on said ship) survives by floating on a coffin. He reminds us that it is this providential yet ironic buoy that has allowed him to recount the story we’ve been reading all along.

Top tip: A book should work without the epilogue

Not all stories need an epilogue, and there is often much to be gained by ending on a high or leaving the ending open to the reader’s imagination. As such, a rule of thumb is that an epilogue should always be an added bonus, not a necessary ingredient. The denouement of the main narrative should be strong enough to tie the story together on its own, without the extra embellishment. Just think of the word epilogue itself to remember this point, advises Oxford University Press editor Hannah Hirst-Dunton:

“The prefix 'epi-' means 'added' or 'next to' — when labelling text as an epilogue, you should definitely bear that in mind!”

Classic Greek and Elizabethan plays often include epilogues to explain the fates of the characters. An actor would step forward and speak directly to the audience, offering commentary on the story and dispensing morals, if any were found in the tale. This still remains a popular literary device for authors, though it’s no longer a direct commentary.

Ideally, readers will grow invested in the characters that you’ve so carefully created — and if they do, they’ll want to know that the characters are okay in the end. Even if they’re not okay, enthusiastic readers still want to understand the characters’ fate within the story's scope.

Epilogues often do this by providing a glimpse into the characters’ lives after the end. However, a powerful epilogue won't just tell us where the characters are working ten years later and whether they got married in the end. It should also show us that this is the culmination of the development that the story has taken them through.

The final installment of the Hunger Games series features an epilogue set 20 years after the main events of the novel. It reveals how the Games and the successful rebellion have affected Katniss and Panem, which has seen the election of a new president and the abolition of the Hunger Games.

Katniss is married to Peeta and the mother of two children, but she suffers from nightmares and grieves for the loved ones that she lost. This epilogue shows that while time heals many wounds, it doesn’t always happen in a linear manner. And while we see that Katniss still struggles with persistent terror that her life is about to be upheaved, there’s also hope that she’ll continue to heal and search for rays of light despite the darkness.

Now, while your story should be strong enough to stand on its own, the epilogue can be the cherry on top for many readers. But as with all cherries you put on top of a sundae, it’s more precious if there’s only one! In other words, as editor Allister Thompson puts it:

“If there’s nothing else to say, don’t be tempted to say it!”

Remember, the main plot has been resolved before the epilogue, so you only want to dole out information to add further depth. You could go on explaining exactly where all of your characters are 10 years into the future, but if this doesn’t contribute to the reader’s understanding of the story, characters, or their world — leave it be.

The best sense a writer can give a reader at the end of a book is that the story lives on — that the characters and their lives are so rich, you can’t help but imagine what paths they take after the last page is finished. Tacking an info-dumping epilogue onto an already substantial ending can set your readers up for an anticlimactic letdown, so don’t use an epilogue to tie a knot on every single thread of your story; leave a few loose so that we can come back to them and continue to imagine where they lead later. Ask yourself how the information in the epilogue ties into your story and themes and cut away the excess.

Puts a bow on the story's central theme

This is a tricky one. You don’t want to hit your readers over the head with your novel’s theme, but sometimes an epilogue can provide one last perspective on it, whether that be from another time, setting, or point of view. Be careful not to break the tone or pacing of the novel too much with this approach, or the epilogue will end up sounding like the intro of a new story rather than the closing of the current one. Just give your readers one final thought to chew on.

The epilogue of The Handmaid’s Tale is a transcript of a symposium recorded 200 years after the story has ended, which is being held to discuss the story of the narrator, Offred. Here, the fictional events of the novel become a topic of discussion with references to moral relativism, and the final line — “Are there any questions?” — invites the reader to reflect on their own perception of the subject.

Since the time of Greek tragedies, the epilogue has naturally evolved. Today, the tell-all kind of wrap-up is very rarely used in novels. It's seen as "spoon-feeding" the reader and implies a lack of trust between the novelist and the reader or between the writer and their own ending.

Think of it this way: “The End” is a closing line that might work in fairytales, but in a full-length novel, putting such a firm note of finality on your story can be an unpleasant break in the fourth wall. Similarly, highlighting your theme too adamantly, especially at the end, can remind the reader of you as an author and bring them out of the story because it makes it sound like, “Hey, I just wanted to make sure you got what I was getting at.” Trust that you’ve already delivered your message.

Sets up a sequel with a sly teaser

After the narrative arc has finished, authors will sometimes add an epilogue that provides a little nudge-nudge, wink-wink towards upcoming events in the characters’ lives — letting readers know that this isn’t the last they’ll see of this realm. This kind of epilogue is a great way to keep readers on the hook for a series and often involves a gasp-inducing plot twist.

Example: The Girl With the Dragon Tattoo by Stieg Larsson

By the end of The Girl With The Dragon Tattoo, the central mystery has been firmly tied up, but no one has been charged with a crime. In the epilogue, this is rectified as Blomkvist and Millennium publish an exposé piece that blows up, setting the Swedish stock exchange into disarray as the accusations in the article are proven to be true. Shortly after, Blomkvist also publishes a 600+ page book about the antagonist, Wennerström, and his dealings. Wennerström himself is nowhere to be found until he turns up dead in Spain, thanks to Salander’s clues.

In the epilogue, the relationship between the protagonists, Salander and Blomkvist, is pointedly left on an unresolved, hanging note — and it’s this lingering question about their future that propels us towards book two.

Before you start setting up a sequel to your own novel, heed the warning of Allister Thompson:

“Don’t get carried away with your cliffhangers.”

The trick to setting up a sequel with a plot-twisting epilogue is to start sowing the seeds earlier in the novel. You need to weave enough information into the body of the story so that when the cliffhanger appears in the epilogue, readers have a foundation upon which they can speculate in anticipation of the next novel. Should your cliffhanger arrive totally out of left field, with absolutely zero lead-up or foreshadowing, it’s more likely to leave people wondering what on earth they just read as opposed to wanting to read more.

Likewise, if your epilogue suddenly contains a heap of new information to hint at a sequel, it might completely overshadow the rest of the book and feel quite unnatural, leaving the reader confused and annoyed.

If you’re looking for more epilogue examples and books that brilliantly employ them, here are some you might want to check out:

Some of these books also feature in our post about prologues, so make sure to go back and read that if you haven’t already. Quite fittingly, this concludes our parts of a book guide.

HiIs the post credit scenes (the last scene) that we saw in Marvel movies and other movies consider as epilogue or that is something different?Waiting your answer

The simplest way to format your manuscript to industry standards.