Part 1 – 3 Types of Irony: Tell Them Apart With Confidence (+ Examples)

How good are your theme-detecting skills?

Situational Irony: 7 Examples That Will Make you Think

Situational irony takes place when, in a twist of events, the outcome of a situation significantly differs from a character’s expectations about it. Depending on whether the outcome is positive or negative, this can lead to humorous or tragic results. For example, a detective is appointed to solve a crime, but later is found guilty of committing it 一 the paradox of the situation is, to say the least, amusing.

To better understand this literary device, let’s look at some situational irony examples from ancient and modern literature.

Master these 40+ devices to level up your writing skills.

The Gift of the Magi by O. Henry

In "The Gift of the Magi" by O. Henry, married couple James and Della cannot afford to buy each other special gifts for Christmas, but they independently decide to go out of their way and surprise each other anyway. Della decides to sell her hair (which her husband adores) to buy him a watch chain. At the same time, James chooses to sell his watch to buy her a set of ornamental hair combs.

In this classic example, what’s ironic is that both characters sacrifice something meaningful to surprise their partners and make them happy, but end up disappointed after losing something valuable and receiving an unwanted gift. This double irony results in a sad effect that brings the reader closer to both characters, as their dedication to each other overshadows their unfortunate gift exchange.

Antigone, Euripides's sequel-of-sorts to Oedipus Rex, takes place in Ancient Thebes, where Antigone’s brothers Eteocles and Polynices both died, fighting each other in battle. Antigone’s mission is to bury Polynices, whom the new king Creon refuses to bury because he sees him as a traitor for joining a foreign army.

Antigone can distinguish between city law and the expectations of the gods, and knowing that Polynices must receive funeral rites to enter the Underworld, decides to bury him anyway. Creon discovers her plan and has her arrested and sentenced to death. His son, who is betrothed to Antigone, begs his father to spare her soul 一 but he ignores him and laughs it off.

Tiresias, a blind seer, warns Creon about the dreadful consequences of his disrespect for the dead, saying the Gods are angry. Worried, Creon decides to reverse his decisions 一 but it’s too late. A cascade of death curses him with pain: Antigone is found dead, which leads Haemon to kill himself, which brings his mother Eurydice (Creon’s wife) to commit suicide, too.

The irony of the situation is that Creon’s arrogance and disrespect for the dead led his closest family members to tragically die. Even more ironic is the fact that the blind seer is actually the character with a clairvoyant understanding of events, seeing things exactly as they are despite his physical blindness. In a devout society, this situational irony served as a powerful reminder to obey and honor the gods, or pay the cost.

Find out which literary luminary is your stylistic soulmate. Takes one minute!

The Necklace by Guy de Maupassant

Set in 1884 Paris, 'The Necklace' by Guy de Maupassant tells the story of Matilda, a middle-class woman who desires jewels and fine clothing. When her husband comes home with an invitation to a ball at the Palace of Ministry, she turns it down 一 complaining she has nothing to wear. He sacrifices his savings to buy her an appropriate outfit, but she’s then faced with her lack of jewelry, so she borrows a diamond necklace from a wealthier friend.

At the ball, Matilda enjoys the life she always dreamed of, but also loses the necklace. To return it, she and her husband buy another one using their inheritance money and taking up a loan. They then start working two jobs to repay the debt, considerably lowering their living standards. Many years later, they discover that the original necklace was fake and worthless.

It’s hard to miss the situational irony in this classic short story. Instead of helping her climb the social ladder, Matilda’s unhealthy obsession with wealth and status leads her and her husband to absolute misery. Both humorous in its reversal of the readers’ expectations and serious in warning against greed, the story uses irony to ask readers if the things they want really matter.

Convenience Store Woman by Sayaka Murata tells the story of Keiko Furukura, an introvert and outsider who seemingly finds her calling when she lands a job at a convenience store. In the regimented environment of a konbini, guided by manuals and clear rules, she learns exactly what to do to be liked and respected 一 and what it means to have a sense of purpose. Many years later, having been pressured by family and colleagues to improve her position in life, she quits her job and gets married — but soon enough realizes that her true place is at the convenience store where she returns to work.

Keiko’s situation is highly ironic: she only feels empowered, fulfilled, and liberated as a convenience store employee, an alienating job that demands she set any sense of personality aside. Instead, she finds society’s pressures to pursue individuality repressing, in the same way that most people find jobs like hers strip them of their freedom. By turning society’s standards on their head, Murata uses situational irony to create an unexpected, humorous, and thought-provoking effect, really getting readers to reconsider their definition of ‘normal’.

The book Erasure by Percival Everett tells the story of Thelonious “Monk” Ellison, an educated man who wants to write fiction. Still, no publisher supports him because, as a Black author, they expect him to write about the hardships of Black people.

Enraged, Monk decides to write a parody novel narrating the “life in the ghetto” of a troubled Black young man, to expose racial stereotyping in publishing. Ironically, the novel gets picked by a major publisher and becomes a success. Monk finds himself on a book tour promoting a story that perpetuates the stereotypes (and supports the industry) he’s fighting against.

😂😲 Situational irony leads to humorous or tragic results. Learn how with these 7 examples.

Everett makes the reader empathize with Monk’s frustration, then uses irony to highlight how difficult it is to change the entrenching system we live in 一 even with good intentions. More importantly, the comic nature of the book contrasts with the serious issue at hand, posing the question of whether a text can be valued for its content regardless of an author's race.

Harry Potter and the Deathly Hallows by J.K. Rowling

Throughout the seventh book of the Harry Potter series, readers follow Harry on his quest to find and destroy Voldemort’s six Horcruxes. At the novel's end, we discover that there is a seventh Horcrux, so to speak, and it's Harry himself. 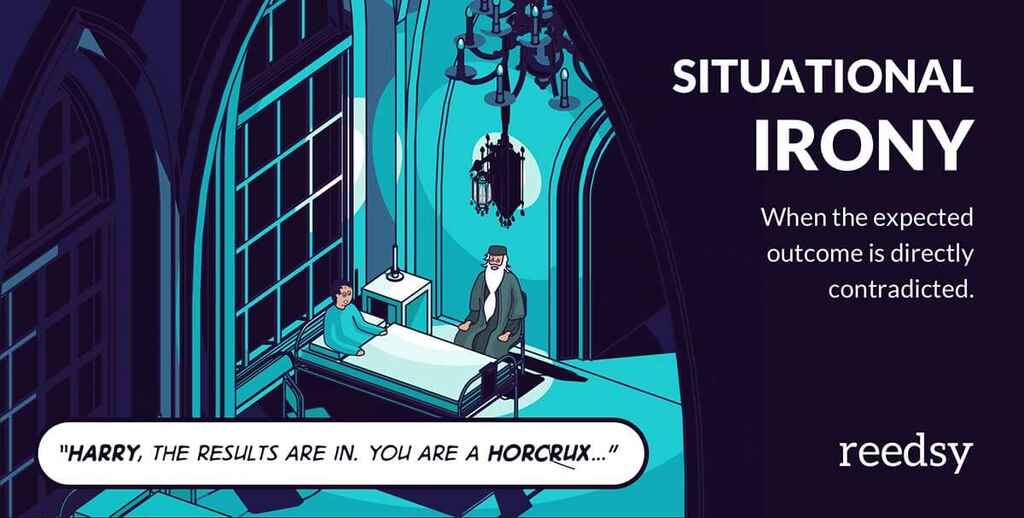 This unexpected twist also comes with the ironic realization that Harry must sacrifice himself for Voldemort to die. So he willingly goes to meet Voldemort — and his own death. But when Voldemort uses the killing curse on Harry, it has the opposite of his desired effect. Harry lives while the Horcrux dies, bringing Voldemort closer to his greatest fear: mortality.

In this way, Harry being a Horcrux is a double case of situational irony. Harry believes he must die to vanquish his enemy, whereas Voldemort thinks he is killing Harry, but he’s actually killing himself. With an unexpected turn of events, Rowling solves a high-stakes conflict, built up across several books, giving the readers the payoff (and sense of relief) they were looking for.

A Lamb to the Slaughter by Roald Dahl

In this typically twisty short story from Roald Dahl, a betrayed housewife kills her husband with a frozen leg of lamb. When the cops arrive at her place to solve the crime, she cooks the lamb and feeds it to them, effectively making them dispose of the evidence.

It’s a double case of situational irony: when you expect the housewife to be heartbroken about her husband's desire to separate, she abruptly kills him. When you expect her to break down and confess her crime, she calls the Police and blatantly serves them the incriminated weapon.

By carefully executing twists and turns, the author emotionally engages the reader, provoking a mixed reaction of disbelief and excitement. Since situationally ironic storylines inherently possess an element of surprise, they're common in the thriller, crime, and mystery genres.

Overall, you can use situational irony in different ways: to deliver your story’s message in unexpected ways, lightheartedly invite readers to reflect on serious matters, or entertain them as they observe a character's expectations clash with reality.

Next up, we'll be looking at some examples of dramatic irony 一 which will complete your knowledge of the types of ironies!

How good are your theme-detecting skills?