Dialogue tags are the words that frame dialogue in a piece of writing. These tags help readers identify the speaker, and can convey the emotion, tone, and context of a conversation. For example: in ‘“Thank God,” Alexandra said,’ the dialogue tag is ‘Alexandra said.’

We’ve already discussed how dialogue punctuation works in English, but we’re using this post to look at how you can use dialogue tags effectively:

Did you get taught at school that "said is dead"? Find out why that's wrong, and more top tips for writing great dialogue with Reedsy.

1. The simplest dialogue tags are often the best

Bestselling crime writer Elmore Leonard stated in his 10 Rules for Writing that a writer must “never use a verb other than ‘said’ to carry dialogue.” While never may be a little extreme, it’s true that, in most cases, said is a sufficient tag.

Even though there are tons of colorful verbs at your disposal, the truth is that you should use unusual dialogue tags very sparingly. While using an alternative, like she called or he muttered, might sometimes be illustrative, it can also be distracting and pull readers out of the conversation. Said blends easily into the dialogue, allowing the actual talking to — well, do the talking.

For example, the two following lines convey pretty much the same thing — though one has a much more conspicuous dialogue tag:

“Have fun at the party!” Sheila said.

“Have fun at the party!” Sheila trilled.

Reedsy's own Shaelin explains more about why, when in doubt, simple tags are the way to go in the video below. The video also contains a whole host of other tips for improving your dialogue, so be sure to check it out. 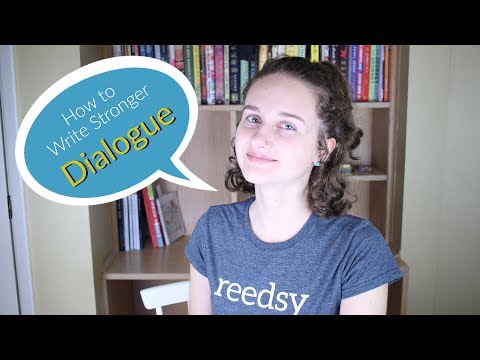 Having said that, once in a while, you might want to shake things up. So read on for more dialogue tag fun!

Which dialogue tag are YOU?

Find out in just a minute.

2. You can make ‘said’ more interesting

If you’re bored of plain old said, one of the best ways to balance your use of alternative tags is to simply use said — but make it pop and put a little garnish on it.

On occasion, why not spice things up by adding some extra description in the form of an adjective or adverb.

Here are a few examples of said with a common descriptor::

Of course, you have endless possibilities and options when it comes to accesorizing said:

You could also try out some adverbs for size, like happily and quickly. However, many writers consider adverbs a mark of purple prose, so keep them to a reasonable minimum. You might use an adverb to modify said in a particularly dramatic situation ("How could you keep this from me?" she said furiously). But otherwise, verbs and adjectives tend to do the trick.

3. Shake things up with action beats

Another strategy to make more interesting tags work is to break them up with action beats, or descriptions of what characters are doing in the scene.

If you're not familiar with action beats, they’re just phrases that indicate what a character’s doing as they speak. They can be used in conjunction with a said dialogue tag, or be used alone. This is because readers can pick up that the action beat is attached to the dialogue due to its proximity, and therefore that the actor is probably the speaker. For example:

Alice stepped out from the shadows. “Did you forget about me?”

Alice stepped out from the shadows is an action beat that shows the character's movement as she speaks, to signal that she's the one talking.

An action beat may appear before or after a line of dialogue, or even in the middle — just make sure to punctuate it properly. Here are a few more examples of action beats:

Murphy approached the stand and took a deep breath. "The defendant pleads not guilty, Your Honor."

"I was just trying—" I said through clenched teeth, trying to control my frustration, "—to help you out, for once in your miserable life."

"When are we going to the beach?" Sophie looked up at her mother expectantly.

Action beats are a useful alternative to bona fide dialogue tags, and a great way to mix up your scenes. That said, as with other dialogue indicators, you want to keep action beats to a minimum. In a typical scene, you might have one extra-descriptive tag and a couple of action beats. The rest should all be he said/she said and implied speech, to keep the pace moving along nicely. Check out a real-life example below of dialogue from George Eliot's Middlemarch.

4. Not every line requires a tag

Dialogue tags are a bit like chocolate truffles: they’re great but you shouldn’t have one every time you open your mouth. In much the same way, you don't need a tag with every line of dialogue, especially if you've already established who's speaking!

To see why you shouldn't use too many tags, descriptive or otherwise, take a look at the following dialogue sample:

“What are you doing here?” he demanded.

“What do you think I’m doing here?” she inquired.

“You know this isn’t going to work,” he sneered.

"I think you're underestimating me," she retorted.

The descriptive tags here are clearly overkill — you can easily deduce the tone of the conversation without them. But even using he said/she said four times in a row would be unnecessary in this case, as it's only two people speaking. A much-improved revision would be to keep just one tag, and identify the second speaker in a more indirect way:

“What are you doing here?” he demanded.

She stepped across the threshold. “What do you think I’m doing here?”

“You know this isn’t going to work."

"I think you're underestimating me."

The reader doesn't need many tags to see that this conversation is between two people. It's only in lengthy conversations of more than two that you may need to use said multiple times. And even then, you should still keep your "alternative" tags to a minimum, as they distract from the dialogue itself.

5. Try out an interesting synonym for size

If on the odd occasion you do want to get more experimental with your dialogue tags, then we’ve got just the resource for you. Our list of 250+ other words for said contains pretty much every synonym you could ever need, handily categorized by mood and tone.

Some of our favorites include:

Whatever you’re trying to express with your dialogue, you’ll find an appropriate tag in there.

You might be raring to use all the exciting new tags you pick up from our “words for said” post (and who can blame you? Vociferated is a great word). But it’s important to not only be sparing with their use, but also to make sure that, when you do use one, it’s perfectly chosen.

Nothing is more distracting to readers than when a word just seems off. This is why, when you do use a descriptive dialogue tag, it needs to fit the situation perfectly.

While this tip might sound obvious, editors can attest that odd verbs in dialogue tags are all too common. For example:

“I never want to see you again!” he exclaimed.

That might seem like a good place to use the word exclaim, since we know it means to say something loudly. However, the underlying connotations of exclaim are a bit different — an exclamation is usually a positive shout of surprise, not a negative one. Better tags for the dialogue above might be:

All of these depict the tone more accurately than exclaimed. And again, you don't even really need such a descriptive tag, as the message here is pretty clear.

But if you do decide to use one, make sure you know what it actually means! This is where our list comes in handy — you know exactly which words are associated with which emotions and scenarios.

“We hope you’ve enjoyed this how-to on dialogue tags,” the mysterious writer concluded. “If you’re looking for examples of dialogue tags in action, you can check out 15 examples of great dialogue analyzed, to see how the pros do it!”