Submitted into Contest #85 in response to: Start your story with the line, “That’s the thing about this city…”... view prompt

The year 2020 will be remembered for a lot of things - not least the rise of the Black Lives Matter movement around the world.

The organisation has led huge street rallies and high-profile campaigns against racism and police brutality.

Now the three women who founded the movement have told the BBC they believe it has transformed politics.

"Black people alongside our allies stood up to change the course of history and we won," said Alicia Garza.

Garza and her BLM co-founders, Patrisse Cullors and Opal Tometi, spoke as part of the BBC 100 Women Masterclass 2020, a digital live event of masterclasses, big interviews and guests on 30 November.

The trio started the Black Lives Matter movement in the US in 2013 after the not guilty verdict against George Zimmerman, who shot dead unarmed black teenager Trayvon Martin.

Protests erupted again this year after the killing of George Floyd, who died in May after a police officer knelt on his neck during his arrest in Minneapolis.

"Black Lives Matter, after seven years, is now really in the DNA and the muscle memory of this country," said Garza. "We all have watched how our community members, our family members, are being murdered on camera.

"There are so many ways in which, even as this movement was exploding for the second time, major news outlets continue to focus on the wrong thing.

"Over and over again, the burden and responsibility for violence gets placed at our feet, but nobody talks about the violence that our communities are experiencing both at the hands of government neglect, but also at the hands of police officers.

"Now we have a new element which is vigilante and white supremacist violence."

Despite the ongoing struggle, the founders of BLM struck a cautiously optimistic note, especially when speaking about the defeat of Donald Trump in the US election. Black women in particular have been credited for playing a major role in President-elect Joe Biden's victory. 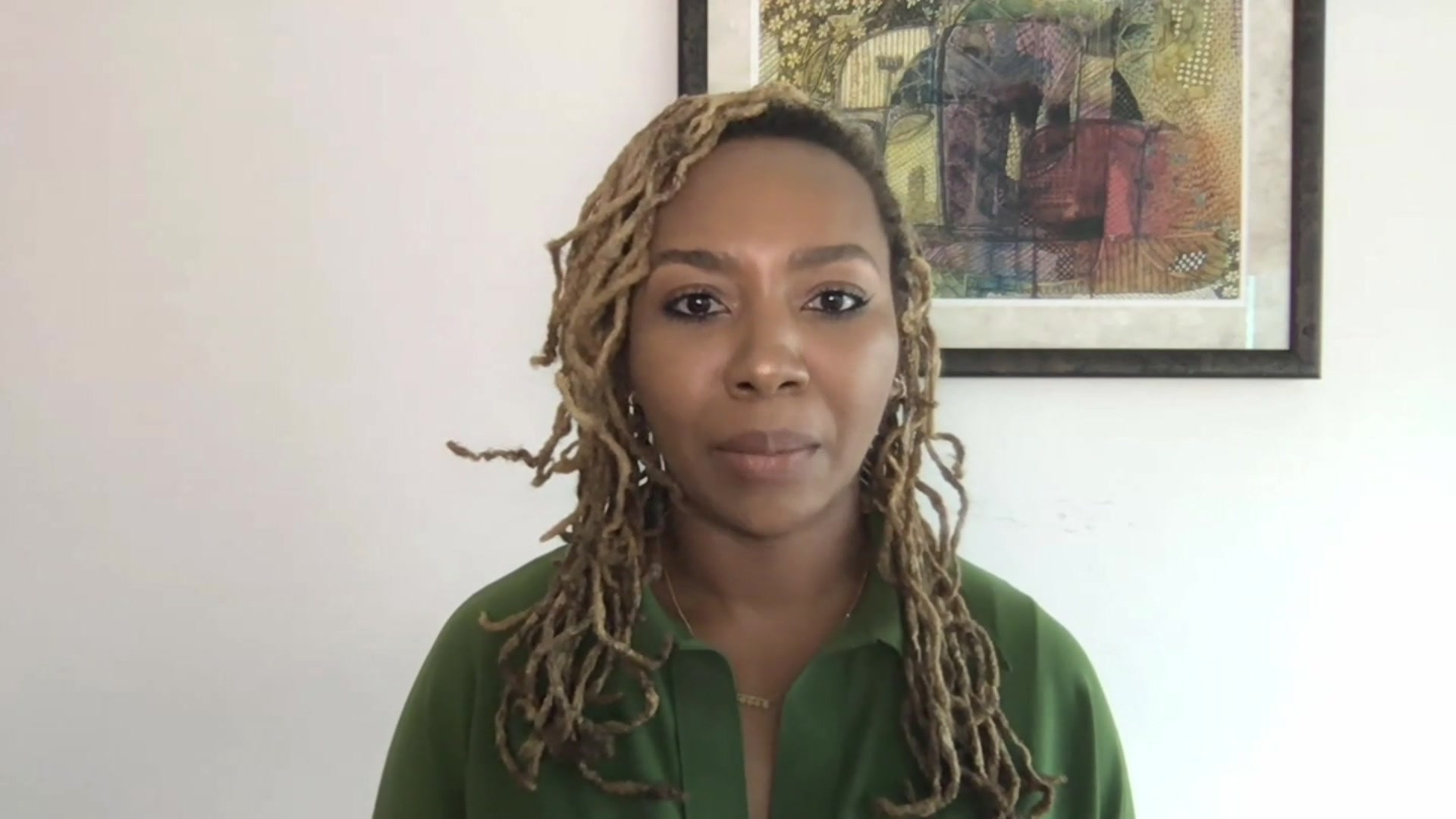 The BLM trio welcomed the acknowledgement of this by Kamala Harris, who has made history as the first female, first black and first Asian-American US vice-president-elect.

But they said they would lobby for her to be not just a "symbol but a fighter for our communities".

"I'm heartened by seeing the ways in which the BLM movement but also a number of other movements have risen to the occasion and have brought forward political thought and action that really reflects the best of who we are," said Opal Tometi.

"I think our movements are showing a whole other way is possible and I'm very moved and grateful to be alive for a time such as this."

BLM protests have spanned the generations

Describing how its role has changed this year, Garza said BLM was increasingly making connection across the world, including elevating the #EndSars protests against police violence in Nigeria.

"We are transforming politics as we know it but we are very focused on transforming power, the way that it operates, and making sure there is more power in the hands of more people," she said.

Patrisse Cullors said the achievements of BLM in 2020 would go down in the history books.

"What I'm excited about is that my child gets to say that his mom, alongside other fierce black women, did everything that she could, and we could, to make this place better for us.

"I'm excited about that history being told."

BBC 100 Women names 100 influential and inspirational women around the world every year, and tells their stories. Follow us on Instagram and Facebook and join the conversation, using#BBC100Women.

More on this story

It was video footage seen across the world - Derek Chauvin with his knee pressed on the neck of George Floyd for about nine minutes before he died.

Three other dismissed officers will stand trial together later this year, but proceedings in Mr Chauvin's trial will start on Monday, when jury selection begins.

How will the jury be picked?

A pool of eligible local citizens has been called to appear by Hennepin County in Minnesota. From them, a jury of 12 and four alternates will be selected. It could take weeks.

Although it is highly unlikely potential jurors will have no prior knowledge of the case - George Floyd's death in May last year in Minneapolis inspired weeks of global protests - they will be questioned to determine whether they will be able to judge Derek Chauvin fairly.

Once 16 people have been approved, the jury can be seated. The trial itself will not begin until 29 March.

Each potential juror has already been asked to fill in a 16-page questionnaire about the case.

What's in the questionnaire?

The main thrust is to determine familiarity with the case and issues such as a potential juror's own interactions with law enforcement.

How potential jurors respond can lead to either defence or prosecution dismissing them.

The case prompted a wave of calls for the officers to face justice, so will be closely watched

Prof Valerie Hans, a jury researcher based at Cornell Law School, says the questionnaire is more detailed and personal than most pre-trial documents, and asks about their "deepest attitudes on some of the most important political and social topics of the day".

Prof Hans says the aim for the two teams is to get "a sense of whether or not a prospective juror will be open to the kinds of arguments that they intend to make over the course of the trial".

The selection process is different from the UK. Jury trials there are less common, and jurors - picked at random - don't know which trial they will serve on until they've been sworn in. Jurors can only be dismissed by a judge in very specific circumstances.

Why is jury selection so crucial?

In cases involving issues such as racism, the selection process can be seen as hugely important to the outcome of the trial and how fair it is perceived. A lack of diversity could lead to questions about the legitimacy of the verdict.

The jury pool in Hennepin County was 80% white and 8% black in the financial year to September 2020, the New York Times reported, a bigger gap than for Minneapolis as a whole (64% to 19%).

The vetting system does try to ensure that a cross-section of society is represented, but at the same time, both defence and prosecution will be looking for jurors that will bring them a favourable outcome.

In high-stakes trials, they often use special consultants who look at factors such as the jurors' backgrounds and even their body language.

Prof Hans says the judge will need to keep a close eye on patterns emerging among dismissals of potential jurors by the prosecution or defence, as this cannot be done on race grounds.

Security has been upped around where the trial will take place

In general terms, legal experts say white jurors are less likely to convict law enforcement officials, although it is in unclear how much of this has changed following the worldwide reaction to the Floyd case.

The chosen jurors will be partially sequestered, or isolated, during the trial and fully sequestered once deliberation starts. They will also remain anonymous until the judge allows their identities to be made public.

It's not uncommon for US jurors to speak out about their deliberations afterwards, and in some infamous examples, like the OJ Simpson trial, some have even gone on to write books about their experiences.

What will be key to reaching a verdict?

media captionGeorge Floyd death: What’s changed, 100 days later? The prosecution and defence can both ask Judge Peter Cahill to dismiss a potential juror "for cause" if they perceive bias. The prosecution can also dismiss nine potential jurors - and the defence team 15 - without giving any reason, although this can be objected to.