What It Takes to Write a Book that Becomes a Movie

Brooke Maddaford, Reedsy editor and former editor at a Big 5 publishing house, shares her tips on what your book needs to be made into a movie, based on her experience editing A Futile and Stupid Gesture: How Doug Kenney and “National Lampoon” Changed Comedy Forever, which was recently adapted into a Netflix Original Movie.

The concept of art being derivative is not new. Hollywood loves making movies based on best-selling books because the audience is built in and the story already works. The film is almost guaranteed to have loyal fans who read the book and are excited to see the adaption, so producers don’t have to agonize about ticket sales.

Four of the top five highest-grossing film franchises have literary origins. Forty-seven of the eighty-nine films that have won the Oscar for Best Picture were based on a book, novella, or short story. That’s over fifty percent!

But not every good book is adapted into a film. Why is that?

Josh Karp was wise to write a biography about National Lampoon because his story spotlights a comedic empire built by famous eccentrics; pretty stellar biographical material already. But it wasn’t the just the brilliant personalities or counterculture backdrop that attracted Netflix. It was how the author swirled together his plot, characters, and setting — and his well-crafted writing — that produced a book with the qualities that Hollywood seeks.

Are you wondering what your book needs to be made into a movie? Is there a secret formula to get your story noticed by Hollywood?

For a book to be made into a movie, it first must be a good story that’s told well. — @WORDHAWKEDITING

It’s simple but true. Literary folks love to debate if the plot, characters, or setting are most important, but the reality is that the best books balance all three and are enticingly written.

Want to learn more? Here are five steps that can help you write a book that will become a movie.

Step 1: Write a Driving Plot with a Solid Narrative Arc 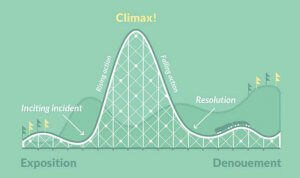 You might be wondering what the difference is between “plot” and “narrative arc.” The various events that occur throughout the story construct the plot, while the narrative arc is the order in which those events are presented. A driving plot and solid narrative arc are symbiotic elements that exist in all good books—especially those that have what it takes to be made into movies.

It's crucial that you craft a strong narrative arc — I cannot overemphasize the value of each plotline (including all subplots) having a clear beginning, middle, and end. Don’t get too caught up in how many subplots you have — more is not necessarily better! Keep the plot moving forward at a comfortable pace so readers don’t get bored or feel hurried.

People who are both three-dimensional and dynamic are the most compelling because they’re interesting and, rather than being static characters, they demonstrate growth and change.

Also, audiences become emotionally invested in sympathetic characters because they have traits we can identify with — if readers can see themselves in characters, they’re more believable. This is necessary for both fiction and nonfiction, though some nonfiction authors mistakenly believe their hands are tied because of the genre’s constraints. While nonfiction authors must remain truthful, even the most boring, bland, or lazy characters can appear sympathetic if an author emphasizes the character’s relatable traits.

Don’t mistake sympathetic for likable; readers don’t always have to admire your characters, we just have to care about them.

The setting of a book is as important as the plot and characters because it roots the story in both time and place. Don’t treat your setting as just the story’s background — make it an integral part of the book.

Would the Harry Potter books be the same if they occurred in California in 1850? Would The Devil in the White City have been a best seller if it was set solely in the architect’s office? Probably not. The setting of a story is as critical as the story itself.

I always advise authors to think of their books’ settings as another protagonist. For both fiction and nonfiction, authors must detail a distinct and visceral world that radiates with the mood and atmosphere the author envisions.

Put simply, this often-repeated adage describes the technique of allowing readers to independently deduce what you’re trying to say through the use of descriptive details, rather than spoon-feeding us the information. As films are an inherently visual medium, books that succeed in showing rather than telling tend to translate easier to the screen.

Here’s an example of “telling” where the author flatly states what’s happening:

John waited for June at the restaurant. When she walked in, he noticed that she was tall and looked cold.

Although readers are told substantive details about the characters and setting, a rewrite that invites us into the book’s world and shows us the same information is much more captivating.

John watched as June had to duck her snow-covered head to comfortably fit through the restaurant’s doorway. Her cheeks were red and chapped, and her hands were balled into frozen fists.

Authors that show, rather than tell, craft distinct narratives that allow readers to see, feel, taste, hear, and smell what the characters are experiencing. By harnessing the senses, the audience is invited to actively, rather than passively, engage with the prose. As Mark Twain said, “Don’t say the old lady screamed. Bring her on and let her scream.”

Authors frequently ask me if telling is ever allowed and the answer is yes! Writing is an art, which means rules are meant to be broken. In books that employ a strong narrative voice or that need a great deal of exposition, telling can be the most efficient choice — just go with your gut on this one. Keep in mind that film is primarily visual, so telling instead of showing could get messy in the adaptation.

(This is a great resource that talks more about “Show, Don’t Tell.”)

Step 5: Don’t Write a Screenplay Masquerading as a Book

If you’re uncertain about if you should write a screenplay or a book, ask yourself these questions:

There are no right or wrong answers to these questions — it’s important to follow your intuition.

My advice? Write what you know. And enjoy the process!

If you have any thoughts or questions on writing a film-worthy book, drop a message in the comments below.

thank you so much for the help , i have many thoughts of stories i just dont know how to start and this really helped :) hoping for more

thank you for the help , i really have many thoughts of stories ,that really helped.

Wow, I am an author and this was really helpful... Thanks😘

Is it possible for a book to become a novel