Submitted into Contest #144 in response to: Write about a character who’s pathologically camera shy.... view prompt

A giant shark named Hank once lived in a large big yellow ocean. Unlike most sharks that only eat every two to three days, Hank has to eat once a day to maintain his massive size. Hank comes from a family of large sharks by which they were known all over the Yellow Ocean as the family that originated from Mammoth Underwater World. The Mammoth Underwater world is an area located near the center of the earth where it is known that all sharks from this area overate. This makes it impossible for Hank's family to be a standard size. Hank had a sister named Shorty, that was larger than the empire state building. Hanks's big brother, he was no joke. They called in Mr. Wide; he was wider than a football field and hate taking pictures. Everyone in the community would leave home when this family swam down the street. The neighbor was in fear that Hank's family would accidentally eat the community. Little did they know this family was gentle and harmless. Hank's mom would cook meals for the neighborhood. This was a happy place; there was no crime in the underworld. Everyone helped each other.

When Hank was ten years old, " That Day" happened that changed Hank's life forever. One day on a dark but sunny afternoon Hank was playing Fin-ball and taking pictures in front of his house with his best friend Boppy (the horsefish from the next street over) when suddenly a loud crack in the Ocean floor begins to separate everyone. Hank thought this is what grandma shark told me about "That Day" was a huge under-quake has begun. An under-quake is a modern-day tsunami but worse. All The water was spinning sideways up and down, in and out of air pockets causing all the fishes to run and dodge the air bubbles. You can hear everyone screaming, "run Hank run, don't let the bubble get you run ."If you get sucked in one of the air bubbles it would take you to the place where all Mammoth sharks were forbidden to go to the surface of the Ocean and lost forever. Unfortunately, That day happened. Hank was separated from his family and never to be seen again. Hank went unconscious after bumping his head. The underworld was destroyed. No one survived "That Day."

After one hour Hank arrived at the surface of the Ocean. The bubble popped and Hank was free to swim freely throughout the Ocean. Hank was freezing due to the temperature change traveling from the earth's center to the top of the Ocean. Years passed Hank was sad, lonely, and depressed because he had no one to talk to.

Late one night in the twenty-fifth hour, Hank was swimming about hunting for prey to eat. Hank knew a lot of people but didn't have a lot of friends. Hank saw a crocodile named Christian, this Crocodile eyes sight was destroyed many years ago when an unknown explosion happened out of the water and took most of Christians' eyesight away. Christian heard Hank as swum close to him Christian said, "Hello, is anyone there?" Christian couldn't see but he could feel the water move in his direction. While that was happening, it seemed as if Hank was coming closer and closer to Christian without stopping. 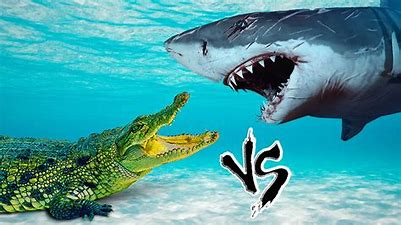 Hank didn't see the big blue rock near Christian because the water was a deep blue, the same color as the rock. Christian said, "Is there anyone here I can hear you?" Christian thought it was Bessie, The little eel that swims around him to tell him what to look out for in the water at night. Hank refused to say anything and swam toward Christian, sitting near the big blue rock. Hank slammed into the rock headfirst. Blood went everywhere. Hank knocked himself out. Christain stayed with Hank for four days. Christian would not let anyone near him. When Hank finally came to, Hank said," Hey um, sorry, I was going to eat you, but in return, you saved my life, how can I ever repay you? " It's okay, dude said Christian I wanted to warn you that I was sitting next to this rock and you can't see it from a distance if you're not familiar with this area. Christian said, "Hey, you are that dude who came here through the air bubble from the underworld?" Hank replied, " Yeah, that's me, the shark with no family. I haven't talked to any family members for over fifteen years. Christian said it's been about twenty years since I had my full sight. It was silent for a few seconds then they both said at the same time "That Day"! They were both excited; Christian said he was hanging out with his grandma near the beach when the ground separated underneath them. Christian said he last remembers seeing his grandmother slowly drift further and further away until she was out of sight never to be seen again. Christian said " I will never forget that day my life changed forever. I lived in this lonely Ocean with no family, just a few fish hear, and there would stop by to say hi from time to time, but no one have time to say and sit and talk to me, so thank you."

They both realized they shared the same story. Hank has come to the conclusion that this new place called home wasn't so wrong after all. Christian was happy that he had found a new friend that could help him get to all the places in the Ocean he had always wanted to go to. They talked for about three hours, and then Hank said," Would you like to be my friends with me?" "Sure, dude, as long as you don't eat me!" They both laughed at that point and became friends. Hank realized that his life has its ups and downs, and in times of need, someone will always be there for him.