The dull flatulent roar of the diesel engine gearing up as it prepared to make its way down the lonely road leading to town, was barely audible against the sound of the steadily increasing wind. The rain pouring down in torrents from the low dark clouds indicated less than favorable driving conditions. Buckling his seatbelt tightly in anticipation of the long trip ahead, Charles Ferguson was vaguely aware of the myriad of feelings stirring deep within him. Feelings long forgotten with the passage of time. Or so he’d thought. Fragments, bits of time, were all contained within the envelope sitting on the dash in front of him. He hadn’t opened it yet. He'd wanted to, but he just hadn't been able to muster up the courage. He knew what it would contain. Memories of a past he’d been running from. A past that he was suddenly being forced to confront head-on. The question was whether or not he was ready for what he might face. Well, he thought, he'd soon find out. For now, he couldn't afford to let his mind wander. Hauling steel to the local steel mill was a job that required his complete attention.

The road ahead was lonely and desolate. Twisting and turning. Miles and miles of nothing but evergreen trees. Reaching for the dial on the radio, he turned it up. Hoping it might drown out the sound of his heart palpitating through his shirt. But it only grew louder. The voices in his head were fighting for control. His palms were sticky against the leather steering wheel. An uncomfortable knot began to build at the base of his neck, and an even more uncomfortable tightness spread throughout his chest. It had been years since he’d been back home. He wondered what she would be like. He tried so desperately to recreate her in his mind. He pictured her. Sitting in the seat beside him. He leaned his body against hers. It was so comforting. Just as it had always been.

A deer jumped out of nowhere without warning, startling Charles back to reality. Suddenly he was just that lonely young man again. Cowering in a corner. Hands covering his face. Reaching under his seat, he searched frantically, for the bottle of Jack’s that he had stashed under there for times like this. He’d been searching with one hand and steering the truck with the other but all he’d come up with was an empty coffee mug and a half-eaten donut. Suddenly he was being yelled at by some “imbecile” in the opposite lane.

“Hey! Watch where you’re going buddy!!! You’re going to end up killing somebody!”

Charles let everything that had been building up inside of him explode as he yelled back. Quickly stepping down out of his truck he was surprised to find himself face to face with a woman. A rather pretty one at that. Not the Hollywood type that he’d been accustomed to seeing in the concrete jungle. Yet there was something oddly familiar about her. Her eyes. There was something about them that he found strangely comforting.

“You’re not from around here,” she said. It was more of a question than a statement.

“Well, then you know that town is just up there. Around the corner. Just past that gas station. You might find a place to rest and shower up there. But first, there’s a nice little café right here, if you’re looking for a bite to eat.” She pointed to a rather dilapidated-looking shack with a sign reading. ‘Joes Diner.’

“We can sit and chat for a bit,” she continued. "Something tells me you could use a friend. ”

He just nodded climbed back into the truck and followed her to the diner.

“Penny for your thoughts?" She was staring at him rather intriguingly. It was a little unnerving.

“Actually that’ll be a nickel, he winked, trying to lighten things up a bit. He sipped at the coffee the waitress had sat down in front of him. “Inflation. You know. On account of how I'm a starving truck driver and all." He chuckled nervously.

“So what’s your name anyway,” she asked, sliding a nickel across the table? "Or should I just refer to you as the starving truck driver?"

“It's Charles,” he replied. “My name is Charles Ferguson. But my friends call me Chuck."

“Kate.” He smiled. It suited her. Simple but yet with a hint of elegance. Classiness. He liked her. He didn’t often like people. He'd built a wall around his heart. He had no plans to let anyone past it. But she made him feel oddly at home. Something he’d missed. Something he thought he’d never find again. Not since she had left him. His memory went back again to his lost love. His childhood sweetheart.

“Would you like some pie with your coffee?” The sound of the waitress's voice brought Charles back to reality again.

“No thanks. That’ll be all,” all he replied reaching for the bill.

“My treat,” Kate said, reaching for the bill at the same time as him.

Their hands met and a tingle went travelling up his spine Taking her hand in his, they headed to the exit. He wasn’t one to believe in love at first sight but he couldn’t deny the giddiness he felt. The butterflies churning in the pit of his stomach as he watched her climb back into her vehicle He watched her disappear into the horizon but he knew they'd meet again.

Making his way back to the truck he climbed carefully up the ladder and into his seat. Buckling his seatbelt tightly once again, he looked at the envelope still sitting there on the dash in front of him. He picked it up and looked at it before opening it. It was from her. Tears formed as he contemplated what to do. And then he knew. He didn't need to read it. He placed the letter back into the envelope, gently kissed it goodbye, and thanked it for the memories it contained. And then he ripped it up. Opening the window he let the torn pieces of the letter go. He watched as the wind carried them away. This journey was no longer about the past but about the future. A future he had once feared. For the first time, in ages, he felt excitement and anticipation about tomorrow. He could finally stop running. 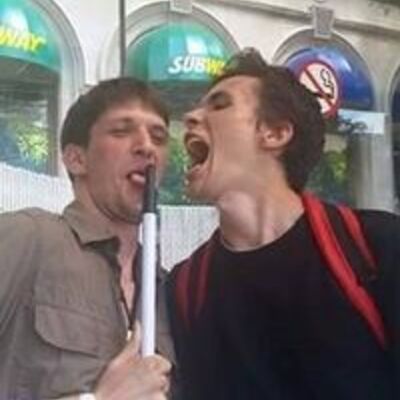 This a good read yo think about it

Thank you. That means alot :)