Active vs Passive Voice: Know the Difference and Fix It!

It’s not a big secret that passive voice is considered bad form. Supposedly, sentences in the active voice are stronger, clearer, and more direct; they can make your writing feel — surprise, surprise — more active. But this isn’t to say the passive voice should be edited out of your writing completely. It isn’t grammatically incorrect, after all. There are times when using the passive voice can even enhance a sentence.

We’re here to clear up the active vs passive voice debate once and for all by showing you how to spot the passive voice, when to use it, when to avoid it, and — in the case of the latter — how to fix passive voice. Let’s get started! 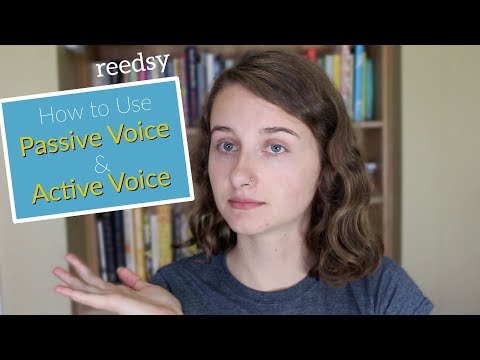 Nine times out of ten, you’ll be writing a sentence with a defined subject performing an action. If that’s the case, you’re better off using the active voice. Let’s take a look at some examples of passive voice and active voice side-by-side to see why.

The following sentence is active: the subject is performing the action.

In the passive voice, the same sentence would look like this:

The sword was swung by Louise.

When a sentence is passive, the subject is the thing receiving the action. So here, the sword — which is being swung — is the subject. Going from active to passive voice flipped the structure of the sentence and necessitated the prepositional phrase “by Louise”. This tells you that Louise is the one doing the action. But even though she’s doing the swinging, she’s not the grammatical subject.

Let’s look at one more example. The following sentence is written in the active voice:

If you were to write the same sentence in the passive voice it might sound like this:

Garfield is irked by Mondays.

You might think this makes you sound more like a fancy-pants author, but the truth is: the simpler, more direct sentence is better writing.

That’s not to say that you should always avoid the passive voice; there are times when using it can improve your writing. So let’s go over a few examples.

When to use the passive voice

All of the passive sentences we’ve seen so far have been what’s known as long passive. This means that the agent performing the action is stated, but is not the subject of the sentence. A telltale sign of a long passive sentence is the “by…” prepositional clause.

On the flipside, if the subject or performer of the action is not stated, it’s a short passive sentence. For instance, “Last year, a tree was planted on my road,” is short passive because it does not identify who planted the tree.

When the perpetrator is insignificant

For example, in this sentence the emphasis is on the fact that the woman has received a jail sentence:

“The woman was sentenced to five years in jail.”

But here, the emphasis is on the judge’s ruling:

“The judge sentenced the woman to five years in jail.”

You could write: “The woman was sentenced by the judge to five years in jail”  — but everybody knows who does the sentencing in the courtroom, so that information is unnecessary clutter.

The same goes for scientific writing, where a solution that is being dissolved in water, for example, is a lot more significant than the lab technician doing the dissolving.

When you want to seem objective

If you are writing something that requires objectivity — like a research paper — passive voice can also be your friend. It allows you to more easily avoid personal pronouns and to present information in a way that sounds unbiased.

When a topic is ambiguous, academics find the passive phrase “It is suggested that…” much more appealing than “I think that…”. Likewise, a journalist might use phrases such as, “It has been decided that…” or “A mistake was made…” to avoid defaming someone or making a statement that could be untrue.

Even novelists can make use of the passive voice in this way. Jane Austen, for example, loved to coyly poke fun at her characters by using a passive structure for an outward display of polite, ladylike manners. For example, if we were to put our best Jane Austen bonnet on, we might write something like this:

Though he had graciously declined the first four, on Monday morning Mr Warren discovered he had been sent another invitation to dine with the Smiths.

Mrs Smith sent Mr Warren another invitation to dine with them, though he had declined the first four.

Just to avoid the direct humiliation of Mrs Smith.

As you can see, passive voice isn’t something you need to avoid at all costs. There are times when it’s the right choice. However, if you’re writing something meant to invite readers in — like a novel — then relying too heavily on passive voice can result in writing that feels a little flat.

To avoid that, let’s take a look at how to fix passive voice sentences in instances where the active voice will serve you better.

To show you the three fool-proof steps you need to take to fix passive voice, we’ll use the following passive sentence as an example: “The dog is walked by his owner.” Super simple.

“Am / Are / Is being” + past verb tense — The dogs are being walked by their owners.

“Was / Were being” + past verb tense — The dogs were being walked by their owners.

“Will be” + past verb tense — The dog will be walked by its owner.

“Had been” + past verb tense — The dog had been walked by its owner.

If you’re unsure, that prepositional “by” phrase we keep mentioning is a great indication of a passive sentence that will probably sound better in the active voice.

Now that we’ve found the auxiliary verb, it’s time to remove it. Unfortunately, it’s not as simple as plucking that word out, job done — we’ll also need to adjust the tense of the main verb.

As we’ve seen, the main verb in a passive sentence is always in the past tense, so we have to look to the auxiliary verb to determine the right tense for our active sentence.

In our example, the auxiliary verb is “is” — present tense — so our main verb will be “is walking”, or just “walks”.

3. Change the subject of the sentence

In the sentence, “The dog is walked by his owner,” the dog is the subject and he is experiencing the action of being walked. To make this sentence active, the owner — who is performing the verb’s action — needs to be made the subject. If we then use the main verb we landed on earlier, and ditch the unnecessary “by” preposition, we get:

The owner is walking his dog.

Voila! The subject is now the action-performer, meaning this sentence is now active! In case that happened so fast you missed it, here are a few more passive to active voice examples:

Passive: The flowers were being planted by the gardener.
Active: The gardener was planting the flowers.

Passive: The book was written by the author.
Active: The author wrote the book.

We hope we’ve helped you understand how to identify and how to fix passive voice! If you feel like you could still use a hand, you can always turn to a passive voice checker, such as Hemingway, Passive Voice Detector, or Analyze My Writing, which are all free and web-based. Simply copy and paste the writing you want to check, and the writing app will highlight instances of passive voice for you.

If you end up being faced with a page of red squiggles, don’t worry too much. Just remember that passive voice isn’t inherently wrong — and now you’re aided with some knowledge on how it works, you’ll know when it has its place and when it needs an edit.

{}When I started my writing career, I only used Hemingway, and I really loved the platform! However, as optimization becomes increasingly important, my articles need some extra love when it comes to search optimization. INK has been helping me improve ten in this regard. Would be interested to hear your thoughts comparing INK vs Hemingway...}}

5 Writing Techniques Every Writer Should Try on for Size

Looking for some fresh writing techniques to build your skills or help you push through writer’s block? Here are 5 that you can apply to anything you’re working on. Try them on for size!