When Ryan Carriere decided to start writing a fantasy series, he also decided to dedicate himself entirely to his writing career and leave his stable day job. In 2019, he finished the first installment in his series — and debut novel — Firestone. But he quickly learned that writing a book is just one part of an indie author’s job, and that next up was the challenge of learning how to market it. For guidance, he turned to Reedsy Discovery.

As a first-time author, I wasn't sure how to market my book

After writing the first draft of my debut novel, Firestone, I searched the web for anything to do with revising, editing, and the whole publishing process. This was when I stumbled upon Reedsy and quickly realized how helpful their different tools and resources would be in conquering the steep learning curve of publishing.

While I leveraged editing, formatting, and other services through various platforms, the one thing I continued to struggle with the most was understanding how to promote my book. I knew, of course, about the importance of book reviews. When people purchase books, they always check out at least some of the reviews before buying. So when I found out about Reedy’s new book reviewing platform, Reedsy Discovery, it felt like opportune timing.

Reedsy gave me the guidance I needed

After I signed up, I quickly realized the potential of Reedsy Discovery, if done right. So when my book wasn’t being picked up for review to begin with, I was quite frustrated. That’s when I reached out to the Reedsy Discovery team and asked for guidance.

I was quickly met with one-on-one support to help me make the most out of their services. Their suggestions didn’t surprise me since I had struggled with nailing down the identity of Firestone from the beginning. Was it a children’s book or for young adults? What should the cover and blurb portray about the story? They helped me answer those questions and offered resources on how to best market my book, information on how to write a blurb that sells, and even offered some guidance on book cover design. 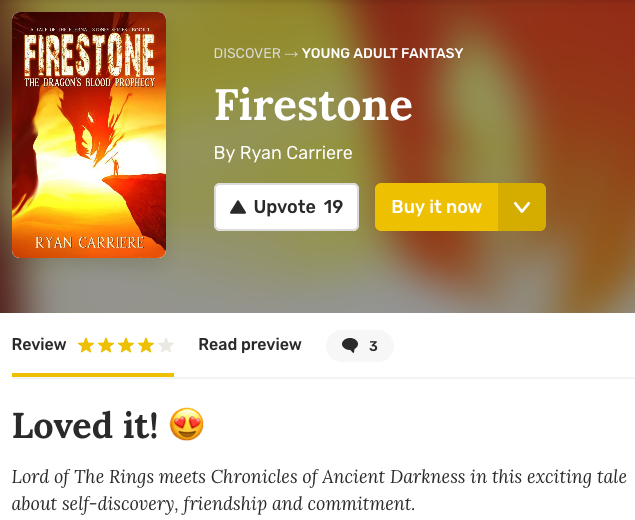 After working with the Discovery Team, I was able to transform those aspects of my book that were holding it back from its true potential. And right on cue, Firestone was picked up for review! Although I had been hoping to keep my 5-star streak from both Amazon and Goodreads alive, four stars was a great review. Reviews are subjective, and I am glad that I got a positive one and was able to use the Reedsy name to add some credibility.

I have found the Discovery review incredibly useful for spreading the word about Firestone. Not only have I used the “headline” as a hook in my Amazon description, but I also plan to update my author website with it. 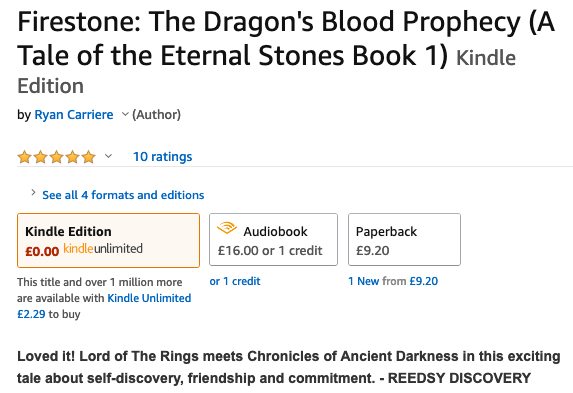 In terms of publicity, I have mentioned the Reedsy Discovery review in a press release that received coverage in the United States, and in an interview with Jess FM — an internet TV radio station with a nationwide viewership of 4 million. The Reedsy name is somewhat more influential than an individual review and referring to it online or in interviews has added to my book’s professionalism.

The one-on-one support, frequent check-ins, and extra guidance I received from the Reedsy staff were well worth the $50. But the ultimate value in the service is the review and how you choose to use it.

Connect with Ryan here and find out more about Reedsy Discovery here.

Find the perfect book reviewer for your next book

Find the right book reviewer for your book