Lara Coates’ debut crime novel was a work-in-progress for two years until she decided to take her writing seriously. It quickly became clear that a career in self-publishing would require professional support, so hiring a cover designer was essential in putting her best foot forward — the first step in establishing a brand for her upcoming series.

As a newbie author, my first step in gaining an understanding of a successful writer’s journey was a lot of online research and listening to podcasts. I discovered Joanna Penn’s blog and took to heart her advice on hiring a professional cover designer as one of the most important steps for any author who is serious about creating an author brand. She recommended Reedsy, and the simplicity of the process immediately won me over.

Finding the right designer via Reedsy was not only simple but also enjoyable: you select criteria (such as the service you're looking for, your genre, etc) and Reedsy auto-populates a list of professionals that meet your needs. You can then send free quote requests to a shortlist of five professionals. Each designer I reached out to took the time to respond and break down exactly what would be included in their offer. Beside this professionalism, both the author testimonials and the warranty of Reedsy’s vetting process meant I didn’t need to worry about getting ripped off, and I could concentrate on the cover itself.

Hiring a designer who wanted my book to stand out

From my shortlist of Reedsy professionals, I decided to go with Xavier Comas. He was one of the first designers to contact me, and what immediately stood out to me was the thought and effort he put into his response before we even agreed to work together. Xavier understood what I wanted, and clearly knew how to achieve it — hiring him was a no brainer for me.

Once I had accepted Xavier’s offer, he asked me to send him further information about my book: key elements in the story, objects that played an important role, and a description of crucial scenes with visual potential. I also created several vision boards of book covers for Xavier. They included a lot of the things you typically associate with crime thrillers: big, bold letters, knives, etc. Xavier pointed out to me that we could create something a little more fresh and original while also letting readers know the genre instantly.

When Xavier sent me the first concept, it blew me away. It was nothing like I imagined but everything that I wanted. The use of three colours — yellow, black and white — created a harsh and violent look that was visually enticing. The design was unique and stood out of the crowd, yet clearly signalled crime thriller. 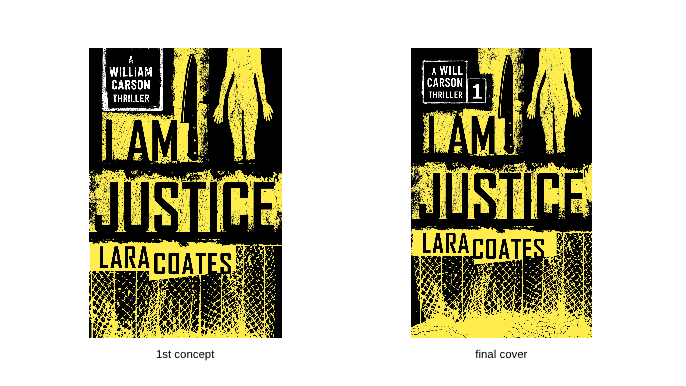 When I showed Lara my concept for I Am Justice, she liked it so much she approved the first draft right away. Usually, I show authors several ideas, but in this case, both Lara and I felt really strongly about the original idea. Of course, there was some fine-tuning, such as color hue or typographic composition, but the initial concept was pretty close to the final cover.

Throughout the design process, I kept in mind the fact that this was the first book in a series. A recurring issue many publishers and authors face is: how to create a coherent series design, while ensuring it's versatile enough for each title to stand out on its own? A common approach for differentiating between the titles is color change, but Lara and I put our own twist to it and decided that the stark black and yellow color palette would remain consistent, and each cover would feature a new, prominent story icon instead.

As the packaging of the story, book covers play a crucial role in marketing. But they also do a lot more than that. They serve as the bridge between an author and readers, establishing an instant emotional connection with the book. Personally, I believe a good cover tells a story of its own.

An instantly recognizable cover style for my series

With Xavier’s help, I now have a professionally designed author brand across my books, website, and social media. The reader response for the cover has been incredible, and hopefully, once I have published a few more books in the series, readers will then be able to recognise my work on the shelf based on the cover alone. Of course, I will be hiring Xavier for the next books in the series.

Hiring a designer is an investment, but I like to think of it as an investment in myself. I respect my readers and only want to provide them with a professional, quality product. I want my readers to see that I am taking my writing seriously, and the cover is part of the author brand. My advice is not to skip this part of the publishing journey. People really do judge a book by its cover.

Buy I Am Justice here and hire Xavier for your book's cover here.

Made with help from Xavier Comas