When it came to publishing her debut novel, Made of Darkness, Erica M. Kim decided to take the self-publishing route rather than risk failing at the hurdles of traditional publishing. With her book she wanted to shed new light on familiar archetypes of gods in the paranormal romance genre and turned to Reedsy for a cover that would attract and convey her unique story.

As an indie author, I was worried to trust my cover to a stranger

When I decided to self-publish my novel, I knew it was critical to hire a professional cover designer. In today’s digital age, competition for the consumer’s attention is fierce. In fact, I’ve read studies that show brands only have milliseconds to capture someone’s attention, so why would this be any different for an author drawing in readers? I realized that in the competitive marketplace of publishing, the saying “Don’t judge a book by its cover” may not be good advice for an author.

My first step in finding a professional designer was to research the options for indie authors. A Google search provided me with a few freelance designers, but I quickly began to worry about trusting a complete stranger with such an important project. How could I know they were reliable and credible? What if they ran off with my money? What would happen if they didn’t execute my vision adequately? Luckily, Reedsy had the answer to all those questions.

Hiring a vetted designer through Reedsy

Because Reedsy vets their professionals and acts as a mediator in the case of disputes, I could instead focus on the creative side of things when choosing a designer for my book. I had a specific vision for the cover and knew I didn’t want to use stock images — despite their prevalence on covers in the fantasy genre. So it was important to me to find a cover designer who could create a custom illustration. In the end, I chose to work with Natasha MacKenzie because her artwork was visceral, beautiful, and detailed, and I felt confident that she could execute my vision.

One of my soft spots within fiction is the fantasy genre as it can allow a designer's creativity to run wild. When the tone of Erica’s novel reminded me of The Night Circus with a few Buffy the Vampire Slayer characters thrown in, I knew I could create something perfect for her.

For fantasy covers, it’s all about the fonts, and creating a sense of whimsy. Painted illustrated covers, such as A Court of Thorns and Roses, are really big at the moment, so Erica's request for an illustrated cover was spot on.

Once Natasha and I agreed to partner up, we started the process by creating a mock-up of concepts. I sent her a few chapters that established the tone of my novel, and also provided her with my main character’s physical description for the illustration. Based on the direction I provided, Natasha drafted the first concept mock-up. However, after doing some market research, I pivoted significantly from my initial idea and Natasha very kindly produced a second mock-up that hit the mark. From there, we moved on to working on the most important part of my cover: the actual illustration. 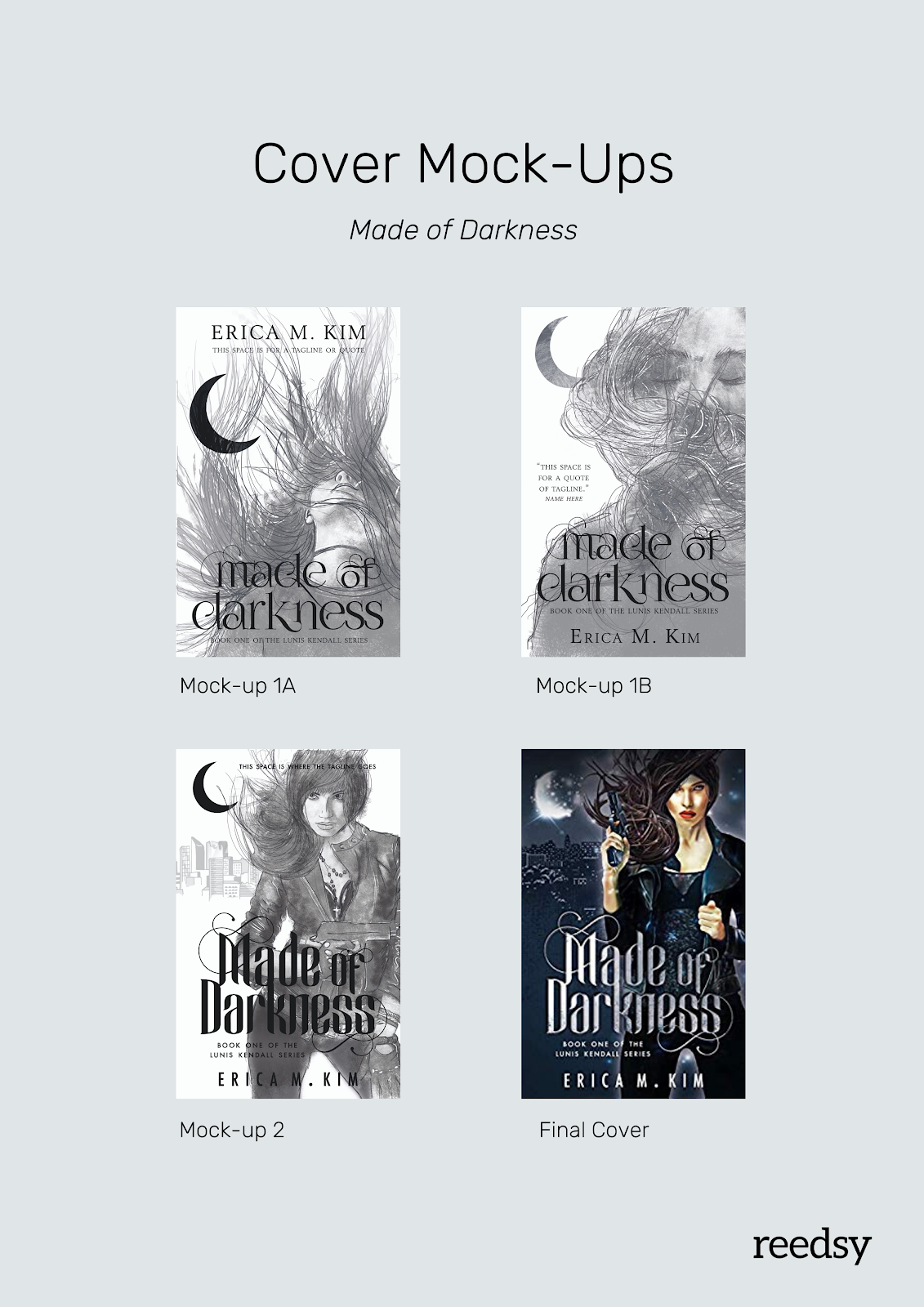 We went through several rounds to get the illustration of my main character right. Each time, I provided example photos or descriptions of my ideas. The way Natasha implemented my feedback was truly impressive, and each revision was done with great accuracy. Throughout the process, she was patient and professional, and her communication was excellent. It was so easy to work with her and I’m immensely grateful that I found her. The final artwork is really better than I could have hoped for.

My fantasy cover can now compete in a crowded marketplace

Going back to judging a book by its cover, I believe my cover art can now compete in a crowded marketplace. At a glance, Natasha’s design evokes my unique story, capturing the dark themes of the book and the main character’s essence perfectly. I think her illustration definitely played a role in Made of Darkness scoring a feature in the Reedsy Discovery newsletter.

You can have a truly amazing book, but if your cover isn’t suited to your story, your audience will have a very tough time finding it. Creating a cover that brings an author's story to life, like Erica's, is an amazing feeling for a designer.

If you take your book seriously, you need to invest in it and get your book the cover it deserves. Through my journey of trial and error I found Reedsy, and I highly commend the platform for vetting each professional individually, and for providing a sense of security for writers. Natasha was the highlight of my publishing journey and I will 100% hire her again for the upcoming books in the series.

Check out Made of Darkness here and hire Natasha to design your cover here.

This book was made with help from Natasha MacKenzie