Lost but not Forgotten

Submitted into Contest #79 in response to: Your main character is approached by their long-estranged parent who wants to reconnect. How do they react?... view prompt

The ebony door stood between me and a pending confrontation. My hands, which had met every adversary with great resilience fell, knocking that door turned out to be more taxing than ever before. As soon as I heard movement, I scurried to the dining room. I waited for Gina to make an appearance, but she never did. It must have been a false alarm. I have been walking on my toes since Gina came to me yesterday. She was no longer the well dressed, soft spoken socialite. It was evident that she had taken a few wrong turns since she left my father. She should have taken the money that my father threw at her. Either her pride or disdain for my father kept her from taking the money. My father always left a trail of broken people: humiliated and torn. Gina became one of them and I, a secondary casualty.

When Gina came to me after thirty years, she was as recognizable as any other homeless vagabond. No more manicured hands, weekly salon appointments or expensive diets, just a bundle of scratchy skin and bones. I was lost when Gina left me alone in this huge house. She never tried to become my mother. She must have known that she would do a poor job; she was less maternal and more material. But she was the best step mom a girl could ask for especially one with a selfish father. She was the best dressed parent at every school function with amazing hair styling skills. I was voted Best Hair in primary school three years in a row. Above everything she would listen to the silliest things I had to say. As a kid, I had hoped that Gina would return or at least call me but she disappeared. What returned was a disappointing apparition of the glory that I knew long ago.

“I smell eggs,” said Gina as soon as she came into the room. I watched her pounce on the eggs. I watched her yellow teeth noisily chew and long blackened nails which called my attention to its sorry state. I saw her closely after a long time, hence manners were forgotten and I stared. I saw the sores and boils on her face and body. The pantsuit she borrowed from me did not improve her look. I thought it degrades her more as there weren’t any more layers of rat bitten ‘homeless’ clothes. She probably does drugs too, I thought. I turned my head away in disgust; disgusted with myself for in that moment I proved to be my father’s daughter: assuming and judgemental.

“You are very quiet…,” she said with food still in her mouth. “You never stopped talking—”

She only nodded, her eyes never leaving her plate of eggs. The rest of the meal was eaten in silence and Gina did not look like she would be finishing up soon. So, I called in sick to finally have a conversation with my ex-stepmom.

After a moment of hesitation, I pulled Gina up on her feet. Her hands were bonier than I remember, more veiny but familiar. For a minute we were walking in the downtown mall to get Gina’s hair done. Then I was back and the present Gina hadn’t stepped into any mall for almost a decade.

I did not see Gina the entire day. As I sat on my couch, my thoughts were running wild. Yesterday before she went to bed, Gina had told me she needed my help. Today, Gina won’t even meet my eye. Could she be ashamed of seeking my help? Or she found comfort in my soft blankets and plush pillows and was hesitant to let go, tougher to return to the bleak streets. What help does she need? Money, of course. She must be in a real fix in order to come to me after thirty years. Was she turned away from all other avenues and came to me as a last resort? Ah, I think too much. She will not be my problem come tomorrow.

“Is there something to eat?” said Gina startling me. “I slept through lunch, didn’t I? I don’t follow a routine these days.”

“There is some fruit. I could fix you a sandwich—”

“That apple looks lovely. Don’t trouble yourself. I am fine with fruit,” she bites into the apple and signs, “This is one good apple. Farmer’s market, isn’t it? There is no good fruit from where I come from—”

Where do you come from, Gina? And what do you want from me? I thought.

“—The shopkeepers give away fruit-feeling all holy- slimy grifters, all of them. It is overripe and squishy. Is that a way to treat a fellow human? ” She does not wait for my reply, “I take it back. Not everyone were grifters. Mr Kamal gave us the best fruit among other things. Sadly, he died last year and his girl… I am not sure that she is his spawn, chases us off if we step foot near her shop—"

I don’t want to listen to your homeless adventures. Tell me, why are you here?

“Oh, I need your help,” said Gina meekly. I did not realize that I had spoken out loud.

Feeling ashamed, I said, “I did not mean to be rude. It is just that… I have work tomorrow and there is no point in delaying this.”

“I don’t want to waste your time. But I need your help. I don’t have anyone else to go to.”

Gina was gnawing her teeth and fidgeting with my pant suit sleeves. She hadn’t spoken a word yet and I was growing impatient. I could have given her more money than she imagined just to get her out of my house and life.

“It’s money. You knew that. I am in a tight spot, kid. I borrowed money from some folks to help a friend and neither he nor I, am in any position to return that money. These are some bad people. They have held my friend as collateral. If I do not bring them the money, they promised to gouge his eyes out. I need a five-thousand…”

“I can do that,” I watched her face relax. I did not trust every word of hers, but I was convinced that there was some truth. “Why don’t I buy you a van. It is only a little help. You will be able to move more and make some money,” And you can drive away from me.

“You are kind. Thank you,” she said and went to bed. I had expected more resistance, but we both got we wanted, she, the money and I will soon get rid of her.

“I almost forgot…” Gina was back with an untidily tied package, “It is those hard-boiled sweets, you used to like. You can hardly find them these days, at least not the original. I wanted to give them right away but didn’t know whether you liked them anymore,” she looked at me unsure, “Please, do take them—”

I was busy sobbing on the couch to take part in the conversation. It had been a long time since anyone had remembered my likes and tried to act on it. I had forgotten how that feels. In addition to that feeling I was overwhelmed hence the heavy sobbing. Gina sat on the couch. A gap owing to the lost years between us but our hands held onto each other. We could be mother and child again or some version of that. 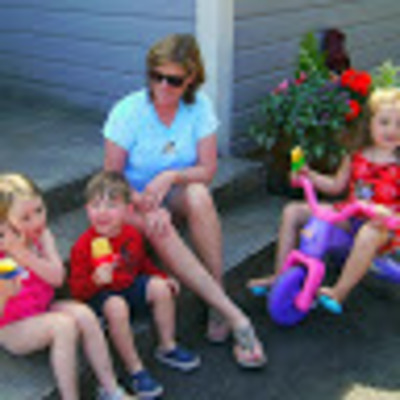 Hi Girl Good showing the sad changes in her stepmother. I like the end especially where we learn she loves and accepts her. I felt the protagonists frustration! Thanks for writing!