Submitted into Contest #27 in response to: Write a short story about a jury of people tasked with making a decision. (It doesn't necessarily need to be a court jury.)... view prompt

A small group of people assembled at the side of a country road by a field on the outskirts of a village. A sign read RUNNING TRAINING MEET HERE. Most of the group were waiting for the road-train, but one lady with a shopper bicycle was waiting for the butcher, since she had misinterpreted the sign.

The rest of the group were laughing at her. Silly Miss Terri! They all knew each other, since they all lived in the village of Little Running. They were waiting for the train to take them into the nearby town of Long Running. The members of the village council were all travelling on the train, as they planned to have a meeting. They had to make a very important decision about what to name the road-train, which was a new transport link for the two places.

The little blue road-train arrived and they boarded. The council members all sat together. They had a specialist decision maker with them, Mrs Grundy. She was wearing a very neat baby pink suit and holding a very large notebook and a very smart pen.

“Ooh look at her cool biro!” whispered Miss Jane Palmer to her friend Mr Smythe. He glanced across at Mrs Grundy and admired the pen with its gold lettering along the side proclaiming MADE IN BELGIUM.

The train passed the sports club, which proclaimed Running Race Relations – can your aunt beat your mum? A game of cricket was in progress on the field. They could see Bev Joycott in bat, and that the game so far was 79 inns for 2 runnings.

They admired the view across Running Down.

They passed the cemetery with its sign RUNNING LATE.

As they passed the Running Wild Life Park, they saw all the festival tents, with naked figures and a huge stage where a band was setting up. Their faces showed disapproval of this unconventional and too modern sight.

They were nearing the town and saw the sign on the car repair shop RUNNING INN - REFRESHMENTS AVAILABLE WHILE YOU WAIT.

As they came into the town bus station, around the town square they saw several shops including Running Shoes and Running Dry Cleaners, also the Running Greengrocer, which specialised in runner beans (but the lettuces have bolted).

There was also Running Well Womens Clinic. (Walk in) and the Running Hot Sauna, and of course a nice pub, which was called Running Free House, and has a sign depicting a house on legs.

On one side of the square was the imposing Town Hall, where people were running Running, and where our village council would be meeting with the town council.

Further along the road, at the back of the Town Hall, there was a supermarket, and a cash machine that all the locals referred to as running out. (when they were running out of cash, the machine would give some out to them)

Disembarking from the road-train, the council members walked purposefully to the Town Hall for their meeting, Mrs. Grundy's baby pink stiletto court shoes clacking on the paving. A uniformed man held open the heavy glass door for them and they entered a foyer with a tiled floor. A large polished wood reception desk was across the foyer and the receptionist greeted them politely and gave them directions to the meeting room.

In the meeting room, several people rose to welcome the village councillors. Everyone sat back on plush chairs around a formica conference table. There were jugs of water on the table and a glass per place. Mrs. Grundy frowned as she noticed twists of lemon in the water. She preferred hers plain, thank you very much. She was also not happy that one of her stilettos had caught in the fibre of the carpet beneath her foot. She dislodged her shoe from the entanglement with a small tearing sound, which alarmed the chairman but he said nothing, since he knew her reputation and to be honest he was a little scared of her.

Introductions over, the meeting commenced with the minutes from the last meeting, and then onto the main item on the agenda – what to name the blue road-train.

Choo Choo Puffa was dismissed as being too silly as well as sounding like a cross between a dance and a cereal box. And anyway the train didn't either choo choo or puff puff since it ran on electric.

Green line was the next suggestion. “But it's blue!” was the instantly almost universal protest.

Blue line then was the next suggestion. No! That reminded them of a tub of margarine.

Buttercup! No! Smooth Running? Hmmm that was a possibility. But it did sound a bit like an ironing service. Running Smooth then. Better. They would keep that in mind.

Suggestions flowed back and forth, some better than others, and a shortlist was written up.

Running To and Fro.

Then someone remembered that the golf club was already called Running Around, and the Mothers Union was already named Running To and Fro.

Mrs. Grundy rose, looking formidable in her pink suit. She opened her mouth and the sound did not match her cute outfit. Her voice boomed. “I have reached my decision. The only sensible name is The Blue Train.” She glared around the table, challenging anyone in the room to contradict her, and of course nobody did. After all they were paying for her excellent decision making.

The chairman banged his gavel. “Alright then. That is decided. The next item is finances – Running total, Mr. Treasurer please.... “

The rest of the meeting passed quickly, there was no other business and it was time for lunch.

They went to the Running Free House nearby, where they had booked a meal.

The chef came running out, apologising profusely. “I'm so sorry” he said. “I have had to change the menu somewhat. The green beans have run out and the lettuces have bolted. I went across the road for chicken and they had forgotten to put any aside. I wanted Charlotte potatoes but someone had already bought them all. I thought of substituting steak for the chicken but that had all gone too. In fact, all I could get was some turkey mince, some instant mash and cans of peas. I don't know what this town has come to today.”

The council were disgusted by this news and decided to not bother with the meal, but they were happy to indulge in some wine before they left. The waiter brandished the corkscrew with a practised flourish. The wine was very good and everyone felt appeased although pretty hungry. Cheese and onion crisps were not an adequate lunch.

However, they made the best of things and happily boarded The Blue Train to return to Little Running.

Mrs. Grundy looked pensive throughout the journey and on arrival back at the village she called for an urgent meeting.

“I have solved the mystery.” she announced.

“What mystery?” wondered everyone else.

Mrs. Grundy twirled her cool biro made in Belgium.

“At the beginning of the day” she began “Miss Terri was seen with her bicycle, waiting for the butcher. She was mocked, but she was underestimated. While we were in our meeting, Miss Terri rode her bicycle into town, and it was her who bought the chicken and the steaks, also the charlotte potatoes. That is why the chef could not produce our meal. She is a Mystery Buyer. And I'm sure that she has also put the purchases to good use. I can smell barbecue. Let us proceed to follow our Running noses and find our lunch.”

The smell soon led them to the garden of Miss Terri. Mr. Smythe was particularly gentlemanly and addressed her as “Dear Miss Byre,” and kissed her hand, continuing “We are so very appreciative of your generosity.”

The barbecue lunch was magnificent, and all were happy with the outcome of their day. 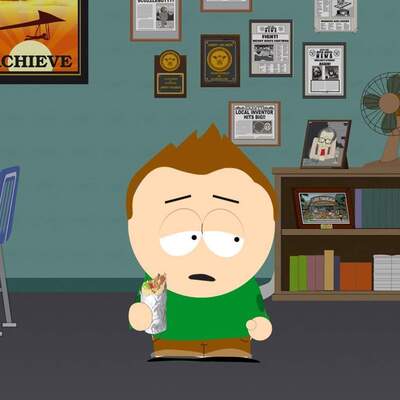 I would have like to see more personality from the characters. For example, "which alarmed the chairman but he said nothing, since he knew her reputation and to be honest he was a little scared of her." This was a great opportunity to bring both the chairman and Mrs. Grundy to life with an anecdote. Maybe something like, "The chairman was alarmed, but said nothing. The last time he'd mentioned Mrs. Grundy's shoes in regards to preserving the carpet, she threatened to leave one in his backside." Or something more fitting to her behavior.

Thank you, that's a really useful idea to bear in mind for future stories. In this one though, he knew her reputation only, nothing more, but that was enough to scare him. Perhaps I could have put it in a better way to make that more clear.