“We have plenty of time,” Sophie had muttered to Kara under the early morning sun that first day. Kara had closed her eyes and with a smile pressed to Sophie’s neck, she dreamed of music and love on a deadline.

A year can be as long or as short as you make it, and that’s been something Kara’s been thinking about for a while.

For most of her life, her years moved quickly, like when you’re standing completely still on a moving train while the world flashes by through the tiny porthole of a dirty window. Her life had been mapped out for a long time now - she earned the grades in school, worked an internship after class, made the right connections through her family. Her parents had been hinting at introducing her to a son of their friends, a young man applying to Pre-Law.

Like a rocket waiting for a match, the rest of her life was ready to launch.

But like many children Kara’s age - legally an adult and mentally so far away - she had her doubts. She had so many doubts she couldn’t see straight. And despite how she felt about it, the state university was waiting for her, just a few miles outside of her family’s subdivision.

Her freshman year she was supposed to commute from home before moving onto campus.

(Her parents had explained the practicality of this, simply telling her that she wasn’t ready for the big world yet.)

And such a big world it was.

The thing about Kara is that outside of her good grades and perfect resume, is that she’s also great at bass guitar.

It was something that she picked up in late elementary school - she had stayed home from school one day on account of a cold and without her parent’s supervision decided to turn on some TV channels that were normally off-limits. And one of those channels was about rock and roll - young bands travelling the country, writing music, living artful and edgy lives.

The next day, she asked her parents for a guitar. At first they were unsure, thinking she should focus on piano lessons instead, but after weeks of her asking so sweetly they had gone out and bought her a bass guitar without really knowing the difference.

She didn’t risk asking them to trade for another - they were just as likely to simply return it and consider the matter dead - and she learned to play bass guitar. And she was good at it - really good.

It was a skill that she didn’t share with anyone for the longest time - until she was seventeen and first met Sophie.

Sophie was eighteen years and a million lifetimes old. She possessed a babyface, beautiful dark kinky hair, and a thousand-yard stare that belonged to someone much older. Kara and Sophie met by chance at a coffee shop where Sophie was playing guitar and singing into a mic for tips.

“Is that a Stratocaster?” Kara had asked her after her set, finding the other woman drinking coffee while leaning against a bookshelf with an edgy sort of nonchalance.

“Your parents buy you that?” Kara asked, leaning into Sophie’s orbit.

It was a few nights later that Sophie admitted to Kara that her parents didn’t know where she or the guitar were. That she and her parents had the sort of misunderstandings that led to her leaving home real young, staying with her uncle until he died.

“I miss him. And it’s hard being alone. But it’s good to know that now that I’m an adult, no one can get me,” she said softly, bitterness pulling at the edge of her smile.

Kara had kissed that look off her face for the first of endless times.

It was established without saying anything that they were a musical duet. They auditioned for bands together, played jam sessions during any empty afternoon, listened to each other’s favorite tapes... They made music and kissed and held hands and Kara decided it was the best thing she ever had.

Inevitably, she blurted out to her parents that she didn’t want to go to college.

Her mother laughed at that - a big red flag because her mother did not laugh very often. Her father turned an interesting shade of anger - a swirl of consternation, rage, and exasperation twisted his face like a hurricane.

That night was a long one, full of screaming matches and dead-end negotiations. It was difficult for her to explain her reasons without giving away her secrets - they didn’t know about Sophie, barely knew about bass guitar - and Kara ended up wondering if they knew about Kara. Who did her parents see when they looked at their daughter?

It was close to midnight when the two parties came to a compromise: Kara could pursue music for a year.

If by June 1st of the following year her music career hadn’t blossomed, she had to come home.

Kara walked the stage of her highschool graduation and then a day after that, her life turned inside out. She moved in with Sophie and days spent reading textbooks and polishing her applications turned into never-ending practice sessions with Sophie and playing for local bars.

Soon it became apparent that they couldn't get the job done staying in their town.

Sophie drove an old car that used to belong to her Uncle before he gave it to her. She took Kara’s hand one evening and suggested that they go on the road.

“There’s several auditions I got us in, but they’re in other states,” she said, “We could travel around the country. Get to know people in the music industry.”

Kara agreed in a heartbeat, ready to get out of her hometown. The next months of their lives were spent travelling from city to city, looking for the next potential big break. Crashing in on a couch in Brooklyn, sleeping under the starry sky in Minnesota, crammed together in the back of the car more nights than not.

“How do you even find out about this stuff, like auditions?” Kara asked one evening, watching Sophie type away at her old laptop. They were laid out together in the back seat, Sophie leaning against Kara with the computer in her lap.

“Sure,” Kara said casually. Her eyes were closed, she could easily look and see what Reddit page Sophie was finding this stuff on, but if she looked at the screen she would see the tiny little date in the corner, the stark reminder that she only had some months of freedom left.

She didn’t doubt that she and Sophie could remain together after the year was up, especially if they spent the summers together. But this wild freedom of the open road, the directionless meandering they indulged in when nothing was happening, finding little spots of comfort in a wild and uncontrollable world... This was what she would miss when the time came.

Sophie leaned back on Kara’s shoulder and only then did the other woman concede to open her eyes, to see her girlfriend’s soft and lovely face give her such a warm look.

This life wasn’t like the gilded images of those documentaries she saw as a child. The glorification of what it meant to be a young travelling broke artist was misleading - no one ever discussed the difficulty of looking for a truck stop with showers, the diet of gas station snacks and shitty coffee, how cold or hot a car could be when it was where you slept. Sometimes the people they met in small towns were interesting and memorable characters, and a lot of the time they were just boring in the way that most people are.

Worst of all - the gigs trickled in, the auditions flatlined.

Soon they had to get a job - not playing instruments, but instead as roadies, carrying the equipment for a travelling band. They briefly entertained the notion that maybe if Kara did go to school she could study music, network her way into a valid music career, but the idea of going back to reality and leaving this freedom behind so soon seemed unbearable.

Besides, being a roadie wasn’t so bad. Kara thought that putting the instruments aside for what was essentially manual labor would have been heart-breaking but in the end, a job was a job. And bringing home a little extra money with Sophie was nice, they were actually able to have proper dinners. They were even considering renting an apartment in one of their favorite cities for in-between tours.

The music could wait, Kara decided.

But some things seemingly couldn’t.

On the road in Arizona, Kara got a text from her mother - June 1st.

June 1st was a few weeks away.

When she told Sophie, she saw that look in her eyes that said her girlfriend was putting her guard up.

“Well. I guess we should head back anyway,” Sophie said in a carefully diplomatic voice, “Not like we’re getting much success in our music careers.” They both winced guiltily. At this point, their instrument cases had become sarcophaguses for their untouched instruments.

Dinner was quiet, just the two of them leaning against the truck, eating leftovers while looking out at the open night sky. Kara wondered idly if Sophie was considering an escape route from Kara’s life. If Sophie was going to continue with the tour, let Kara return to a life of structure and rules all alone.

Those thoughts broke apart when Sophie reached over and grabbed Kara’s hand gently, rubbing the space between her thumb and index finger with fond gratitude.

The night was so bright, here in the middle of nowhere - like someone knocked over a can of stars and never bothered to clean it up. It was unbearably beautiful against the deep dark sky, and in front of them lay a stretch of cold desert reaching somewhere close to forever. How could she leave this freedom behind?

The epiphany swelled inside of Kara.

She couldn’t leave this behind. And once she realized it, everything was clear.

Kara smiled to herself, a childish giggle threatening to escape. She took out her phone, messaged back to her mother - see you at christmas.

Still smirking, she held it up to Sophie, whose eyebrows shot up with incredulous joy. The phone immediately began to buzz violently, an angry wasp quickly disabled with a press of a button. Kara put the dead phone in her pocket and leaned onto Sophie’s shoulder, smiling openly at the great big mess of a world in front of them.

If the music could wait, so could the rest. 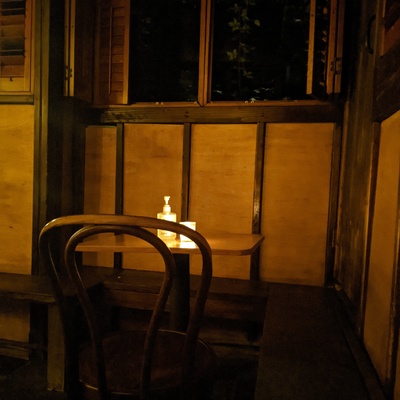