Part 6 – An Insider's Look at NaNo

A Writer's Insider's Look at NaNoWriMo

Shaelin Bishop is a writer, YouTuber, and a member of the team here at Reedsy. She’s also a veteran of the 30-day novel writing competition NaNoWriMo, having taken part in it for five years. In this lightly edited transcript of her video, she reveals her personal experience with the competition. 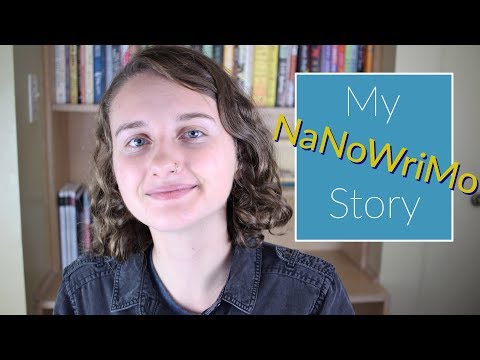 Reedsy's @shaelinbishop shares her experience as a 5-time #NaNoWriMo winner

At the time this is published, it's near the end of October. If you're doing NaNoWriMo, you're probably pretty ready to go and have done most of the prep or all the prep you wanted to do.

Unless you followed me on my personal channel way back when I was doing NaNoWriMo (which was a very long time ago), you won't have heard me talk about my own writing journey. With November just around the corner, I thought it would be a good opportunity to share my NaNoWriMo journey and just talk about the benefits it had for me and how it shaped me as a writer.

I did NaNoWriMo five times: every single year I was in high school starting in 2010 when I was 13 years old. I saw the term float around on random social media. I looked it up, and as soon as I realized what NaNoWriMo was, I was like, "That sounds awesome. I want to try doing that."

At the time I was writing a novel. Instead of waiting until next year (because when you're 13 that seems so far away), I made an account, and I signed up. I was using the Young Writers Programme where you can set your own word goal. I just set my own word goal for 15,000, and I did NaNoWriMo for like one week and that was my first NaNoWriMo experience.

Create unique and believable characters for your NaNo novel. Enter your email to receive your copy

When the next NaNoWriMo came around, I was still writing the same novel from the year before. This was my first ever novel, and it took me two NaNoWriMos to write. Once again, I set my own word goal — I don't remember what it was, exactly. I think it was 30,000. The last 30,000 words of my book. This first novel I wrote took me two NaNos: one NaNo, a year of writing slowly and then a mad dash NaNo at the end. The result of those two years was called Silver Bird. I don't really want to talk too much about what it was about. A girl was stranded on an island. It wasn't good.

But those first two NaNoWriMos taught me that I could write a book. I think that's what NaNoWriMo does for a lot of people who have never written a book before, or who have tried but never finished. That's certainly what it did for me. Having the community and the productivity push is what allowed me to do it, but it showed me that I can do this outside of NaNoWriMo.

In between that NaNoWriMo of 2011 and the next one of 2012, I wrote another book. When the third NaNoWriMo came around, I had just finished my second book like a month before, and now I was going to write a sequel for it.

This was when Dystopian Young Adult was all of the craze, and I was reading so many of them. So I too set out to write a young adult dystopian novel. It was not the best fit for me because there was a lot of action involved, and I'm not very good at writing action. But again, that's kind of the beauty of NaNoWriMo: it forces you to just write what you set out to — even if you're not good at it.

I would find so many random points in the day to write. I would bring my laptop to school. I won NaNoWriMo again that year (I always won NaNoWriMo). The first two NaNoWriMos I did were with my own set word goals, but I did reach them. And then the last three times I did NaNoWriMo, I wrote the 50,000 words.

Starting half-way through a novel

Going into NaNoWriMo of 2013, I was part of the way through a novel, and I thought, "This is great. I'm going to write the last 50,000 words of it for NaNoWriMo." I think in retrospect, it's actually harder to do it this way. Halfway through writing, you are in the middle of the book, and you've probably lost some momentum. The middle of the book is hard. Ultimately, it was more satisfying at the end of the month when I started in the middle because then I would get to the end.

That NaNoWriMo I wrote the last 50,000 words of a 90,000-word manuscript. It's is a novel that I'm still — let's say it's not shelved forever. That novel was called The Definition of Impossible. It's a weird kind of gothic horror thing. No one, including me, has ever been able to know what genre it's in. Now, the version I wrote for NaNoWriMo was not very good. I don't think it was bad because I wrote it for NaNoWriMo. I think it was bad just because I was young at the time, and I didn't know what I was doing.

Planning for my final NaNo

The last NaNoWriMo I ever did was in 2014. This was my last year of high school, but this year I decided to try something different. I had always "pantsed" my novels. I had never worked from an outline before.

Being involved with the writing community more and more so just because of NaNoWriMo exposed me to different ways of writing a book. I thought I would try outlining, something that I had never done before.

This novel was called Chain Reaction. It was really difficult to write because the main characters are way smarter than me, and they're scientists. My education in science was Grade 11 physics and Grade 11 chemistry, so I wasn't exactly at the caliber of my own characters. Chem was the worst grade on my high school transcript, so this really wasn't my area of expertise. But again, that's another good thing about NaNoWriMo: it forces you to write the thing that's out of your comfort zone. The content was so difficult because it was so sciencey.

Did I do a good job writing it? I definitely didn't, but it forced me to just do it. I could have sat with that book in my brain for my whole life and gone, "I'm never going to be able to write this because it's too hard, and I don't have the knowledge basis for it." But there was this challenge here: I had the story in my head, and so I wrote it.

I finished NaNoWriMo on the 23rd that year because working from an outline just made it so much easier. At that point, I was really good at knowing how to fit it into my schedule. The book was short. Way too short at 53,000 words. But it was satisfying that year to write a full book start to finish. That was the entire novel in 23 days, one that I'm also still working on in 2018.

And that's my NaNoWriMo story.

What has your experience with NaNoWriMo been like? If you have any questions for Shaelin, or thoughts on this annual competition, drop them in the comments below.