The Path From the Past to the Future

The room was large. Everything in it was large. Lavish furniture surrounded me, paintings hung on bright colored wallpaper, tall green plants reached toward the sun at windows, through which a rosy sunset light was cast over the room.

It’d been so long since I had been in this room, in this house. Nothing had changed but the owners. Each settee stood in the same place. Some of the paintings had been replaced, family portraits interchanged with colorful landscapes and still lifes.

Memories of this house were surrounded with wistful hues, dancing beams of childhood happiness and fond friendships tinging the edges.

Now, I was out of place. I was small in this large room, with its large furniture. My presence seemed to shrink until I wondered whether I was not a child again, a child who knew all those cheerful memories could turn bitter, that fond friendships could wilt and die.

This would be the last time I would be in this house. I would never allow myself in, on traces of hope that all would return to what it once was.

Yet the house remained the same.

The faint clicking of heels on tile was what warned me, and so I stood to greet my host politely, feeling slightly empty, detached.

She swirled into the room, swathes of lilac and plum surrounding her, golden hair pinned to her head. Her face did not bear a smile, exactly, but a sort of amused expression, as though she knew what you were thinking and she found it humorous. As though she knew the deep secrets of your heart and thought them trivial.

I had loved her once. Or at least, I thought I had.

She greeted me warmly, offering her hand to me, and I took it, with all the emotion I could muster.

Remnants of the past hid in her not-smile, in the way she carried herself and the confidence that hung about her. She had always been that way.

It was the glint in her eyes, the tact of her manners that was different.

I wondered now, as we sat together on the settee, if I had ever loved her.

She had never loved me. In each other we had found firm friends, companions from our young years and on towards adulthood. But she had never wanted to marry me.

Perhaps that was where I had gotten confused, in between those lines of friendship and love, deceived by what ought to be and what reality provided.

“I’m glad you came,” she said, polite as ever, though I could see the resentment in her eyes, could hear the lie in her voice.

“I wanted to see you one last time.” My voice betrayed what my mind could not feel. It was wispy, as though it didn’t want to be there, as though it hid something that would be revealed if I spoke louder.

“Last time?” she echoed to me, tilting her head. It looked innocent enough, but I could see her thoughts turning, her eyes analyzing, her brilliant mind jumping ahead to millions of possibilities.

“I thought it would be best,” I murmured. “You have lots to do. An estate to run, I’m sure that you’ll gain a wonderful position--”

“You’re not even coming to the funeral?” Her voice was flat as she looked at me, as though she wasn’t surprised but she hoped to feign it.

“No.” Only a slight hesitation separated my answer and explanation. “I’m leaving. I’m going to travel for a few years. Then I’ll come back.”

I looked up, meeting her curious brown eyes. Silently we sat for a moment, the quiet wrapping around us in a gentle embrace.

Her mouth opened, and yet she hesitated.

“Take a walk with me,” she suggested. “One last time.”

It could have been considered a strange thing to ask, but then again, she had always been strange, and I would never try to understand the inner workings of her mind.

I stood and offered her my hand, and she slid hers into it as she rose to her feet. Her hand slipped against my elbow as we walked from the room, into familiar hallways that stretched through the house.

Large doors opened for us, and we moved quietly from indoors to out, where birdsong and gentle breezes rose to greet us.

Nothing here had changed either.

The same stone pathways spread before us as they had when we were young, when we had run at full speed, scrambled up trees and played beneath the imposing trees.

Flowers bloomed along the path, purples and pinks, blues and reds looking towards the setting sun, which peeked over the hedges at our footsteps through the gardens.

Not a word was needed as we walked through the familiar paths, and so not a word was said, each of us lost in our own thoughts.

Though I had arrived little more than an hour ago, it felt like this walk had started when we were young, first dashing across the grass, and it was finally coming to a close now, as our heels pattered against the moss-lined path.

Everything had changed as we moved from the beginning to end.

“Good luck,” was the last thing she said to me as we stood in the entrance of the house, the smell of fresh air still hanging around us, the glow of the nipping breeze lingering in our cheeks.

I wished her the same, despite knowing that she didn’t need it, that her skills and brilliance alone would take her wherever she wished to go. There was no need to exchange lengthy goodbyes. The connection between us had long since disappeared, and I was merely a common guest in her household. There was no need to wish to see me again soon, for we both knew that long lengths of time would stretch between this meeting and the next.

A feeling of finality settled over me as I slipped into my vehicle. It was the end of something, as though I teetered on the edge of a precipice, and as we passed through the wrought gates of the estate, I turned back. To look one last time at the home of my memories, the house of my dreams.

She stood in front of the doors, a figure in purple, one hand raised in farewell, as still and emotionless as a statue.

It had been many months since I had seen her last, and it would be more than that until I could ever see her again.

I knew that in that time much would happen. We would grow, change, make places for ourselves in the world, and create new memories, mark new experiences in the barely-filled pages of our lives.

And I would always wonder if I loved her. And if she ever loved me back. 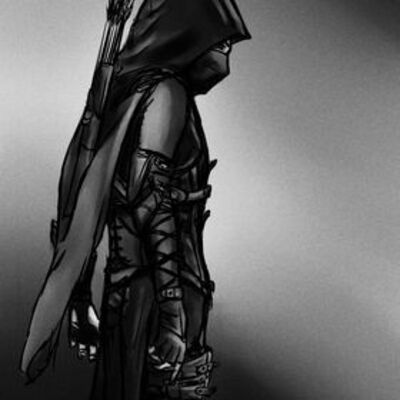