When Sam offered for Brooke to stop by his apartment for a bite before work, the last thing she expected was a table set with a home-cooked meal. As she followed him inside, she stopped at the sight.

“I figured you meant take-out,” Brooke said, examining the small, round table. He had already set the table with plates of spaghetti and salad, along with glasses of water for them both, all underneath red placemats. It wasn’t much of a set-up, but considering she rarely saw Sam eating anywhere other than standing by the counter in his kitchen, it came as a bit of a surprise.

Sam plopped down in the seat across hers with a shrug. “This didn’t take any effort,” he justified with a dismissive wave of his hand. “I promise it’s safe to eat.”

She rolled her eyes and sat in front of him, checking her watch as she did so. Sam assured, “We have plenty of time.”

Brooke took a bite of the salad. In the six years she had worked with Sam, she’d never seen him cook anything that required more than fifteen minutes of effort. It wasn’t that he was lazy – he was one of the most precise people she knew, which was partially why they were in their line of business together at all. But when it came to food, Sam took a break from his attention to detail and settled for low-effort meals. And Brooke noticed because it was her job to notice things.

“Do you have a relative coming over?” she asked, stabbing at her spaghetti.

“Yup, my great aunt Mildred. She visits every weekend – you haven’t noticed her around?”

“Smartass,” she said. Sam grinned at his joke. “I’m just trying to figure out why you’re all of the sudden a chef.”

“I boiled some pasta, Brooke. It’s actually not that difficult.”

If he wasn’t going to give a real answer, she wouldn’t push it. So she decided to bring up work. “You’re good with the directions for tonight?”

“Except for that time you took us to the wrong house –”

“That was two years ago,” he defended, eyes lighting up as he jabbed his fork towards her. “And it all worked out, didn’t it?”

“Not before that dog scared the shit out of you.”

“I haven’t made a single mistake since,” he said. “Unlike you. Remember last month when you almost broke that vase?”

“Almost.” She swallowed a bite of food. “And it wouldn’t have been the end of the world if it had fallen.”

“You never know.” He shook his head with a small smile and took another bite.

They continued eating in silence. That would have been perfectly normal for them, except Sam kept staring down at his plate. Not in anger – they had fought before, and neither of them was good at hiding when they were upset. So she didn’t know what was going on.

She told herself to ask him about it once they were in the car, but she realized he could easily dodge her questions until they arrived for work.

Brooke put down her fork and stared at Sam, waiting for him to notice. It didn’t take long. He glanced up at her with a raised brow.

He frowned. “No,” he said. “Why would something be wrong?”

“This meal is really weird.”

“You’re that convinced I can’t cook some spaghetti?”

He fiddled with his fork, averting his eyes from her. She waited. Then he met her stare again and with an almost pained expression said, “I guess I’m trying to impress someone.”

She blinked. Then understood. “Sam –”

“I know,” he cut off, putting his fork down on the placemat. “I get it. I know this is completely out of nowhere. Especially after six years of working together.” He shrugged, and his face was pinched with flecks of red. “But that’s six years that I’ve loved you, okay?”

“Sam,” Brooke said. “We can’t –” She stopped herself. In a softer tone, she continued, “We can’t be in a relationship with the work we do. You know that.”

“Think of how it would turn out in the long run,” she insisted. “It wouldn’t work. Neither of us has room for a relationship in our lives.” It was in the job description. Never linger too long in one place. That went for people, too – don’t get too attached. It just wasn’t smart. She looked down at her plate. “I’m sorry.”

He gave her a sad smile that so poorly replicated his usual that Brooke almost wished he would just frown. “You don’t want to consider it?” he asked, the barest hint of hope in his voice. “Not for a second?”

Sam nodded, then checked his own watch. “We should get going.”

He got up and took both their plates to the kitchen. Brooke stood and slowly pushed her chair in.

He returned with his keys in his hand. “Ready?”

They headed out. Sam walked beside her as though nothing had happened, and she wished he would yell at her or say he wanted nothing to do with her any longer. But aside from an unusually awkward quiet, nothing had changed. When they got in the car, he offered her control of the radio as usual, though she didn’t touch it.

It wasn’t that Brooke wanted to lose her friendship with Sam. But he had just confessed his love to her and she rejected him with barely a passing thought – he had every right to be angry with her.

It took about half an hour to get to the house, and neither said a word the whole way.

Finally, Sam parked the car about a block away from the house. As soon as he did, they each put on a pair of gloves. Brooke checked her watch to make sure they were on time, then she put on a dark beanie over her hair. She’d advised Sam to do something similar a hundred times over, but he always said the beanie made them look more conspicuous, so he let his blond hair show freely.

He asked if she was ready to go, and she said yes. They got out of the car and started down the street, taking care to look as though they were simply taking an evening stroll. The sun was just nearly set.

The familiarity of their routine brought her some comfort. They veered from the sidewalk into a back alleyway, and from there, they approached the backyard of the house. When they reached the door, Brooke wordlessly picked the lock. Then they were inside.

Sam found a light switch and flicked on the lights, illuminating a dining room with a long, glass table decorated with matching glass centerpieces. He gave a low whistle of appreciation, and they got to work.

Sam went to the kitchen while Brooke headed towards the front of the house. She found herself in the living room and her eyes caught on a flash of metal. There were pictures lined up on a shelf below the massive TV facing the family’s sofa. Without thinking, she went to look at the photos.

Lots of family pictures. A graduation, baby photos, a birthday party. Then, at the far left, she found a wedding photo, presumably of the parents. The wife wore a white dress with long, lacy sleeves and a collar of matching design. Her arms were wrapped around her husband. The photographer had caught them both in a fit of laughter.

Brooke picked up the photo.

“What are you looking at?”

She hadn’t even heard Sam come into the room. He arrived at her side and looked at the photo in her hand. “That won’t be worth anything,” he said, as if she didn’t already know that.

She put the photo down with a sharp noise. “This is exactly the problem,” she told him. “We could never be like that. We’re the people who rob couples like that.” As they were literally doing that moment.

She regretted the outburst. It wasn’t as if her first rejection hadn’t gotten the point across. But Sam didn’t flinch. Instead, he took the photo in his hands, stared at it for a moment, then tossed it on the ground a few feet from them. The glass frame shattered at the impact.

“Sam!” The first – unspoken – rule of robbing someone was to stay fucking quiet. And he had scolded her for almost breaking a vase the other day. “Why did you do that?”

She considered cleaning up the broken frame before recognizing there wasn’t any point since the couple would already realize they were robbed and that she was only trying to find something to do to distract from what Sam had said.

As he started walking away, Brooke reached out and took his arm. He looked back at her.

She had not thought through what to say next. She started by dropping his arm. “Maybe,” she said, because that was all she could think. “Maybe we could try to make it work.”

He blinked. “You think so?”

“Yeah,” she said before she could talk herself out of it. “We can try, at least.”

His face lit up in a grin. A smile appeared on her own face without her intending it. She was about to say more – probably something resembling an apology for the emotional rollercoaster – but she was interrupted by the sound of a doorknob rattling.

“Go, go, go,” Sam whispered as they rushed to the back door again. Brooke went out first, and Sam silently shut the door behind them, as if it made much of a difference at that point. They darted out of the backyard and into the alley.

When they were out of sight of the house, Sam let out a choked laugh and Brooke shushed him while holding back laughter herself. Finally, they reached a good distance from the house, and they both broke into giddy, relieved laughter. 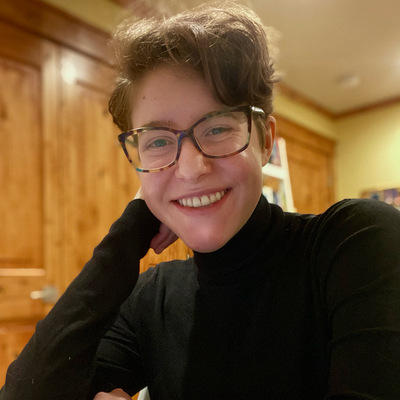 Great idea! Enjoyed so much!

Such a well written story! I enjoyed reading it! I really like you take on the prompt, a great idea! 💙🌟