Death walked into the dinner on January 2nd with a dark wind on their tail.

It was practically deserted, except for 2 women on either side of the table. The one behind the bar, the bartender, was tall and thin, with intelligent, blue, almond shaped eyes that were buried in thick purple eyeliner. She spied Death out of the corner of her eye and without looking up, she slid a glass bottle filled with a dark liquid towards Death.

The second woman’s torso was draped dramatically across the linoleum countertop, her legs dangled off the tall stool. She was sporting long bleached blond hair that was growing in a warm brown in the roots and vacant hazel eyes that were rimmed with dark circles from long nights and cheap mascara that she had previously cried off. She stared blankly at her own reflection in the plastic countertop. Every few moments she would let out a sad sigh, hiccup or sniffle but, she was out of tears.

Death took their place a few stools down from the two women and cracked the seal on their pitch black drink as the bartender set a white mug of coffee down in front of the woman.

When she sat up properly to drink it she finally spotted death at the bar.

"Hey stranger," she said, taking a sip, "New year’s eve wasn't enough to get you wasted? Most people are hungover, can you believe it?"

The silence in the bar stretched on. And maybe because Death was feeling particularly nostalgic. Maybe because even anthropomorphic beings are not immune to the awkwardness of social interaction. Maybe it was the tone the woman had. For whatever reason, they mused back,

It seemed to be the answer the woman had been looking for as she took a long swing of her drink and launched off on her own story.

"Me? Well, you see, I realized that another fucking year has passed and I'm still broke, stupid, and out of shape." She threw her head back in a bitter, humorless laugh, "I’ve  amounted to nothing. But, the thing is, that people still have hope for me, ya know?" she downed the rest of her drink but did not wait for anyone to respond, "People still pour things into me for whatever reason. money, time, love, attention, it doesn't matter. The worst part about it, is that this was supposed to be the turning point. Things were supposed to change. The thing is, people are  starting to realize that I'm a leach, a parasite, a big fucking black hole."

Death didn't make it a hobby to sympathize. However the air that night was unconventional.

Too much empathy was a dangerous thing for Death. Dangerous and rare.

They took a shallow sip of their drink and looked down the neck of the bottle at the inky liquid.

"I do understand." Death said

The woman huffed a laugh,

"No, I do, to some degree. probably on a much larger scale than you think I do."

The bartender eyed Death suspiciously, "Sometimes, I find, people, humans, are capable of remarkable change. That's part of what I find interesting about them. The folks I hang out with never change, and neither do I. I just, am, always and forever. However, some things are just made a certain way somewhere along the line. They get stuck. This comes from a combination of different people's faults and in the end no one ever wins. Do you get me?" Death studied their nails, suddenly embarrassed by their inner monologue out in the open.

"Look at you! So high and mighty! You'd be such an ass if you weren't totally right." The woman sighed and wiped her eyes, further smearing mascara across her flushed cheeks.

Outside the bar, red and blue lights flashed weakly through the bar's frosted glass windows. The bartender glanced at Death with a look that clearly said, "hurrythefuckupwedon'thaveallnightyouphilosphicalidot" to which Death reponded with a weary smile.

"So, stranger, what do I do now? I've already tried wasting away on all the pretty pleasures of this life.” She slurred, “For real, I've tried some fucked up shit. It never sticks. Nothing ever sticks" she let her head fall into her open palms.

The bartender placed a tall glass of water in front of her and guided her chin up to look up.

"Here you go sweetheart" her voice was gentle and firm and the woman wasted no time in drinking the water all in one go.

"You should come with me" said Death

The woman looked at them one final tear escaped down her cheek Suddenly focused, her eyes widened and finally, recognized her drinking buddy.

"What happened to me?" she whispered. It was more of a question to the universe but the bartender answered anyway,

"What time is it now?" the woman asked, horrified.

"Time is more of a suggestion now" Death responded.

"Am I dead?" her voice was at a panic pitch.

Death and the bartender looked at each other and then to the tear-stained woman.

"Sort of." shrugged Death. "That's why I'm here. You said you were stuck? That you felt like a black hole in people's lives? Well, contrary to popular belief, I really love happy endings and death really is a new beginning." Death stammered awkwardly, a bit like a school child confessing to a crush, "Do you want to try again?"

The woman stared at death and she accepted her fate, the events and oddities of the night finally sunk in. All the things she didn’t want to admit to herself were suddenly thrust upon the woman. With a mix of shock, horror and faint amusement, she slowly nodded.

Death turned and smiled a rueful smile at his old friend,

"Next time I'll come just to catch up, no business." they said hopefully.

"You always say that, you old fool." she told him

"But I mean it now," they countered

"You say that too, Old friend"

Death winked at her and walked out into whatever came next. 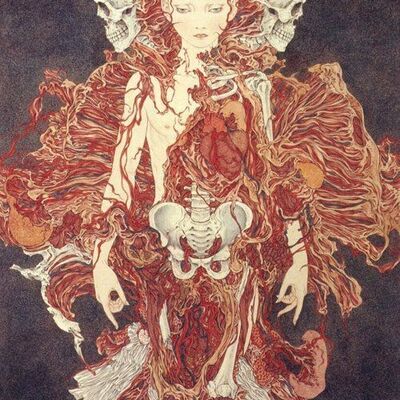