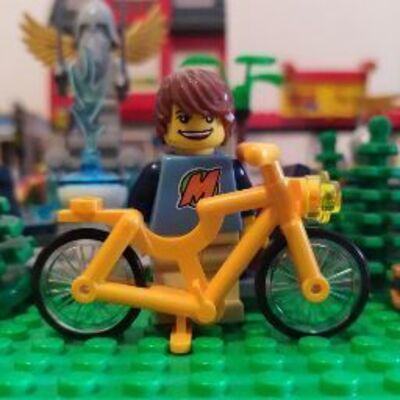 I looked at the cast iron frying pan. It seemed heavy enough for the job. It wouldn’t dent either which meant I could still use it to cook breakfast after. That is, if I remembered how to cook breakfast. Which I would, wouldn’t I?

A combination of flashing lights and people moving about the room met my unsteady gaze. Was that smoke I smelled?

“He’s conscious” a voice replied “Sir, we’re going to move you onto a stretcher and take you to the hospital. Everything is going to be okay.” Firm hands gently manoeuvred me onto a well-used stretcher and I was quickly wheeled away. The smell of the smoke dissipated as I was transferred into an ambulance. I saw rivers of water running into a drain at the side of the road, perhaps something really was on fire.

The trip to the hospital was a relatively uneventful one. Nothing out of the ordinary happened, which is just what you would expect if you were being driven in a giant mobile bedroom. The stretcher into which I had been strapped was comfortable, though the colour scheme left much to be desired. I preferred gold, and the off white of the canvas conveyed an age far beyond what you would hope. It smelled too. Of smoke. The first responder that had been assigned to monitor me sat silently across the narrow hallway on a chair that folded out from the wall. He periodically glanced at me, then to some monitoring machines, and then down at his notes. I looked at the tubes in my arm and touched them gingerly. What was wrong with me?

The hospital was as you might expect too. Scuffed though shiny floors indicated that though the building was old, it was well cared for. The lights were much too bright however, and I was forced to shield my eyes. You can always judge the quality of service by the floors.

I was put in a private room on the second floor with a window that opened no more than half an inch. After resting there for about a quarter of an hour, a team of doctors came in to question me.

“You’ve had quite the accident” the plump one began. The two doctors were strikingly different. The first was rotund, his plump figure healthy but robust. He had a neatly trimmed moustache and a jolly smile on his face. The second, was quite different. He was more slender, had small friendly yet piercing eyes, and solid rimmed glasses atop a pencil nose. I could not place the age of the second, his neatly trimmed hair and indeterminate manner of dress made it quite impossible. The plump one was evidently in his late 60s and probably close to retirement.

“Oh yes” he continued “We found you in quite the predicament, house burning, you unconscious, can you tell us what happened?”

His voice was friendly but carried an air of importance which indicated that he expected an answer, and expected it quickly. Before I could begin however then thin doctor interjected.

“The circumstances surrounding your, ahem, accident, are most unusual” he began. His voice was sharp and painfully articulate. “It is important that you tell us all you know, or even think you know.”

“He knows that dash it” replied the plump doctor “I asked him that already.” I detected a huskiness in his voice this time, and a flush came to his cheeks. If I was not mistaken, this particular doctor was partial to the whiskey when he retired to his house at night.

“What are your names?” I asked, almost surprised at the softness of my voice.

“I am Doctor Finglestein” the plump one replied, and gesturing to the other continued “and this is my colleague, and glasses wearing associate, Doctor Montgomery Fitzgerald.”

“They are quite the names.” I replied “Have you been doctors for very long?”

“I have been practicing medicine for some forty years now. I expect to retire in the next five or so” answered Doctor Finglestein.

“I do not wish to divulge my age” began Doctor Montgomery Fitzgerald “I refer back to the question, what were the circumstances regarding your accident what do you know?”

I paused. Opened my mouth to speak and then paused again. An elated smile graced my lips momentarily before I hurriedly buried it under a mask of confusion.

Doctor Montgomery Fitzgerald looked at me with his narrow piercing eyes. His gaze didn’t lift, but his eyes darted back and forth as if searching for a weakness.

“Perhaps this will stir your memory” he said.

He showed me a photograph, the sort you would expect to find atop a fireplace or on a desk. It showed a young family seated professionally, as if in a photography studio. Everyone was smiling, but the smiles looked too forced to be entirely natural. Three figures were present, a tall, smiling gentleman who held a kindly looking woman, and seated in front of them was a young child, perhaps around the age of three or four. Was I the gentleman? If I were, I was evidently very well to do. Perhaps I was the President of a major corporation, or a doctor, or a lawyer, or…it didn’t matter anyways, I didn’t want to remember.

“You should, oh yes, you should. You should know one of them very well in fact, for you are one of them.” Doctor Montgomery Fitzgerald spoke with an edge to his voice. He wanted information, and he wanted it now. I could tell that plainly.

“Am I the child? Is this an old family photo?”

“You are incorrect on both counts I am afraid” he began slowly “I believe that you are lying to me” he leaned in closer “I am an expert at detecting liars Mr Johnathan Winstanley. Do not lie to me”

“I say” interrupted Doctor Finglestein “It’s pretty rash to accuse him of lying. The poor man has had an accident. It’s very likely he won’t remember everything for a while.”

“That is exactly what he is hoping for. To not remember.”

“I’m sorry” I began “I’m not sure I know what you’re talking about.” I was trying desperately to maintain my cool. Hearing my name had almost given me a start, and maybe even given me away. It is strange how the hearing of one’s own name stirs something within you. Johnathan Winstanley was indeed my name, though I could not remember anything else about it.

I stared up at the light on the ceiling. It was a curious light, not quite round, not quite square. I found a dead bug and stared at it. He was free from their awful questioning. Death would perhaps be a welcome escape in this situation. Remembering my name was one thing too many to remember.

“How can we be sure that is my name?”

“Mr Winstanley. There is no dispute among us about your name.” he stood and stared.

The more he stared the more I began to notice about him. His thin pointed nose was slightly crooked, as if it had been broken. One of his eyes could dart about free of the other and seemed to look deeper into my soul than the other. The wrinkles in his skin betrayed his age, or, at the very least, indicated stress levels beyond that which an ordinary human should be exposed to on a regular basis. He leaned in closer.

“Mr Winstanley” his voice took on a dangerous tone. “You will remember who you are and what you were doing. If you will not, we will help you to remember.”

“Mr Winstanley. The circumstances surrounding your, ahem, accident, are most unusual not least of all because of your current employment. You know things that we need to know, you have knowledge that we need, knowledge that we cannot live without” he began to pace the room. His hands interlocking nervously. “You have the secret we need, you hold the key so to speak, you” he paused and turned “are the key. And, as you clearly do not wish to remember I’m afraid we have no choice but to label you as mentally unstable. Doctor Finglestein, I recommend that we commit this poor troubled soul to memory therapy as of this very day.” he glared as if to emphasize his point. “Wouldn’t you agree?”

Though he looked troubled, and sympathetic, his actions told a different story. “I suppose you’re right” he mumbled.

The last thing I remember is he pressed a button.

Then my world went black.