Sun shown through the foggy hospital window, gently lighting Zach’s face. The beeping of the heart monitor was now background noise to Aaron. He had been pacing these hallways for days now waiting for him to open his eyes. He had been given a decision to make. The surgery could save Zach’s life, but it was also life threatening. It was too much for one person to decide.

Though Zach was in a coma Aaron had hope that he would just wake up and they would laugh about the whole affair. He missed that deep hearty chuckle that was so distinctive, the light that seemed to sparkle in Zach’s hazel eyes when he glanced at you. He missed the way Zach’s smile could light up the room and make you forget all the problems the world through at you. Zach had always been the strong one, it should have been him lying in this hospital bed. Then he wouldn’t be burdened to make this decision on his own. He was always so indecisive, and this was one of the biggest decisions of both their lives. “What would Zach do” he kept asking himself, but he knew Zach would have been brave and gone ahead with the surgery. Why couldn’t he find the strength.

He kept replaying the whole event, a constant loop of anxiety swelling up inside himself. They were at a friend’s birthday party and had both had a few too many drinks. They should have taken an Uber home, like they always do. Zach said he was fine though, and Aaron was way too tipsy to think otherwise. He remembered seeing the bright lights from the semi coming towards them, the two of them laughing as the rain poured down around them. Zach had entered the wrong lane and swerved out the way into a ditch. The car tumbling like they were bouncing around in a laundry machine. He couldn’t remember if he screamed. He just remembered the implosion of glass and earth, and how his last thoughts were just to be able to hold Zach one last time.

Here he was barely bruised, a few scraps like nothing had happened. Zach on the other had gotten a concussion and broken some ribs and may not even wake up. He needed a Xanax. He fumbled with the bottle in his bag of medication when a doctor walked in. Surprised by the intrusion the pill bottle popped open and spilled the little blue tabs all over the floor. He quickly went to pick them up, if the was preoccupied he could ignore the medical staff’s request just a little longer

“Aaron, I know this is tough I wouldn’t wish this situation on anyone. We’ve given you some time, but we really need you to make this decision. The longer you wait the lower the rate of success becomes. I know you’re hoping for Zach to wake up.” He saw the sadness in the Doctors eyes as she spoke, but he didn’t want her pity. Why couldn’t the hospital just do it and not ask him. “I know you need an answer” He replied, “What if I say to go ahead and he dies, I can’t live with” but he broke into tears and couldn’t quite get the words out of his mouth. “Look, I can give you some more time, but we really need to get an operating room booked if we can. Use the call button if you make a decision; otherwise I’ll be back in a few hours”.

He should have taken a walk to clear his head, maybe Zach was just playing a trick on him and was waiting on him to leave before shouting surprise. Zach had always been a prankster. He held Zach’s now limp hand in his “This isn’t funny Zach, you got me. It’s time to get up.” There was no response, not even a change in breathing. He moved the dark hair that had fallen out of Zach’s eyes. He had this aura about him when he would first get up in the morning. His wild and curly dark hair was all over the place, wiping the sleep from his eyes. It’s what he looked like right now. His untamed mane tousled upon the white pillow beneath him. He looked almost peaceful laying there.

He had been here for over 24 hours and had slept maybe an hour or so, he needed some coffee. “I’ll do it, I’ll leave for just a second Zach I’ll be right back so if you’re going to surprise me, now’s the time. I’m going to get us both a coffee.” He began his slow pace out of the room, slowly dragging his feet the lack of sleep had turned him into a zombie. He was barely out the door when he heard Zach’s voice. “Aaron” Zach coughed, “Aaron” he kept muttering. Aaron rushed to Zach’s side grasping his eyes a torrential down pour of tears. “Zach, I’m here, I’m here baby. I love you, I’m sorry”. Zach had opened his eyes and barely muttered “love you” followed by an attempt at a wink. Zach was always winking.

Aaron hit the call button to have a doctor come check on Zach. He pulled him close and hugged. “I couldn’t decide Zach, I couldn’t make the call for the surgery do you want surgery it could be life threatening” He blurted out, but as he did so Zach started convulsing his heart was now off the charts. “NO” Aaron screamed, “Zach come back to me come back to me Zach”. Nurses rushed into the room his doctor soon followed “we have to go now take him to operating room 3, Aaron you have to give us the go ahead”. “Do it, just do it Aaron screamed I’ll sign the paperwork”. He couldn’t handle this stress, but at least it had forced him to make a decision. Now it was all just a waiting game.

He sat in that waiting room, looking at all the families, some reunited other’s sobbing. There were people pacing the floors, and nurses running all over the place people coughing. The cacophony of sounds were blurring into the background noise.  Aaron could only focus on the coffee cup in his hands. He didn’t need it now he was wide awake. When were they going to tell him about the surgery, when was he going to find out what had happened?

Then he saw her, The doctor was slowly walking towards him her mask hanging from one ear. His heart was now pounding out of his chest, why was she walking so slow. The angel of death would surely be wearing black, but here she was in blue, please have good news. “Aaron, I’m so sorry” The words Sorry rang through his head “No no no no no no no” he stood up, and then fell to his knees. His sobbing so heavy he began to heave, his ability to breathe labored and wracked by the weight of what was happening. “I did this, I couldn’t decide, I… I…” he stammered not able to comprehend that this was real life and not some waking nightmare.

When he finally returned to their home he lay there in a ball in their bed. Zach’s pillow still smelled like him. He held it close to him sobbing into it. He would wake up and this would be all over. He missed hearing Zach’s voice. He had to distract himself, so he pulled out his phone. He noticed he had some unseen snapchats, maybe this could help distract him. Then he saw it there were some unwatched ones from Zach. Though he knew he shouldn’t he instinctively click on the it. There was Zach with teddy bear ears and a funny voice. “ I love you” Zach crooned out laughing “I’m going to tackle you as soon as you get home from work you will barely be able to stand” He saw the joy in Zach’s eyes  and his poor attempt at humor with his bear pun and it stung.

There it was his bottle of Xanax. If he couldn’t trade places maybe he could join him. He downed Xanax after Xanax hoping to quite his mind and hoping he too would be with Zach soon. He lay there finally feeling calm as he hugged Zach’s pillow closer and slowly drifted off to sleep. 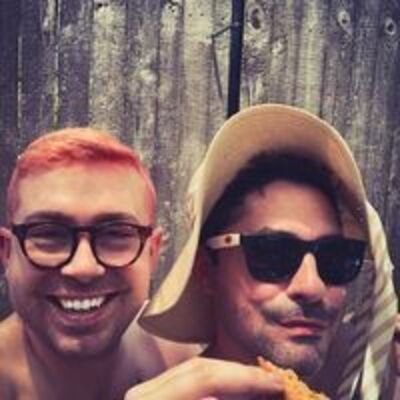 This-it's just so-Aaaaaah! I absolutely. LOVED. it. But the ending though...noooo why!!!!! It was a sad, yet amazing, story. Great job, can't wait for more!

I know I need to write something happier ha ha! I’m glad you enjoyed it

Thank you! I’m new here, but needed a creative outlet and thought this would be a fun place! I’m glad you enjoyed it :)