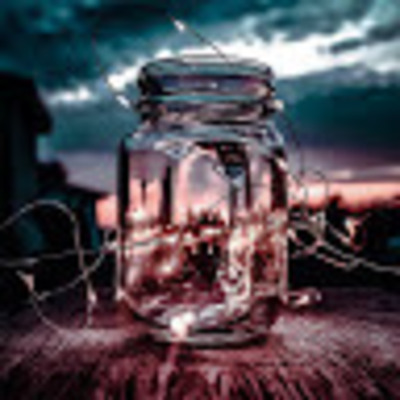 The cold chill of the crisp autumn air brushed against her freezing face. Her dirty-blonde hair whipped around her head freely, as she carelessly attempted to get it away from her mouth with her thin, purple gloves. The beautifully colored autumn leaves whipped around with the rhythm of her hair, some detaching from their branches.

The sky was a bright baby blue, with few clouds to be discovered. It was just a typical autumn day, with squirrels running around gathering acorns, people out and about conversating, and flowers desperately waiting to be picked before they are buried by mounts of snow.

A small leaf was snatched by the fast-moving wind, floating with the breeze and peacefully landing at the girl's feet. She slowly scrunched onto her knees, hovering above the leaf, smiling to herself. Her soft purple scarf scrapped the ground as she grabbed the leaf and lifted herself from the ground.

She hadn't seen a leaf-like it before. It was burgundy-colored, with black veins running throughout. The edges were a darker red color, with splashes of white plastered on the uniquely created leaf.

She carefully placed the leaf in her white coat pocket and returned to waiting patiently, anxious for the journey awaiting. Her facial expressions were calmed and relaxed, although inside she felt excited. More excited than usual.

But her expression changed when she observed who she was waiting for. In the near-empty lot ahead of her, a small, black Toyota Camry pulled in hurriedly, searching for a spot to rest. She averted her gaze, as she watched the vehicle park, and the brake lights swiftly shut off. The door opened quickly, as the man jumped out of his car.

The boy practically ran across the parking lot to see her, beaming the whole way there. As soon as he reached her, they hugged, as he lifted her high up into the air, while she squealed like a child. She planted a quick kiss on his cheek as he set her down carefully.

"I'm so sorry I'm late, Alice," he began. "The traffic was crazy today, and I-" he quickly began. She held his hands in hers, and searched his beautiful, deep blue eyes while saying, "It's alright, Ben."

Alice always loved it when he would endeavor to explain himself for doing absolutely nothing wrong. He would start speaking quickly and blush constantly. She thought it was cute.

"Come on silly, the apple trees are this way," she stated, grabbing his fist and tugging him along the path.

They paced contently through the thin layer of woods, admiring their surroundings and being at peace with the wonder around them. The wind continued casting a breeze over the trees and leaves that were on the ground. The only sounds to be heard were birds zipping through the cold air and leaves shifting positions on the forest floor.

After a few moments of walking through the muddy path, Alice and Ben arrived at a large field, with a large array of apple trees. Alice suddenly stopped, and let go of Ben's hand. She inhaled slowly, closing her eyes for a brief moment.

She then exhaled, turning and glancing at Ben, the most handsome and caring man she had ever met. His messy chestnut hair was whirling in the wind along with hers, as she gently removed a piece from hanging in front of his eye. She let her hand linger a moment, before removing it from his face.

"I remember when we had our first date at this very orchard," she looked at the ground.

"It was one of the best days of my life," she continued.

She smiled at the ground and grasped Ben's hand again. It was almost considered a sense of comfort to her. His hand was always warm, and somehow inviting.

They scrambled to the rows of sorted trees and made their way through a field of Macintosh apple trees. They hadn't really come to the orchard to pick apples as they were to just enjoy each other's company. Or so they thought.

They stopped here and there, admiring large apples, taking juicy bites of the few they selected.

As Alice kept walking down the pathway guarded by small trees, she realized Ben hadn't been following. Turning and looking every which way, Alice saw him nowhere. She felt a chill ride up her spine and shivered.

Peering through trees and apples, she found herself practically sprinting down the pathway to find her significant other.

To the left of her, she heard a leaf crumble, and apple fall, feeling a quick jump in her heart. She made her way to the sound to find the apple on the ground. Bending down to pick it up, she was quickly was lifted off her feet from behind.

She started laughing, recognizing Ben's laugh from behind her and squirmed to get out of his tight grasp. He released her and rested his hands in his jeans pocket, a smug look on his defined face.

"You totally fell for that," he smirked.

Ben chuckled to himself as Alice rolled her eyes. He always had to find a way to amuse himself by toying with her, and she loved and hated it all the same.

As Ben continued to chortle at himself, out of the corner of her deep green eye, Alice saw an apple. But not any ordinary apple, an apple that was so perfectly colored and clean looking, it shimmered in the little bit of sun that was exposed through the thick array of trees. She quietly made her way over to it, easily picking it off its branch. She then turned to Ben, who was now behind her, and glared at him, as he made his way to her.

"This apple, it looks so…" she hesitated. "I'm not sure how to explain it."

There was a short hesitation, as Ben stood there, eyes shining brightly. He looked at her, and smiled, showing his white, pearly teeth.

She looked at the apple in confusion, hitting it with the palm of her hand like she was waiting for it to crack open. What in the world was he talking about?

"Here." Ben kindly snatched the exemplary apple from her petite hand, twisting the stem slightly, and the apple opening. It split in half, the top peeling away from the bottom. The inside was like the interior of an apple, the color that's a mixture of white and yellow. But there was a hole in the apple, containing a small accessory.

In the heart of the Mackintosh apple, lay the most gorgeous emerald ring Alice had ever laid eyes upon. It was silver, with a tiny green gemstone attached. It was in a square shape, with silver swirls complimenting and resting upon the emerald. The reflection of the now setting sun was shining upon the ring, as Alice felt a tear form in her right eye.

She whipped it away quickly and peered to Ben, who now was kneeling on the ground, looking up at her.

"I found the exact one you were eyeing at Pandora's Jewelry. It really does compliment your eyes."

She cuffed her mouth with her hands and felt the tears of happiness eagerly rush down her soft, tan face. The wind began picking up again, swaying both of their hair to the side, and moving Alices scarf along with it.

"Alice Marry Dubrez, I want to be with you for the rest of my life, and many years after. You bring so much joy and happiness to my life, so much more than you might think."

Ben stopped for a moment, as if he was recollecting his thoughts, and deeply inhaled and exhaled. This is the moment he had been preparing for only shortly after he met her.

"With that being said… Alice will you marry-"

"YES!" Alice interrupted before he could finish. She ran into his arms as he immediately stood from his knees. She kissed him passionately, as he did her. The wind shifted the leaves on the ground around them, almost like they were circling around the two, and residing back where they belonged on the ground. The cold broke their kiss, and even though they were no longer in physical contact, they didn't break eye contact. Alice's filled with tears, and Ben's filled with joy and pride. They both knew that they wanted to spend each and every second of every day with each other, and always be at each other's side.

"Let's get out of here, huh?" Ben suggested.

Alice wrapped her arm under Ben's, instantaneously feeling the warmth of his muscular body, as they began to walk out the way they came in. She dug her head into his arm, and never even bothered to wipe the now stained tears from her eyes.

"On a more real note, where in the fuck did you find a fake apple that opens up to be a ring holder?" She questioned Ben sarcastically.

"If I told you, there would be no secret," Ben smugly responded.

Ben and Alice drifted off into the woods together, there muddy boots leaving a trail in the mud, as the wind continued soaring through the trees and field.

Alice was so happily blind-sighted from her dream proposal, that she didn’t even realize the burgundy leaf from earlier had fallen out of her jacket pocket. It lay there soothingly, waiting for the next person to find and admire its beauty.

I guess it wasn’t just a typical autumn day.

Hooray for the couple! This was a very nice story, and I liked the characters. You have a really good way of descriptions especially when the ring was revealed. Hope to see more.

I really appreciate the compliment, thank you!