For forty-seven days, Staci Richards was held captive at the hands of a madman.

Pulled from her bed in the dead of night, her mouth was stuffed with dirty rags so she couldn’t cry for help. Her hands and feet were tied, leaving her to lay helpless on the floor as her assailant crept into the next room, putting a bullet in each of her parents’ heads. He carried her out the door as tears streamed down her face, tossing her into a van as though she weighed no more than a sack of flour.

He drove for what seemed like ages. There were no seats in the back of the van, and even if they were, she was bound so tightly that she wouldn’t be able to sit up if she tried. With every turn, she slid across the cold metal floor, bumping against spare tires and loose tools. The van finally stopped, the brakes emitting a high-pitched squeal. Staci’s heart pounded as the man shut off the engine and opened his door. She squeezed her eyes shut tight, waiting for him to open the back door and drag her out onto the ground.

As the seconds slowed to a crawl, she realized that his footsteps were heading away from the van. A door slammed outside, the sound muffled by the metal walls of the van. And so she lay in almost complete darkness, her bones aching from being tied up so tightly. Sleep was impossible, and so was escape.

As the sun began to rise and cast a golden glow through the cracked windshield, the back door was jerked open. Staci strained her neck, catching only a glimpse of the man who towered over her, his bulky frame blocking the entire opening. This was not the same man from last night, she realized with a pang of hope. He must be a policeman, come to rescue me, she thought to herself. She let herself relax as he reached into the van, only to be knocked unconscious by the blow he dealt to her right temple with the bottle of beer he had just emptied.

She awoke in a concrete room, dimly lit by a single flickering bulb. There were no windows, only cinderblock walls and wooden rafters. Pipes and wires ran along the ceiling, reaching into the structure above. An old and rusty water heater took up one corner, opposite a rickety set of stairs which led to a plywood door.

She lay on an old cot, the kind that was used in Vietnam or Korea. No longer bound at the hands and feet, she carefully lifted herself into a sitting position. Dizziness overwhelmed her, blood rushing to the side of her head. Her wrists were swollen and bruised, as were her ankles.

The door across the room slammed open suddenly, bouncing back against the wall. Staci jumped, pushing herself into the corner. The man from that morning forced his way into the room, through a doorway that was almost too narrow for his body.

He approached the cot slowly, a sick grin spreading across his face to reveal rotten teeth and a blackened tongue. His face was covered in sores, some of which leaked pus down his cheeks. His hair was grey and unkempt, matted into dreadlocks against his scalp. He wore a torn T-shirt, stained with what could only be blood. He grabbed Staci’s chin, roughly twisting her gaze to meet his own crazed eyes.

For nearly two months, Staci was kept prisoner in this single room. She slept on the worn cot, no blankets or pillows for the cold nights. A bucket in the corner was her bathroom, which the man never bothered to empty. Once a day – as best as she could guess, since there were no windows and no clocks – he would give her a meal, tossing the food through the doorway before slamming it shut once more. The food was usually rotten, but she fell upon it like a wolf upon a newly killed deer.

She spent many days alone. She grew to enjoy being alone, because being alone was better than being raped. Every few days, the man would make his way into the basement. He had his way with her, ripping her clothes from her body and forcing her against a wall. He beat her if she fought back, striking her in the face with his massive fists. Then he would leave, slamming the door behind him as Staci lay quivering and bleeding on the cold and hard floor.

Of course, she had tried many times to escape. And many times, she was caught. The punishment was severe, leaving her with bloody lashes across her back. The wounds burned like fire when she lay down, and stained the army-green cot an odd shade of reddish brown. She quickly gave up, resigning herself to her fate.

For forty-seven days, Staci was nothing more than a prisoner and a toy.

On the forty-eighth day of her imprisonment, the door slammed open with such force that the already warped plywood began to break from the hinges. Staci lay on her cot, curled up to hide her face against the wall as the heavy footsteps made their way down the wooden stairs. First one set, then another, then a third. A shudder racked her frail and broken body as her mind raced to imagine what horrors could possibly be brought upon her.

A sweeping beam of light fell over her, casting a dark shadow against the grey wall. She hid her face against the light; it was far brighter than anything she had known in so long. She listened as the footsteps surrounded her, waiting to prey upon her battered form.

Another set of footsteps came down the stairs, this one much softer than before. The sound grew closer and closer, up to the edge of the cot where Staci’s head lay. She shivered in fear, silent tears running down her face.

The voice belonged to a man, filled with kindness and compassion.

Slowly, she rolled herself away from the wall to face Everett, wincing with every movement she made.

“Careful now,” Everett said, extending a blue-gloved hand to support her head. “Would you mind turning off that light?”

The woman behind him switched off her flashlight, tucking it back into the pocket of her bulletproof vest. Staci could see clearer now, and her eyes flickered across the room. Three police officers guarded the basement, weapons at the ready. Everett wore a different uniform. She squinted, making out a star with two twisted snakes in the center.

“I’m a paramedic,” he said, knowing what she was about to ask.

She snapped her head to the door, as two more paramedics entered and carefully maneuvered a gurney down the stairway. The police officers stepped back, taking places in each corner to make room. They wheeled the gurney alongside her cot, carefully rolling her onto her back to support her neck as they lifted her.

She writhed in pain as her skin touched the fresh cloth, but quickly relaxed in the luxurious comfort of the cushioned gurney. Strapping her into place, they half-carried the gurney back up the stairs and through the house above.

Everett walked alongside her, and she reached weakly for his hand as they crossed into the outside. He took it carefully, cupping his much larger hands around hers. The sun was shining brightly, blinding her sensitive eyes but warming her skin with a gentle touch. With fresh air in her lungs and the scent of wildflowers washing over her, Staci drifted into unconsciousness once more, this time with a feeling of joy. 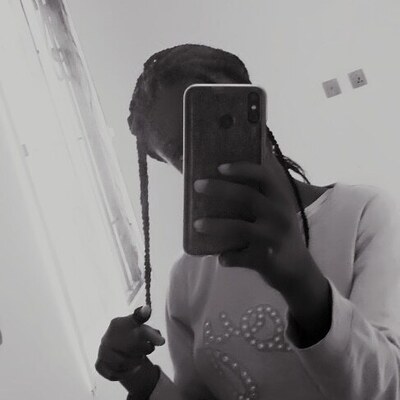 It's beautiful and so vivid. I loved the the beginning sooo much. It was so captivating. Keep up the good work!💛