"naomi," or 1 million butterflies pinned to a wall

I don’t know much. That’s what college was supposed to fix. I read big books with big words, Susan Sontag, Karl Marx, Arendt, Foucalt, Nietzche, Sartre. Each flip of the page was a hand on my shoulder, twisting me in a new direction. I graduated dizzy and confused, uncertain what anything was, whether anything was real. Ask me what I read for my senior thesis and watch my eyes dim and fog. They only taught me to question the world, and they provided no answers.

I don’t know how to write a will either. I thought that would come later. But throw a baby in a pool and it will learn to swim; give a twenty-something a diagnosis and she will draft a will.

I didn’t know where to start, so I’ll begin by listing all that I do know.

I stop writing. The certain facts have been exhausted. From here on, things become subjective.

I’m stressed on their behalf already. They won’t know how deeply to grieve. We’re college buddies, people you reminisce with about blowing smoke from a dorm window. My death will make our relationship prematurely serious.

Naomi too. At least she now gets to say “my dead ex.” Those words will sound so mysterious tumbling from her purple lips.

That’s one more thing to add to the certainties list:

Things are distributed in wills, I know that much. Belongings must be tallied, inheritances decided. I own:

Everything else can be thrown away. The makeup too -- it’s a sad artifact, dusty eyeshadows, cracked lipsticks, tubes of dried mascara. After my education made me stupider, I decided I would become hot. I never considered it an option before, and I had no formal training, no one to teach me. I wanted to be an effortless and beautiful woman, someone who would fluttered through life like a butterfly, no thoughts, no purpose but to delight babies and couples observant enough. But I don’t know makeup.

Naomi offered to do it for me. It felt humiliating. I should have been already beautiful for her.

In the gap between our break-up and my diagnosis, I learned. I stepped into the spring sunshine with my sunglasses coquettishly poised on the tip of my nose, the frames dipped low to broadcast my eyeliner, the gold dusting my eyelids. I walked with my back erect, fresh coffee in a paper cup, car keys swinging from my hand, a fishtail-swish in my hips. I was young, I was beautiful, I finally knew it, knew how to use it, live it, be it. I no longer hunched over books, no longer a rigid intellectual but a wild, breathing, breeding animal.

It seems unfair. I just figured out how to weave the fabric of it all to my liking, but the loom had been snatched, broken, burned.

And those unfinished manuscripts, what to do with them? My friends had been polite, said there was potential. It was too late to finish, to revise, to carve anything of quality from those chunks of words. I tell myself I didn’t live long enough to write anything profound anyways.

I told Naomi it was like catching butterflies. They look nice pinned under glass, but it’s not the same. But if you don’t pin them under glass, they die alone in the fields, decompose into nothing.

Naomi didn’t get it. What are the butterflies?

Life. And the act of pinning is me writing.

Naomi didn’t like metaphors. She had no need for them. She was a million butterflies herself. I tried to catch them, like a desperate contestant on reality TV snatching flying dollar bills in a windy booth.

Maybe that’s where I went wrong. Butterflies should fly free, make quick circles with other butterflies. Maybe. I don’t know. I only got to fall in love once.

I was the one to break up. She didn’t love me enough. It felt like no one did. With her, it hurt especially. She was so big, so bright, so beautiful, exploding every which way all the time, every which direction but mine. I wanted to hold her in the palm of my hand. But it was only right to let her flutter on through the reeds, the sun-dappled trees, bright and glistening in the spring sun.

I wish I wrote about her more. It was an honor to be here, alive at the same time as her. As all of them, my friends, my parents, my professors, classmates, the people who smiled at me on the street. I wish there was a record of it all, all the little interactions, the tiny connections like pinpricks of light in a vast, dark universe. I know it’s not mutual, but I will miss them all dearly.

But while I’m still here, there’s business to attend to. I decide to divide everything like this:

I don’t even have snively grandchildren to cause a fuss dividing the money. But who would fight over $1,111 anyways? Maybe I’ll make a one-time donation somewhere important, just so someone reads my name and smiles in gratitude.

Writing a will isn’t hard, really. I know that much.

This is really lovely. I particularly liked, "I graduated dizzy and confused, uncertain what anything was, whether anything was real. Ask me what I read for my senior thesis and watch my eyes dim and fog. They only taught me to question the world, and they provided no answers," "I don’t know how to write a will either. I thought that would come later. But throw a baby in a pool and it will learn to swim; give a twenty-something a diagnosis and she will draft a will" and "Naomi offered to do it for me. It felt humiliating. I should have been ...

thanks so much, and of course :)

Wow! I see now. I see why Zilla is a fan of your writings (now, I am too). This is beautiful, Masha. Absolutely perfect!

thank you so much <3

Yet again, you managed to excel at a prompt in a wonderfully unique way. There are so many excellent quotes in here - I'd list them but it'd be too long. My top three are: (1)"I graduated dizzy and confused, uncertain what anything was, whether anything was real. Ask me what I read for my senior thesis and watch my eyes dim and fog. They only taught me to question the world, and they provided no answers," (2) "But throw a baby in a pool and it will learn to swim; give a twenty-something a diagnosis and she will draft a will," and (3) "But it...

Hey Masha, I just wanted to say that this is amazing. You are a very talented writer. I love the descriptions, the pacing, and you analogies, especially with the loom and the butterflies. Absolutely brilliant!

Hey Masha! I don't have anything particularly useful to say, but I've read some of your stories in the past and I think this one is fabulous! The imagery is really amazing and the descriptions were so beautiful. I'm so glad I read this. You're such a talented writer. Hope you're staying safe and that you keep writing! (p.s. if you get the chance, I'd love if you could check out my recent story. I'd love to see what you have to say)

I am so amazed and filled with inspiration every time I read your stories-not only left with a new zeal for life, but also for my writing to emulate yours. You are immeasurably talented. This story flowed so well, and what's even better is how effectively you were able to portray so much in such a short story. There was a perfect blend of emotion and humour which made it so effortless to read. I love your descriptions so much, they're always so vivid and create a movie scene right in front of my eyes. The description that really caught...

wooww this may be the kindest thing anyone's ever said to me <3 thank you so much!

Hi Masha! Once again, you have accomplished beautiful, witty storytelling with your writing. Your character is spontaneous and it makes this even more of an entertaining read! I am such a fan of your stories and was wondering if you could possibly give me some feedback on my story, "Splintered Like Firewood"? If not, that is totally fine! I look forward to reading more of your stories :)

thank you sm and of course! :)

God I love your writing. Just so gorgeous and clever. I wanna point out a favorite quote but I’d just end up pointing out the whole story. My favorite thing is that the narrator just wings it (pun possibly intended) which makes for a much more entertaining read because every line oozes with personality. Definitely my favorite take on the prompt so far! 😙

wow thank you so much!!

I absolutely loved this story, the structure you used was so fun. And of course, the language was gorgeous. I really like how you portrayed the narrator and Naomi's relationship and I just kept wanting to know more. I absolute love the title and I love how the narrator's personality really shines through. I really liked this part. "That’s one more thing to add to the certainties list: I loved kissing Naomi’s purple lips." Maybe it's because I'm super attracted to girls who wear dark lipstick. But as always, absolutely amazing work!

thank you so much :)

I like the whimsical element, and the comments on learning vs beauty culture.

"But throw a baby in a pool and it will learn to swim; give a twenty-something a diagnosis and she will draft a will." What a fantastic sentence! This was a beautiful story. Thank you for sharing.

thank you so much!!

Aw, this was beautiful! I really enjoyed it! 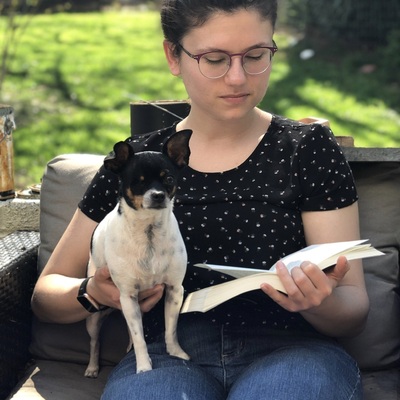 I loved this so much that I've already read it twice, and I'm sorry I don't have anything especially useful to say except that I like how you never revealed the actual diagnosis, and this was my favorite line: "But it was only right to let her flutter on through the reeds, the sun-dappled trees, bright and glistening in the spring sun."

Yay! Another story! I really liked this one!