Barbara and Edward Mann climbed the last few feet of the steep walking trail. They paused and breathed in the sweet, intoxicating aroma of creosote bushes. The horizon swallowed the sun and painted the sky with brilliant colors of red and orange. Saguaro cactuses raised their spiny arms toward the vivid sky.

“That afternoon thunderstorm passed through quick,” Barbara said, throwing off her backpack.

“Yeah, I’m glad it didn’t last long,” Edward said, “the sky should be clear for the meteor shower.”

“I’m almost sorry our vacation is about to end,” Barbara said with a sigh.

“I have to agree, this was one of our best,” Edward replied, unpacking the tent.

Nocturnal animals were waking. A small gecko, in search of insects, scurried across the clearing. The katydids and crickets filled the desert with their night songs.

“Maybe we should wait a bit before taking another lengthy trip,” Barbara said, spreading a sleeping bag out on the ground.

“I’m too old for all this gallivanting around,” he said, chuckling, “a year is a long time to be away from home.”

“What time does the Perseid meteor shower start?” he asked.

“It started around eight, but it ramps up around two o’clock in the morning.”

“Let’s get a fire started, it’s getting a little chilly.”

“You get the fire going and I’ll make the coffee,” Barbara said, “we don’t want to fall asleep and miss anything.”

Millions of stars blanketed the blue-black sky. A pack of coyotes howled from a faraway place. The desert night gave strange tranquility that nowhere else offered. The couple had traveled the world the past year. They experienced the culture of many countries, saw unusual customs, and celebrated foreign holidays. The serene isolation of the wilderness was a fitting end to their action-packed vacation.

“Do you remember the first time we celebrated our anniversary away from home?” she said, handing Edward a steaming mug of coffee. She sat down and snuggled up to his shoulder.

“Seems like a hundred years ago,” he said, kissing the top of her head, “and here’s hoping for another hundred.”

“You’re such a softie,” she said, giving an elbow nudge into Edward’s side.

Edward pulled the blanket around Barbara’s shoulders and hugged her closer. In all the universe, there was no one he would rather spend his life.

“Ed, look, there’s one,” Barbara sat up, pointing towards the northeast, “and another.”

“You sound like a kid, you’ve seen a meteor before,” he said, “I love that about you.”

“We don’t have to wait much longer,” she said, “I want to enjoy the view, I’ll nap on the way home.”

The two sat quietly and watched the celestial fireworks show unfold above them. Streaks of light blazed across the black velvet sky. Barbara hid a yawn. She struggled to stay awake, but sleep finally won. Edward smiled affectionately at his wife’s soft snoring and continued his vigil.

“You let me fall asleep,” she said, “I told you I didn’t want to miss anything.”

“It’s almost time to get started,” he told her, “and nothing happened. You didn’t miss a thing.”

“We better get this stuff packed up,” she said, grabbing the blanket.

“The meteors are shooting by more often,” said Edward.

“Don’t forget to put out the campfire,” she said, “wouldn’t want to get into trouble on our last day here.”

Barbara and Edward packed up their camp and trekked off towards a nearby clearing. They placed several small beacon lights around the perimeter of the area.

“This is a magnificent place to visit,” Edward said, turning on the last light.

“It sure has been an eventful year,” Barbara said, “things have changed so much since our last trip here.”

“A lot of potential for this little rock,” he said, “humans can do exceptional things when they act together.”

“I think we should give it a few decades and come back,” she said, “there should be marvelous changes.”

“I believe that’s our ride,” he said, “it’ll take a few minutes to get here. I’m ready to get changed and take a nap.”

“Oh, Ed, you can change now,” Barbara said, giving him a wink, “no one is watching.”

“Sounds good to me,” he said, pulling off his jacket.

Edward threw his clothes off and sloughed off the synthetic human skin.

“Ah, that’s better,” he said, stretching out his tentacles, “I feel like a new being.”

“This feels better,” she said, “but I enjoyed being human for the brief time that we were here. Next time they may accept us in our natural form.”

“I wouldn’t count on it,” he said, “humans are a complex species to understand.”

"True, they can be complicated," she said, "but I find them worth a future visit."

“Goodbye Edward and Barbara Mann,” he said, waving a long tentacle at the piles of skin, “see you in another fifty years.”

“That’s the shuttle,” she said, gesturing towards a glowing orb.

Under the guise of the Perseid meteor shower, the craft landed undetected. It touched down in the soft sand and threw up a cloud of dust. A door opened, emitting a soft white light. The couple gathered their human belongings and strolled up the entrance ramp. They turned and took one more look at the splendid vista.

“Goodbye Earth, stay safe until we see you again,” she said, with an otherworldly smile.

The small spacecraft shot off into the pre-dawn sky. An insignificant dot of light, it blended with the meteors that streaked through the atmosphere.

Just a normal, drama story to turn into one of fantasy. Fantastic read. Loved it.

Ah, thanks! I just thought it would be fun. 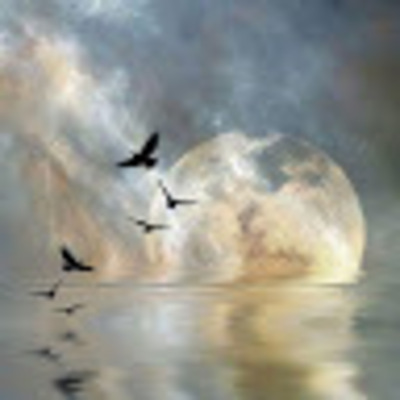 Brava! Oh my goodness, what a twist! I love writing short stories with a surprise hidden away for the reader. This one is magnificent. I am so glad that I read it!

Thank you. One of my favorite things is to do a twist. I'm glad you liked it.

Woah, what an ending! Was not expecting that at all. Full marks for a great twist

Emilie, thank you! Appreciate you for reading the story. It was just fun to write.

It seemed a normal little story right to the point that you twisted it sideways. The sort of sweet, slice-of-life I often see. Then you end like one of the great masters- Isaac Asimov. Really enjoyed this. Wish I could like it more than once.

Thank you for such an awesome comment. Glad you liked it. I'll take a compliment like Isacc Asimov any day! I thoroughly enjoyed reading your stories. Your chase story was great—I'm a fan of westerns.