Waiting for the 201, Notoriously Unreliable

“Is that yours?” Her eyes are wide, so big they might look like they were bugging out of her head if they weren’t so beautiful.

I guess, technically speaking, she could be referring to the sketchbook. Is that sketchbook yours? Or the charcoals. Or even my shoes, for that matter, almost the same shade of dingy gray as the sidewalk beneath. But I know she’s referring to the drawing, which of course no one is ever supposed to see ever, and yet she’s looking at it like it’s nothing. Well, she’s looking at it like it’s something, which is almost worse.

“…Yeah.” As if I’d have someone else’s drawing. I close the sketchbook, simultaneously frantic and mechanical, like a machine that’s malfunctioning. Error. Error.

“Oh. Okay.” A passing dog cocks his head at me, as if saying well? and I remember: “Thanks.”

There’s an awkward pause, and I scramble trying to find some way to fill it. A few contenders emerge:

Do you come here often? Which is dumb because I see her here practically every day, waiting for the 201 bus, which has been on-schedule a total of twelve times in the last 2 years.

Where are you headed? That would make me sound even creepier than I probably already look, with my stringy hair and no makeup and loose clothes, like a few steps and a broom-closet-of-a-room away from homeless.

I think you’re beautiful. Definitely not that one. She wouldn’t need me to tell her that, anyway. She already knows; look at her, the way she smiles at the old man crossing the street, the way she brushes her hair behind her ear so that it perfectly frames her face, the way she crosses her ankles when she sits down because she’s polite or modest or nervous that the city will eat her up if she’s not careful.

I’d guess there’s a 90% chance that she’s 100% straight. It emanates from her like gamma radiation. Maybe her straightness will be so potent, it’ll turn me into the Hulk, but if the Hulk had slumber parties and highlights and a Starbucks addiction.

I shouldn't stereotype straight girls, because I hate being stereotyped. I’ve seen plenty of stereotypes in the colorful pages I drooled over as a kid, a lesbian sidekick thrown in to make the comic book seem more diverse and “woke,” or to make an AU more interesting, or plain and simple fan service. Any woman-on-woman action (as the store owner called it, his pimples gleaming as he grinned) reeked of men; men drawing, men writing, men looking — because only men enjoyed that kind of stuff, right?

But it’s almost too easy, with her. I mean, look at her; the converse, AirPods nestled in her ears like baby birds in a super-expensive nest, a scrunchie (yellow with pineapples on it) around her wrist, probably on her way to study at Barnes and Noble and eat a cherry danish.

Stop looking at her.

There’s nothing “too easy” about looking at her, about sitting next to her, about still feeling the ghost of her Is that yours on my cheek.

Just as I’m ordering my ears to stop being so red hot and the electricity beneath my skin to dissipate, she pipes up, unafraid and a wizard with small talk, as if she hasn’t even noticed how strange the silence was, how calculated my face and eyes remain, how my hands are leaking sweat onto the sketchbook page.

“My name is Summer.”

She smiles, radiant despite my childish stammering. “It’s nice to meet you, Jean.”

And her saying my name shouldn’t make my stomach crumble to post-Snap dust, or fall through the bench and land on the sidewalk beneath, shouldn’t drift to my sketchbook in lines that almost shape themselves into Why do you have to make me feel this way when I know I shouldn’t?

I’ve never known what it feels like to be a hero.

But I’m plenty familiar with what it feels like to wear a mask.

And she’s so deliciously ignorant to everything I’m feeling or trying not to feel, letting her safe, polite thoughts make themselves known to the world, like warm breath on a wintery window, like its so easy for her, and I think GOD it must be so nice to not have to think so hard about everything all the time. To just have things come naturally to you.

I can try to “walk the walk,” hell-bent on taking the “straightest” path through life, and I trip because my shoelaces are inexplicably tied together even though I never tied them, they were just always like that, confused and different from everyone else’s.

And I wish my existence weren’t wedged between a pair of fucking air-quotes.

“Are you an artist?” She asks.

“No. Well, yeah, but… well, I—” I stammer stupidly, but she smiles gently, like a kindergarten teacher correcting her student’s adorable mistake.

“I wish I could draw like that. You’re really talented.”

“It’s okay, I have trouble taking compliments too.” I feel like I shouldn’t believe her — when has the world given her any indication that it wouldn’t bend over backwards for her, kiss the ground her conversed feet walked upon — but there is truth, somewhere in her face, nestled in her cheek.

Maybe I’m not the only one who wears a mask.

I always used to laugh at Clark Kent’s glasses — how could no one tell that this dude was obviously Superman — before I realized that you don’t really need a disguise, if you’re normal. You blend right in with everybody else.

I always thought it would be harder to be permanently and visibly marked as different, with alien skin, a hazardous gaze, gills or fins, glowing fingertips, a body that blinks in and out of existence. But maybe being supernaturally invisible is easier than being normal, because at least then you know why no one is looking at you, why no one speaks your name or looks for you in a crowded room.

Her question intrudes, as awkward as I feel. “Do you think you could draw me?” Her eyes are like bright whirlpools, sucking me in and swirling me in circles until I’m utterly lost in them.

“I… Yeah, I could. We probably don’t have much time though.”

Her smiles come easily to her; she hands them out to the world like clouds deliver rain. “We have time. The bus is scheduled to be here right now, which means we have at least seven minutes before it actually shows up.”

“Fair enough.” I flip to an empty page in my sketchbook (of which there are very few, now) and realize my hands might still be too shaky to even draw. But I try anyway, tracing the soft oval of her face, the hair that swoops down effortlessly but flawlessly, the thin eyebrows that look almost too small for those huge eyes.

I stare at her, unabashed, and the warmth spreads through me without me even realizing it, easing my nerves and shaky hands.

As the lines of her face translate to the page, I begin to recognize her beauty, the symmetry of her face, the evenness of her skin. But I also find the flaws, the slightly crooked smile, the pimples that hide surreptitiously at her hairline, the spot where her makeup collides with her true skin-tone, which is just a bit lighter, less vibrant. She is being translated into a language that I can understand; I become fluent in her. As I shade the depths of her contours and highlight where the light bounces off of her skin, a realization clicks into my being like a delicate key, easing open a lock that I didn’t know was there.

I’m not ashamed of looking at her. She’s worthy of being looked at.

I hear the labored breathing of the bus as it rounds the corner and huffs to a stop beside us. She glances at it, and looks nervously back at me.

I answer by flipping around the sketchpad to show her. Her face shines with more complexity and radiance and life than I could ever capture, and I wonder if she’ll hate it because she’s clearly so much more than the drawing.

“It’s really good,” a breath of an answer, which rings more true than any loud exclamation of my artistic prowess.

For the first time, I smile back at her. “Thank you.” 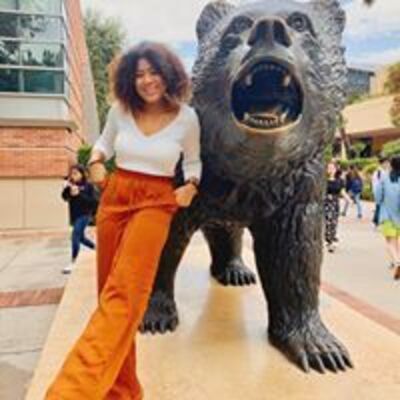 Thank you so much for reading Autumn! :D