Have you seen my blue book?

"Mom, have you seen my blue book? The one with Blue Falcon on the cover?" asked Nathan one afternoon. "Which one?" asked Mother, “ you have so many!” Nathan shot our mom an evil glare. “You’re not even listening!” “The blue comic with Blue Falcon on it!” shouted my little brother. Mommy sighed, “Oh, that one.” “Yeah?” said Nathe hopefully.

“Well, I haven’t seen it today, but I remember you said you took it to your dad’s company at bring-your-child-to-work-day hoping someone would be interested in polishing it.” That was all I needed to hear. Any moment now, I thought as I raced to my room. My brother Nathan (Nathe for short) could have a breakdown anywhere, especially when one of his comic books are missing from his huge collection.

When I say huge, I mean jumbo. His comics stack up from floor to ceiling, four times! Anyways, outside of my room, I could hear yelling, screaming, and occasionally hitting and kicking. Then, I heard mom’s hurrying footsteps to the bathroom to throw up. If you thought she was pregnant, right-o! The third child was soon to be born in the Adams family. Poor mom, I thought. I went out to the hallway, where I could hear the sounds loud and clear.  “You know, comic books are a little too stupid for a middle school anything.” He seemed concerned for a minute, then screamed, “well, you know I’m special. I’m not anything, I’m anyone!” I went back to my room, careful not to tip over his comic books on the other side of the room. Yes. we share a bedroom. But it does have a big sliding door that separates the sides. I decided to shut the door before you came bursting in. A close call, I thought as Nathe kicked the walls and punched his pillow. “I want it!” he shouted between punches, “Where is it?!” he screamed between kicks. I sighed. That’s what it’s like to have a comic-loving autistic brother.

The next day, while going to school, I went to the comic book store to buy a copy of the book. Luckily, I found the exact copy of the Blue Falcon book. Back at home, I checked to if Nathan was in our room. “Great,” I thought. I put it somewhere my brother usually didn’t notice and pretended it was there all along. Finally, my brother found the book. He took it back to his side, read it over, and walked over. “Where did you find it?” he asked. After I told him, there was a long silence. “It’s not mine,” he finally said, “Mine has my boogers on page 367.” Oh crud, I thought and gagged in my mouth. Just as I tried to make an excuse, Dad came home. He kissed mom twice, once for the baby, patted his sixth-grade comic geek on the head, hugged his eighth-grade daughter, and went to take a shower. Mom went to the kitchen and got dinner ready for us when Dad came out of the shower with a towel on his waist and said, I have something for you Nathe. He went back to the room and took something out of his suitcase. Out came a blue book. With BLUE FALCON on the cover! “All nice and polished,” he said. I hugged him harder than before. Nathe took the book, looked through it, and asked, “where are my boogers on page 367?” Dad laughed and said, “ No wonder my coworker gagged while polishing.”

That night, Mother felt ill. Daddy quickly rushed her on the car while I grabbed the suitcase mom packed a month ago. Sure enough, that night Mom gave birth to a healthy baby boy. Dad was so happy he cried tears of joy. In bed that night, I heard Nathe murmur himself to sleep. I smiled at him before I closed my eyes, saying goodnight. Mom and dad are at the hospital with a new baby. Our baby.

The next day, I found myself sleeping on a pile of books. Nathe, you’re dead, I thought. Just then, I smelt the familiar aroma of Mom’s delicious pancakes. As I passed Nathan’s side of the room, I screamed, “I hate you, Nathe!” My back felt so sore sleeping on the pile of books Nathe put me on just so he could act out the jumping-across-the-river column of his comics. As I walked into the kitchen, I was surprised to see my little brother standing in front of the stove, not my mother. “ Where’s Mom,” I asked him. “She’s not home yet.” “Then who made the pancakes?” “Me. I thought you screamed something upstairs.” I froze. “I was just saying how lucky I was to have a cute, little autistic brother,” I lied, squeezing his cheeks. “Extra pancakes for you today sis!” “Yay!”

Just as I finished the last pancake, I heard the sound of jingling keys, opening the door. I quickly ran to the door, excited to see my baby brother for the first time. Outside, I saw my parents, uncles, aunts, cousins, and best of all, a blanket that my baby brother was wrapped in. “He looks like my favorite character on issue #1095 when he’s in that blanket!” yelled Nathe. I laughed. Just then, I saw one arm come out of the bundle of the blanket. Then another. And another. Out came the last one. I looked at my parents. Suddenly, the crowd including my parents started laughing. When they finally calmed down, my mother told me to look inside the cozy cloth. Inside, I saw not one baby, but two! “We had twins!” Daddy said. I smiled. Just then, Uncle Bernard said, “Can we go inside? I’m a little squished.

Once inside, my family talked about possible names for our button-nosed twins. After each one, one of our aunts would say, “got any questions about the name?” Each time, no one answered so gradually, the aunts didn’t ask. Just as the last suggestion was said, Nathe said, “Just one question.” everyone looked at him. “Has anyone seen my green book with Hulk on the cover?” That was all I needed to hear. Any second now, I thought. I quickly shut the sliding door, then my door. “Here we go again,” I murmured. 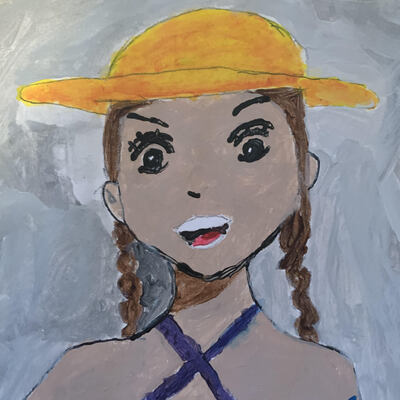 thank you for liking this story!