That certainly wasn’t intended for me.

I lowered my newspaper and saw a man sitting in the formerly empty seat at my table. An unusual thing to do in a not-so-crowded Starbucks. The man grinned as he stared at me. The slight wrinkles on the corners of his mouth and the hint of grey in his unkempt brown hair told me this guy was middle age.

If I were a violent man, I’d have punched him by now. It took me a moment, but I realized what he was doing. “A joke?”

“I don’t have time for-” I stopped myself and sighed. I’d been on this planet long enough to know that in a case like this, it was easier to give in than to argue. “Fine. Who’s there?”

“Orange you glad I decided to sit next to you.”

Maybe I would punch him.

Seeing my blank face, he tried to explain further: “Orange... Aren’t? Aren’t you glad I decided to sit next to you.”

“That I certainly do not.” I had no clue why a man his age would sit at an occupied table and tell an older man a stupid joke.

“Why would I want to talk to you?” I didn’t mean to sound offended, but I did.

“I didn’t come here to make new friends,” I told him. “I came here to get a break from my family.”

I hated betraying them to a stranger. As much as I loved my wife and children, our home life was constant chaos. The kid’s activities schedules were more complicated than calculus. My wife and I constantly fell behind in house maintenance and laundry. And it all seemed amplified on the weeks I had to work overtime.

One night my wife and I agreed we were going to snap if we didn’t give ourselves a little “me” time. So once a week she covered for me while I skipped out the Starbucks with the newspaper or a book. And once a week I manned our rocky ship while she saw a movie.

So the last thing I wanted to do during my free time was deal with this adult child.

“Things happen when you least expect it,” he said.

“That’s nice,” I pacified him and went back to reading my paper.

“But it’s happening now,” he said excitedly. “With me.”

“I’m sorry,” I spoke without lowering the paper. “I’m not interested in what you’re selling.”

“I’m not selling anything.”

“That was my polite way of saying: Go away.”

He didn’t.“We could be best pals.”

“But you had to get away from them.”

“For some alone time.”

I flipped down my paper and shouted at him: “I don’t want you here.”

“OK,” he said nonplussed. He continue to stare at me, expressionlessly. I preferred his creepy grin.

I calmly told him: “I want you to leave.”

“What else could I-” I stopped myself as I was shouting again. This man wasn’t worth giving myself a heart attack.

“You need a best friend.”

“My wife’s my best friend.”

“A real best friend. I can be that. I’ll bring you flowers and candy.”

I laughed. “Are you looking to be my best friend or my boyfriend?”

Ignoring the strangeness of that last suggestion, I decided this man needed parental guidance. So I turned on the “Father Knows Best” voice I used when speaking to my children. “Listen, there’s lots of places you can go to make new friends. But wandering up to strangers in coffee shops is not the way to do it.”

“Why not?” he asked like one of my kids.

Out of pity for this lost soul, I suggested: “How about joining a book club, or a church group, or one of those foodie meet-ups?”

I wanted to scream: “You have to eat.” But managed to say it in a rational tone.

“I don’t want you to do anything for me.”

“I’m not your friend!” This time I did scream, attracting the attention of the other patrons.

“I know it’s tough for men to show their emotions.”

I thought I was.

“We’ll learn how to get along together,” he continued. “Like a buddy cop film. Do you like movies? We should go sometime.”

“I’m not going anywhere with you.”

There was no stopping this guy.“There’s something seriously wrong with you.”

I stood to leave.

He jumped up excitedly. “Where’re we going next?”

“I’m going to the bathroom.”

“I have to draw the line of our friendship somewhere,” he laughed.

Finally, some good luck. “Happy to hear that. I’ll be right back.”

I grabbed my newspaper.

“You can leave that,” he said.

“I need to read something. If you know what I mean?”

“You’ll have to let me borrow some sometime.”

He watched as I walked down the hall to the bathroom. He didn’t know there was an exit back there. I practically ran out the door and toward my car.

While exiting, I drove past the Starbucks and looked into the window. The strange little man sat waiting for my return.

I stopped, much to the dismay of the cars behind me.

How long before her realized I wasn’t coming back?

Minutes passed. Angry cars drove around me. Profanity was spewed. 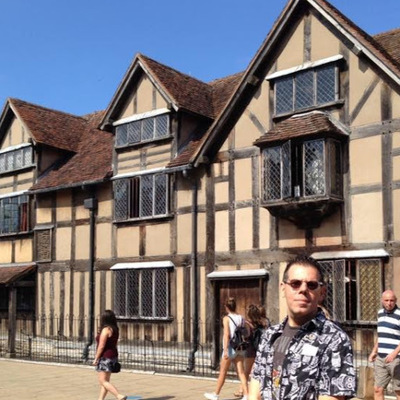