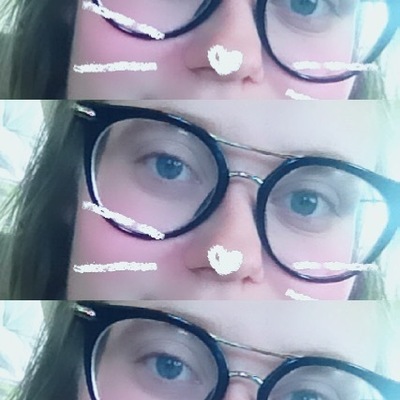 Sally was tired, she wasn't sure what she was saying, thinking, or doing. As many of us know, when you are this tired you often stop filtering your interactions with other people. Such a problem was currently ailing Sally.

Sally tried her best to be interesting and noticeable. Most of the time she was able to keep her mouth shut at the right time (when her funny outbursts began to be concerning instead of endearing). However, this time, she was unable to filter and continued talking.

She had been meaning to make a joke when she said, "I may have killed a man once...but you cannot tell the preacher," followed by, "for if you tell the preacher I will never again be able to feast on the flesh of one of his brother's." This phrase was concerning, but could have been covered up by a nicely placed laugh or exclamation of "kidding" but neither one happened. Instead, Sally, who I have been introducing thus far, was unable to form any further sentences and passed out.

Jenny, a sweet girl who often dealt with problems caused by her friends, was now in a mess. What was she to do with the knowledge she had just received? Could it be a joke? Perhaps it was merely a joke, perhaps Sally was just overtired, but also perhaps it was true and now Jenny had an obligation. Was it truly an obligation for her to discover the truth and tell the preacher? Or was it more of an obligation to keep her friend safe?

Jenny struggled for days and didn't say a word. Literally. She found that if she talked she would start to spill what had happened. So she did. Not. Talk. Until Sunday when she went to church, sitting across the aisle from a much more sane and much less sleepy Sally. Jenny decided it was probably nothing but a joke, realizing that her friend was just a normal person who truly did need sleep and truly did not kill the preacher's brothers.

As soon as Jenny had made this discovery the preacher began to speak, "My friends, I am so sorry that my sermon may not be what it could be. I have mourned the losses recently of not one, but two of my brothers left me. I do not know or understand why or how they were able to do this, but I shall try and not allow this to affect anything..." Jenny was unable to comprehend anything she had already heard or was hearing presently.

What was she supposed to do? She couldn't very well tell the preacher because Sally would probably be in trouble. She also couldn't tell the preacher because Jenny was a kind girl, not a girl who enjoyed telling preachers that they know who has killed their brothers. So Jenny kept quiet as long as she could. Making her way out of the building and halfway across the street before one of her church friends nearly ran her over.

Jenny accepted the offer of a ride with a nod of her head and clumsily climbed into the car. After a full minute of silence, Jenny broke, as most people would after finding out their friend is a murderer. She told everything and didn't try to make any excuses. The rest of the ride was silent, other than the quiet sobs from Jenny. After leaving the car she felt relieved, perhaps that was the fulfillment of her duty to her friend and society, so she went on her way pretending her conscience was clear.

AnnaZelle was a meddling married woman, she prided herself on prying things out of people. She even prided herself on prying Jenny's secret out of her, although Jenny was the one who chose to talk out of the silence. Unfortunately, this meddling AnnaZelle was mean and not as kind as Jenny. Unfortunately, this also meant she needed to choose which side she was on.

AnnaZelle didn't decide what to do and continued home, wanting further insight from her equally aggressive and only slightly less meddling husband. Henry was a man who loved three things, his wife, his kids, and arguing. As arguing had been with him since birth he did tend to love it a little more than the other two things. In this case, however, his arguing ended up making this story longer and more enjoyable and thus he may be the hero of the story.

After AnnaZelle got home she immediately set to action. Probing the mind of her husband on the cases of Sally and Jenny and the (as proclaimed by Henry himself) ignorant pastor. The conclusion of Henry's knowledge was to go to her friends at a specific luncheon happening the very next day. Of course, this idea seemed the most logical, as none of those people would be able to do anything to help but would get a kick out of spreading the gossip. And thus AnnaZelle took not only her best hat but also her fresh gossip to the luncheon.

As none of the people truly cared for each other at a luncheon of old meddling women AnnaZelle found it certainly difficult to share her news with any people without all of the people knowing about the event. Eventually, she was able to begin sharing with the ladies who were held captive at the same table as her during sandwiches. As she told her weaving tale she was able to make the story even more interesting than the one she had been originally told. Everyone knows that a story such as this needs the main character, in this case, Sally, to have threatened someone, in this case, Jenny. And everyone knows that if you tell a story with yourself embedded in it you must show yourself as a hero. And thus, Sally threatened that if Jenny told the preacher that she would hit her with a car. And of course, as the car sped toward Jenny AnnaZelle was at the perfect spot to offer her a swift ride away from impending doom.

Many of the ladies were sure parts of the story were falsified, but now they could tell the exciting news and merely point back at AnnaZelle if any problems arose. And so they went on their way, spreading and sharing. The story morphed to where AnnaZelle had seen the actual murders. Or Jenny had been present and stopped Sally from stabbing the preacher right in the middle of the church and had taken the knife wound herself. Wherever the story went, the teller made it grow and grow until it was an alarming tale destined to be the next big action film.

Of course, when enough people hear about some disaster event someone logical is going to get wind of it. And by logical, I mean sheltered and gullible Cindy. Cindy had grown up not understanding the world except through the lens her mother viewed it through. She knew the right to be right and wrong to be wrong. But she didn't know much about gossip. However, she knew that the right thing to do when you hear about someone murdering someone else is to tell the police directly. And so she left to the police department immediately, without a care to what people thought of her or what the consequences would be.

The police, as any good policemen do, understood that this could be a rumor or a hoax, but took it seriously as much as was possible. Unfortunately (or perhaps fortunately for our story), one of the men on this force happened to be a little of a gossip himself. He went on his way, sharing the news of what was happening with many of his friends and colleagues. Many of them spread from there, and, eventually, the news got back to a nervous and confused Sally.

The last I saw of these poor gossips and our poor Sally they were all confused and angry, yelling at each other in a courtroom and unable to prove whether Sally was guilty or honest.

However, if they had cared to ask the pastor (who was sitting in the hall with me) they would have understood that not only did Sally not kill his brothers, his brothers were not in fact dead. The statement he had made in the church was a tired and angry statement because his brother's had moved away from home. But he wasn't going to tell them, no, this was all too exciting for him to ruin the fun of a few gossips and loudmouths.

And so I leave this story, but you could take this story and share it. Perhaps you found this on Wikipedia as fact. The truth is, fiction is only fiction until enough people believe it. Then it's called gossip. And who can blame you for spreading it?