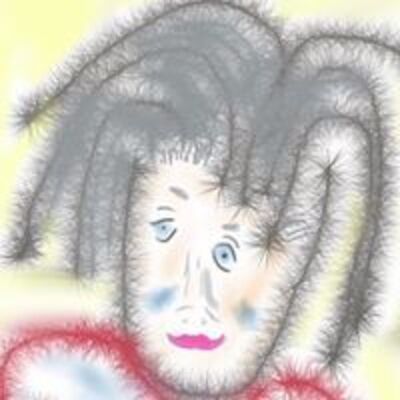 I’m not an extraordinarily vain person, but looking ridiculous in front of a classroom of university students adds to the challenge of establishing and maintaining a relationship of mutual respect, essential for effective classroom management. Taking risks with a haircut is something I steer clear of. As a matter of course, I am risk averse, and I stayed true to my risk averse nature time and again, when on my daily walk to the station, I passed the barber shop with its robot standing guard beside the door.

I passed the New Apollo, as the barber shop was called, for more than a year on my way to work before the attraction pulled me off my course. The robot pole with its white and blue and red stripes revolving slowly, the robot head hammered in aluminum, with its internal light bulb leaking light from under its chin and shining out through two red glass eyes pressed into its aluminum face gradually pulled me in. A bent antenna apparently removed from a derelict automobile, leaned sadly towards the street from the top of the robot head, pretending to pick up alien broadcasts from somewhere out in space.

A profusion of flowering plants crowded the base of the robot, filling every inch of sidewalk right up to the door. Above the tallest plant, ‘pachina’ according to the plastic label stuck into the pot, was a blue 'Save the Kids' plaque hung from a hook nailed into the soiled beige stucco wall of the building. Above that, was a molded deer's head cradling a glass analog thermometer within its antlers, the needle stuck on zero, not quite reflecting the torrid Tokyo summer weather. Posters, including one depicting the year of the rat, plastered every inch of the store front. Even with the door open, it was difficult to see into the dark interior of the shop and I had never seen a customer enter or exit the place, but gradually a curiosity drew me in despite my foreboding.

I wouldn't have entered if I'd known the price. He was charging four thousand yen which was the same as the hair dresser I’d been going to for years and who I knew could handle my thin Nordic hair. The old barber cut the price from four thousand to two when I said I only wanted a cut, no shampoo. After I sat in his chair, he covered me in five layers of towels and sheets. He worked silently and slowly, starting at the base of my neck, and it seemed to me he was there forever, eventually getting around to the top of my head where he made one or two snips. He made his cuts carefully, each cut taking a full second, sometimes longer. When his fingertips hovered in front of my eyes, I noticed they didn't shake, which was reassuring. I held my pose rigidly like a statue, not because I worried he might clip my ear off, which may have been a danger, but because it seemed appropriate to the solemnity of the occasion.

It was late June, and the oppressively hot Tokyo summer was well underway; however the door to the shop was open to the street, and the old barber relied on an ancient floor fan with its rusted steel enclosure around blades pushing lazily at the air. A sound I couldn’t identify came from behind me the whole time I held my statue pose in the barber chair. I supposed it came from the old fan because there was something electric about it, but also something grinding, and it didn't sound cyclic in the way of a floor fan sweeping from side to side. It was first a steady sound which went on for a time, then faded, then came on strong again with a metallic grinding.

The barber was old. The knuckles on his hands protruded like burls on the trunk of an old oak. His speech was slurred as if he were speaking one of those hard to understand dialects from fishing villages in the far north Tohoku. The old man's wife, or perhaps it was his sister, sat on the edge of the raised platform that marked the entrance to their living quarters at the back of the shop. The whole time the old barber worked, she sat watching, never saying word, merely keeping an eye on the old barber, perhaps in case he dropped his comb or scissors, or maybe something worse. The shop, like the barber himself and the old woman, was worn. Everything seemed on display like one of those mansions on the Hudson River where you look into the bedroom of a former owner. The bed is covered just as it was when he was alive; the hairbrush and writing pen just so on the side table.

Here it was a collection of ancient combs and scissors, and an old folding hand mirror partially open, revealing aged sepia-tarnished glass. Strangest of all, what looked like some kind of brush resting on its wooden back, something like a shoe brush but with enormous dark black bristles from some animal rising six inches straight up.

The old barber didn't wear eyeglasses. When he held up the folding mirror for me to inspect the back of my head, he opened it carefully and slowly and gave me plenty of time to look at what he had done. I didn't tell him that I couldn't see without my glasses, and just said it was okay. I wanted to ask more about his history, but, although his eyes were clear and his hands steady, his speech impediment made him sound almost as though he had had a stroke. I hadn't yet had a chance to see what kind of a job he had done on my hair and I began to worry. I was concerned when he’d spent so much time on the back of my head and so little on the top, and began to imagine I'd grown a tumor that kept pushing up fresh hairs as he clipped them down. Then, when it took him so long to get to the top of my head, I began to hope that he hadn't had some kind of retinal occlusion, making a whole hemisphere of his visual field opaque.

I wanted to talk to the barber about how long he’d been there, how he’d gotten his start, but his diction was hard to understand, and I was afraid to disturb the old man. Finally, partially to try to get a handle on the old barber's age, I asked, "Is this your shop?"

"Yes," he mumbled and went on saying something else I couldn't make out.

"Have you been here long?"

The answer was in a Japanese so garbled and strangled, it was hard to understand much of what he said, but I caught the number fifty. So, he'd had the shop for fifty years. I wondered how old he’d been when he started.

The strange sound coming from behind me when I was prisoner in the barber’s chair, I found after I was released, was coming from the old barber pole with its robot head and red glowing eyes, the red white and blue of the pole revolving, then hesitating, then revolving a bit more with that grating stop and start sound I'd been hearing the whole time the old barber was working on the back of my head. I stepped out of the shop and watched the red white and blue spirals twisting slowly, counting off the remaining seconds of the old man's life.